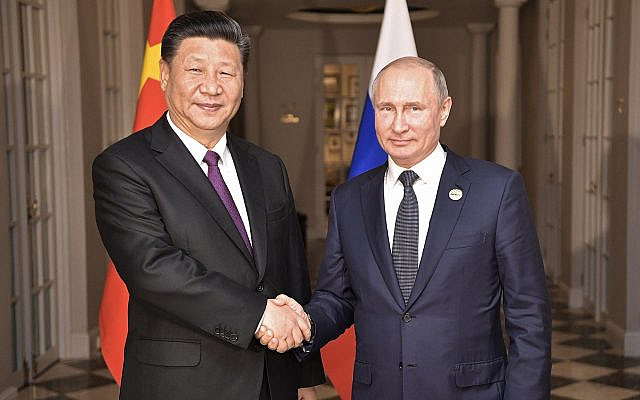 The severe losses of men and material and the significant battlefield reverses suffered by the mighty Russian Army in Ukraine should serve as a stark warning to hawks in Beijing harbouring fanciful dreams of taking over Taiwan by force. The tenacity demonstrated by Ukrainian forces notwithstanding, the objective fact remains that today’s era is not one where a larger power can simply gobble up a smaller one, while the rest of the world watches and faintly protests. The era of imperialistic ambitions and grand galactic wars is passé.

It is evident now that today’s intractably interconnected world, with deep commercial, technological and people-to-people linkages, is not one where brute force can be used to achieve political objectives. The interests of the entire community  of nations are aligned towards peace and human advancement now, and threats of the use of force do not go unanswered. Russia has now found itself in a costly war of attrition in which it can now hope for nothing beyond a pyrrhic victory.

Beijing’s incessant rhetoric on Taiwan is eerily similar to Russia’s irredentism. China is keenly aware that any military attempt to change the status quo on Taiwan will immediately invite harsh economic sanctions against the Chinese economy on the one hand, and abundant military and financial aid to Taiwan on the other. The PLA Armed Forces may be the second most powerful in the world, but they cannot afford to fight a war of attrition against the Taiwanese backed by the EU-US-NATO combine, specially with crippling sanctions which will affect its economy. Learning from the pandemic and now from the Russian attack on Ukraine, the democratic world is already working hard at supply chain resilience.  While India is one manufacturing and market option, very silently Israel is the technology hub for high end computing and chip manufacturing.

In addition to this overall grim strategic picture, the layout of the potential battlefield too is alarming from the Chinese point of view. Unlike Ukraine, where the Russian Army can reliably bank upon ground lines of communications and supply, any Chinese campaign in Taiwan must necessarily be naval in nature. China is ring-fenced by not one but two chains of islands, not all of which are necessarily predisposed in Beijing’s favour. The PLA Navy may boast of having the largest fleet in terms of the numbers of vessels it operates, but it is no match for the US Navy – a technologically advanced behemoth with ten aircraft carrier battle groups, against the PLA Navy’s paltry two. This inherent disadvantage on the high seas, fighting on which is something the PLA Navy has no credible experience of, is a significant deterrent to Chinese ambitions in Taiwan.

Likewise, given the fact that any campaign in Taiwan must necessarily involve the extensive use of seaborne and airborne forces, air superiority becomes a paramount consideration. Even in Ukraine, the Russians have not been able to establish air superiority in the face of advanced Western air defence systems supplied to the Ukrainian forces. In Taiwan, doing so would be many times more difficult than in Ukrainian airspace. It is common military wisdom that invading an island requires a multiple times the force commitment vis-a-vis a contiguous land area.

Chinese military planners would be well advised to understand the levels of force attrition and military losses that a campaign in Taiwan would entail. Lessons from Ukraine must be learnt and Beijing’s policies should be designed in a fashion that leads China away from a military quagmire and fiasco in Taiwan, instead of towards it.

After a u-turn on its “zero-COVID” policy, China is already facing criticism for its lack of effective vaccination of its population and lack of transparency with the rest of the world on COVID data. The global community is now preparing to counter any aggression by China on Taiwan as it is an expected move. Maybe this will convince Beijing to maintain the status-quo?