The Blogs
Yaakov Menken
Managing Director, Coalition for Jewish Values
Apply for a Blog
Advertisement
Please note that the posts on The Blogs are contributed by third parties. The opinions, facts and any media content in them are presented solely by the authors, and neither The Times of Israel nor its partners assume any responsibility for them. Please contact us in case of abuse. In case of abuse,
Report this post. 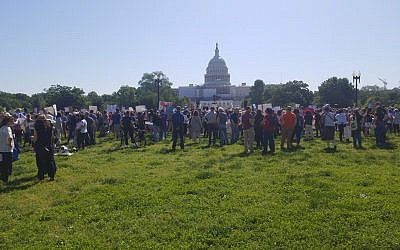 By all accounts, last week’s “Jewish Rally for Abortion Justice” was a dud. Public support failed to materialize, despite the rally’s backing from many of America’s largest Jewish organizations. The Forward, a staunch bastion of left-wing thought, generously suggested that “roughly 1,500 Jews” attended (though how they knew which were Jews is anyone’s guess). In reality, even the Washington Post and Jerusalem Post’s mutual estimate of “over a thousand” seemed excessive. But either way, the barriers and security were set to accommodate a crowd several times its actual size, and besides the hometown paper, the rally garnered no significant coverage outside Jewish media.

Even The Forward’s overly-optimistic assessment amounted to barely a minyan (10 people) per sponsoring organization, though these organizations claim to collectively represent millions of American Jews. Clearly, the notion that “banning abortions is a religious freedom issue” failed to galvanize the Jewish public, and this is instructive precisely because the sponsors spanned the gamut of purported “representatives” of non-Orthodox American Jewry. What was billed as a unified show of strength revealed that the edifice of the American Jewish establishment is on the verge of imminent collapse.

The Times of Israel reports that organizers tried to “emphasize how diverse the support for abortion access is.” They did this by introducing, to outsized applause, “Orthodox” rabbis and Maharats whose Orthodox bona fides are rejected by every recognized Orthodox rabbinic group. This was a fool’s errand, because no one was fooled. Truly Orthodox institutions were conspicuously absent from the list of sponsors, and as I stood spectating, without signs or placards, it was obvious from attendees’ reactions that they knew full well that my sympathies did not lie with them, simply because I look identifiably Orthodox.

The involvement of many of the participating organizations is itself revealing. The Anti-Defamation League’s stated mission is to fight antisemitism, and it is not as if that problem has been ebbing of late. Hillel International exists to support Jewish life on campus, while T’ruah exists to oppose Jewish life in Judea. Jewish Community Centers are where you go to work out on a Peleton and take a dip in the pool. And Jewish Community Relations Councils are supposed to represent the entire, unified Jewish community on issues of common interest. Yet all lent their names to a demonstration opposing the Torah’s position on a serious moral question, while claiming that what they supported was a “Jewish value.”

These organizations clearly felt it was an urgent priority for them to support access to abortion as a “religious” issue, though, notably, none of the foregoing have been at all vocal on behalf of Sabbath observance, keeping Kosher, or learning our holy texts at any serious level. The failure of the rally shows that the adoption of the cause du jour as a new “Jewish value” no longer holds traction. Did people not respond because they felt no enthusiasm supporting abortion, or no enthusiasm supporting those Jewish organizations? Either way, these “leaders” clearly lack followers.

This is not really a new lesson; redefining Jewish values to suit current mores has never worked. But it is clear that it needs to be learned in our day, because non-Orthodox Judaism is imploding at an increasing rate, both in America and around the world. Besides that more than half of non-Orthodox American Jewish young adults now describe themselves as “Jews of no religion,” the rally showed us that the allegiance of even those claiming a Jewish identity is paper thin.

That Judaism has lasted is an historical miracle. There is no religion or culture that has faced any similar level of persecution, and survived. In fact, it is the dominant cultures that once surrounded and often oppressed the Jews that have faded into history, while Judaism itself continues to thrive.

But the definition of “Judaism” that thrives is the one we were given 3,334 years ago (as of Shavuos, just weeks from now), the one that accepts the Torah as the sole arbiter of “Jewish values.” Movements which have attempted to change our beliefs or priorities have fallen by the wayside throughout our history, and that is what we observe playing out once again today. Only by following the path do we remain, and it is urgent that those valuing a Jewish future for their families once again proclaim their allegiance to our true and eternal Torah.

About the Author
Rabbi Yaakov Menken is the Managing Director of the Coalition for Jewish Values, representing the voice of over 2000 traditional rabbis in matters of American public policy. He is also the Director and Chief Architect of Project Genesis - Torah.org, and co-founder and editor of Cross-Currents.com.
Related Topics
Related Posts
Comments