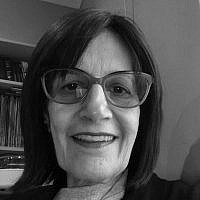 The Blogs
Hinda Lewis
Apply for a Blog
Please note that the posts on The Blogs are contributed by third parties. The opinions, facts and any media content in them are presented solely by the authors, and neither The Times of Israel nor its partners assume any responsibility for them. Please contact us in case of abuse. In case of abuse,
Report this post.

Despite the memes, the feel-good blogs and the new recipes our families have enjoyed (who else couldn’t buy flour, as well as toilet paper?) we are still in a disaster of unbelievable proportions.

Now in the interest of full disclosure: I am a born and bred British citizen. So when I say the rules governing exiting & re-entering Israel are particularly harsh for Brits, well, I can hardly be blamed for taking up the cudgels on their behalf.

You see, dear readers, many of those British citizens who chose to make Israel their home (pre Corbyn panic) as well as Israelis who are in UK for business/educational/vacation/ medical reasons are literally stuck in the UK. They can’t leave. Some MAY be able to get back to Israel if this ishur business is resolved. *Alex has tried 4 times to get back – his father has cancer. He thinks his quadruple rejection was because he also stated he wants to vote. As he says, maybe he should have said he wants to vote Likud.

*Tamar has a very young child back in Israel (she came to UK for a 10-day vacation with her friend in December) and can’t get back. She has health issues and has run out of her medication. Her travel health insurance ran out. She spent everything she had on a cheap hotel but after booking another flight that was canceled, she can’t afford either to rebook on some emergency flight or to pay for a place to stay. With or without an ishur, her situation is problematic.

I disagree with James Marlow, who wrote last week that Israelis back home are helping to get Brits back. Not happening, certainly not on a government level. There are direct flights from New York and if reports are to be believed, direct flights from Kiev and Paris are likely to start on Sunday. Where are the direct flights from London? Why did I have to arrive in Israel via Frankfurt last night – but more of that exciting episode to come.

The Israeli embassy hasn’t done a thing to help us get home. I say us, because on February 23rd I wrote to Ambassador Hotovely and received a standard, nothing response from her personal assistant, When I persisted and replied to the non-reply, that was the end of any communication.

Now I may be wrong, but I am under the impression that one of the duties of the Ambassador is to help Israelis in distress in her country of assignment. Well, if that is the case, the Ambassador shows no sign of following this directive. And so I have to ask: why is she there? Israeli citizens in UK are suffering, separated from their loved ones, unable to be in their own homes, and no-one, certainly not the Ambassador or her staff, is doing anything to help.

I got back last night after a harrowing experience. Being a True Brit, I held it together despite the inconsistencies of instructions, including my Covid test being 37 minutes over the 48 hour deadline set by Germany… because that deadline applies to the time the flight lands, not leaves. Judging by the queues at the testing site in the airport basement, I was not the only one who didn’t get it.

When asked by Israeli security why I had been in UK for 2 weeks and only had carry-on luggage, the agent was shocked to hear I left everything at my mother’s because Lufthansa said they couldn’t guarantee my case would be checked through.

Dear Readers, I won’t waste your time by describing all the nonsense that went on between Frankfurt and Tel Aviv. But you should know the difficulties I encountered at Ben Gurion.

Border control officials are clearly not hired for their social skills. Since I’m technologically challenged, I couldn’t get the biometric passport machine to work and so I ended up at the “disabled” booth, where I was greeted by a woman who was clearly genetically engineered using DNA from Atilla the Hun and a prison guard. A very unpleasant experience but sadly, all too common,

After the screaming was over and I received my valuable red paper bracelet, I thought I was home free. Errr…no. A Corona test. Now I have a Green Passport, a paper from Maccabi saying I am good to go, a Corona PCR test result from Sunday, the antigen test result from earlier yesterday, and yet I STILL had to have sticks poke around my tonsils (I had onion in my sandwich, sorry) & rammed up my nose. And again, I was not the only person on the flight who wasn’t expecting this treat. A pretty orange paper bracelet and at last, I can leave.

I’m home now. No bidud because I had one vaccination then recovered from Corona. Of course, last night’s test was negative but if someone decides to change the rules and put me in bidud, they can just haul me off to jail. Someone needs to take a stand and I’ve never been one to run away.

I’m home now. But thousands of Brits are still stuck in the UK and they need help to navigate this insanity. If we wanted to be British in all ways, we would never have left to make Israel our home. To leave thousands of Israeli-Brits literally Stuck in the UK (there’s an amazing, supportive whatsapp group by that name) is at best a disgrace, and most likely, illegal.

Mr. Netanyahu is facing the fight of his political career. He could go to jail. Does he really think stopping thousands of us from getting back and voting is going to help? Is his appointee Ambassador Hortovely going to continue to hide in her office and ignore the plight of her countrymen? Will Minister Regev stop playing games and provide daily, direct flights from London?

It’s that time again, but this time it will be different; “Let my people go!” takes on a new connotation this year and we aren’t directing this demand to Pharoah.

Well, I hope not.

About the Author
Hinda and her husband made Aliyah from New York in 2013, but they were born and raised in UK. Hinda’s claim to fame is raising 6 amazing kids (who sadly won’t move to Israel) and being an activist on behalf of the Jewish community.
Related Topics
Related Posts
Comments