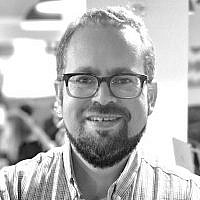 Rabbi Dr. Norman Lamm in a 2009 interview with The Jerusalem Post predicted that “with a heavy heart we will soon say Kaddish for the Reform and Conservative Movements.” This week an active blogger, Rabbi Harry Maryles, has declared the time has come to say Kaddish for Open Orthodoxy:

I say this with a heavy heart. But I think the time has come to say Kaddish for Open Orthodoxy. Kaddish is the prayer traditionally recited upon the loss of a loved one – like a parent or child. This is how I feel about this loss.

This call to mourn the death of fellow Jews, whether spiritually or physically, is accompanied by a picture of an actual living Jew, Rabbi Dr. Zev Farber.

Rabbi Maryles’ announcement of mourning comes on the heels of another article he wrote just a short while ago comparing Orthodox feminists to the sons of Aharon, Nadav and Avihu. If we recall those sons were killed by God for violating God’s will.

I would like to make a humble suggestion: Let us tone down the rhetoric and let us stop saying, or declaring we will say Kaddish for Jews who are very much alive.

A student of modern Jewish history knows that for the past several hundred years there have been numerous sharp disagreements between various sectors of the traditional Jewish community (both before and after the relatively recent adoption of the term “Orthodox”). These divides historically have revolved around many different issues: Hasidism, Zionism, the study of secular subjects, clothing choices, language choices and the role of women among a myriad of topics.

There has never been a single Orthodoxy. There has never been a single Orthodox center by which all others are defining themselves in relationship to. Whether it was German Neo-Orthodoxy and Hungarian Ultra-Orthodoxy or Lakewood Yeshiva Orthodoxy and Upper East Side Modern Orthodoxy there has always been a multitude of approaches and ways of reconciling traditional beliefs and practices with the current zeitgeist. One approach may very well be anathema to the other but that does not therefore invalidate that approach for someone else.

There is something very appealing about defining what we believe by staking out our positions in opposition to someone else. This path has the benefits of being able to employ fiery rhetoric, exclusionary politics, power dynamics and the lazy reasoning that the opinion of one person in the camp you disagree with can be used to discredit everyone in that community. It is also much easier to define ourselves by what we are not than by what we are.

Perhaps the time has come for the next blog post about Open Orthodoxy to not be about Open Orthodoxy at all. Let us hear about the values you do believe, the ideas that you are passionate about, the spark of Torah that awakens your soul and drives you in your sacred service of the Divine. Rabbi Norman Lamm’s Torah Umadda is one of the most profound articulations of Centrist Orthodoxy that exists. It inspires the reader towards his vision and values. It is almost impossible to put it down while reading it. A book, article or blog post that positively articulates one’s values can shape a conversion and advocate for one’s position in a way that a negative attack piece can never do.

So let us put down the prayerbooks for a shiva house, especially during these Three Weeks of Mourning and stop declaring other Jews should be killed instantly by God like Aharon’s sons or are indeed already dead.

The vast majority of Orthodoxy, within all the different ways that it is defined, lives in a world where they each join together to make a minyan at an airport or a simcha, where their children sometimes marry each other and where we have come to accept the great differences that exist within our broad community. The real world of intra-Orthodox inclusion is vibrant and wondrous and has no need for a mourners kaddish to be said for any segment of it.

About the Author
Ben Greenberg is a rabbi, software developer and educator. He has worked as a campus rabbi at Harvard University and as a pulpit rabbi in Denver, CO. He currently works as a software developer in Tel Aviv. He lives with his family in Israel and is originally from San Diego, CA.
Related Topics
Related Posts
Ben Greenberg
Comments