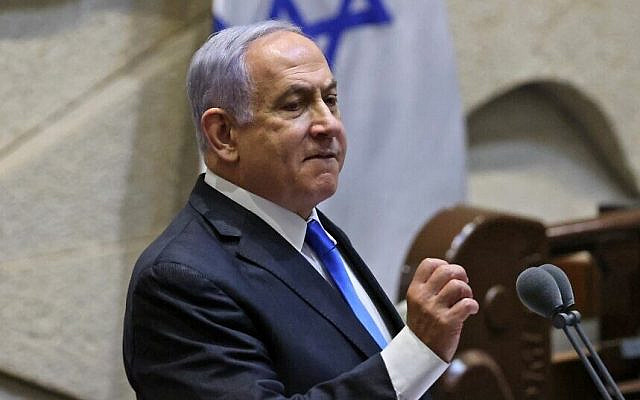 Israel's outgoing then-prime minister Benjamin Netanyahu addresses lawmakers during a special session to vote on a new government at the Knesset in Jerusalem, on June 13, 2021. (Emmanuel Dunand/AFP)

The tendency to equate the state with one’s person (expressed in the phrase ‘l’etat c’est moi’ [I am the state]) was a feature of the monarchies of Europe in the period during and after the Middle Ages. With the passage of time, the introduction of republics, democracies and various forms of constitutional monarchy that equivalence became a thing of the past, and today is identified largely with the seventeenth century French king, Louis IV (and to a limited extent France’s post-WWII president Charles de Gaulle). The phrase epitomizes the arrogance and self-importance of the person uttering it.

I have not heard those words spoken by Benjamin Netanyahu, but his behaviour in the latter part of his twelve-year ‘reign’ as Israel’s prime minister, as well as in the manner of his leaving that position, indicates that he may well think and believe it.

Indications abound of his supercilious and condescending, or even downright destructive, attitude to those who have acted to oust him from power. It started with his campaign to discredit the new government and its members. That having failed, it was evident from the behaviour of the Likud members of the Knesset when the incoming prime minister was presenting the new government’s policy to the House that a highly-orchestrated chorus of heckling, disruption and just plain name-calling was under way. Naftali Bennet was not allowed to complete a single sentence or phrase. While the Knesset Speaker did his best to keep the Knesset members under control, the task was obviously beyond him. The behaviour of the Knesset members put Israel as a whole to shame in its own eyes and those of foreign observers.

But that wasn’t all. Before leaving the Prime Minister’s Office Netanyahu instructed the staff there to shred documents. The full extent of the damage thus caused is yet to be assessed, but that is something that no responsible public official should do. In addition, the entire handing-over procedure from the outgoing to the incoming prime minister took all of half an hour, which seems unlikely given that Netanyahu was in office for twelve consecutive years. The customary ceremony in which the departing official wishes the incoming one success and good fortune in his/her role was omitted completely.

To top the begrudging handing-over of power, Netanyahu and his family declined to leave the official residence at Balfour Street in Jerusalem. It’s as if the defeated prime minister of Britain refused to leave 10 Downing Street, or the outgoing President of the USA would not go out of the White House. Eventually, it seems, some kind of agreement was reached and the Netanyahu family has been given a date by which it must vacate the premises. Don’t worry, there’s no need to feel sorry for them, as they have at least one apartment in Jerusalem as well as a fine house in Caesarea.

Sadly, it all goes to show just who and what has been behind the formation of Israel’s domestic and foreign policy for a very long period, with consequences that are visible world-wide. Not for a very long time have Israel and the Jewish people been hated by so many people in so many places.