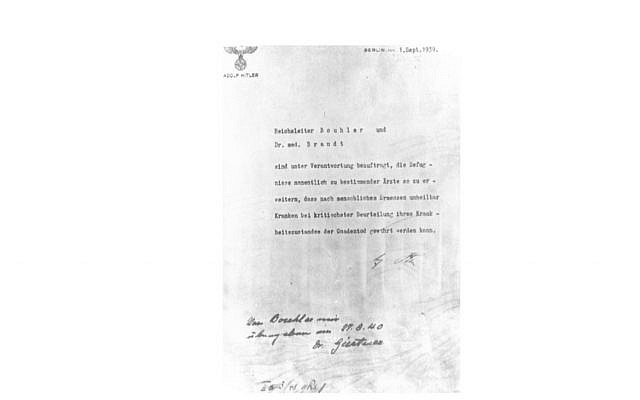 We in the Jewish world are now appropriately enraged over the Nazism promoted by “Ye” (Kanye West), who most recently praised Hitler for such false legacies as highways and microphones, among others. And yet, for committed Jewish abolitionists like us in “L’chaim! Jews Against the Death Penalty,” this brought to mind another Nazi legacy with which we contend on a daily basis: lethal injection. The important difference is that in our case, the connection to the Third Reich is indeed all too real…

Most Americans remain blissfully unaware that lethal injection – which is the most prevalent form of execution used in the United States, including by our own federal government – is in fact a direct Nazi legacy. Let there be no doubt: the first people in this world of ours to implement lethal injection were indeed the Nazis. One can find proof of this fact just down the street from where I live in College Park, Maryland at the National Archives and Records Administration. Here, one will find the document pictured above: Adolf Hitler’s signed authorization for the euthanasia program known to the world as Aktion/Operation T4. To be sure, lethal injection had been invented prior to the Third Reich, but it was the Nazis who were the first to take the awful leap of death by putting it into practice. The Aktion T4 protocol was led by Dr. Karl Brandt, the personal physician of Hitler, as one method to dispose of Lebensunwertes Leben, those deemed to be “life unworthy of life.” During the war, lethal injections were also administered to children detained at the Sisak concentration camp by the camp’s commander, the physician Antun Najžer.

In his medical journal article “Lethal injection: a stain on the face of medicine,” which can be found on the website of the National Library of Medicine in the National Institutes of Health (NIH), Dr. Jonathan Groner describes this protocol:

“Nearly 65 years ago, a government encouraged doctors to participate directly in state sponsored killing. In 1939, Adolf Hitler started the national “euthanasia” programme—code named “T-4”—with the purpose of killing physically and mentally handicapped patients. The killing facilities were designed on a medical model. A doctor examined new “patients,” and their vital signs were recorded. Nurses made certain that the patients’ beds were made up with fresh linen and blankets, and they offered sedatives or aspirin to patients who were uncomfortable. The killing—whether by lethal injection, poisoning, or gassing with carbon monoxide—was always supervised by a doctor. In the words of T-4’s chief administrator, “the syringe belongs in the hand of a physician.”

This history of this so-called “Nazi Needle” that is lethal injection should in and of itself give pause to the staunchest supporter of the death penalty. If it fails to do so, perhaps it might help to learn that the United States is now also utilizing Zyklon B, the gas used in Auschwitz, as a means of killing our prisoners. Arizona employs this gas by giving their condemned human beings the “opportunity” to choose this method over lethal injection – a veritable “Sophie’s Choice 2.0.” Meanwhile, other states have their own forms of American gas chambers. Here is a petition from Death Penalty Action that outlines the details of this horrific trend in our nation. For those who are unaware of this connection to the Nazis, it indeed is a shock to the system of American patriotism. As with the T4 legacy of lethal injection, we cannot afford to turn away from this truth, no matter how much more convenient it might be to do so.

Still others might argue that if lethal injection and the gas chamber are Nazi legacies, then we can still put individuals to death in other ways. Civilized humanity – including 70% of nations around the globe that have abolished the death penalty – would disagree. Indeed, other methods employed across the United States from hanging and electrocution to firing squad all have been deemed cruel and unusual punishment in various contexts and jurisdictions. It is a forgone conclusion that there is no viable way – by definition – to murder someone against their will.

Some may scoff at any connection implied at all between American capital punishment and the Nazis. We, the members of “L’chaim! Jews Against the Death Penalty,” however, are NOT afraid to call a spade a spade…nor a swastika a swastika. Many of us, like myself, are scions of Holocaust survivors and had innocent family members murdered by the Nazi regime and their collaborators. We know better than most that calling out the truth of the history of lethal injection is NOT equating capital punishment to the singular horror that was the Shoah (Holocaust). We also know that if the phrase “Never Again” is to have any meaning at all, then we are duty-bound not to ignore the lessons of the past. Among these lessons was the red-line of state-sponsored murder.

Famous death penalty abolitionist and Holocuast survivor Elie Wiesel knew this very well when he said of capital punishment: “Death is not the answer.” Weisel also said this: “With every cell of my being and with every fiber of my memory I oppose the death penalty in all forms. I do not believe any civilized society should be at the service of death. I don’t think it’s human to become an agent of the angel of death.” Like Elie Wiesel, Jewish theologian Martin Buber joined prominent leaders such as Hugo Bergmann, Pearl S. Buck, Ernst Simon and countless others who held this line against state-sponsored murder in ALL cases, including opposing Israel’s execution of Nazi mass murderer Adolf Eichmann.

As for me, my own learning about Wiesel, Buber and this Nazi legacy of lethal injection ultimately converted me from a death penalty proponent to a hardened Jewish abolitionist. This transition occurred alongside my own personal journey as a Jewish prison chaplain who witnessed the capacity of individuals to change.

And how about you? Now that you know this history, where do you stand on the use of lethal injection? Do you echo individuals like Kanye West (“Ye”), who praises Hitler for his legacies? Or, instead, are you on our side as we loudly chant…