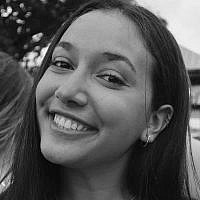 The Blogs
Cori Shalit
Apply for a Blog
Please note that the posts on The Blogs are contributed by third parties. The opinions, facts and any media content in them are presented solely by the authors, and neither The Times of Israel nor its partners assume any responsibility for them. Please contact us in case of abuse. In case of abuse,
Report this post.

This week, an article in my school newspaper accused my university’s Jewish population of excluding non-Ashkenazi students and leaving “JOC [Jews of Color] on campus on the outskirts of these spaces” without elevating any actual non-Ashkenazi voices. Rather than interviewing non-Ashkenazi Jewish students and emphasizing the need to uplift and amplify our voices and stories, the author appalled me with his choice to speak for us.

True allyship is the amplification of marginalized voices, not speaking over them with feigned understanding of their experiences and personal frustrations. Defining allyship is a persistent theme in our country’s current social justice movements with an emphasis on shining a spotlight on underrepresented voices rather than the white ‘heroes’ who speak up for them.

There are few non-Ashkenazi Jews on campus, just as there are few non-Ashkenazi Jews in the United States- Ashkanazi Jews make up about 90-95% of American Jewry- and the repercussions of this demographic truth have been summed up by the term Ashkenormativity. Ashkenormativity is the conflation of Judaism with Ashkenazi culture and centering the Ashkenazi experience as the prototypical Jewish experience, thereby overlooking Jews who are not Ashkenazi. This means that non-Jews view the entirety of the Jewish population as white-functioning Ashkenazis, and all of the stereotypes that come with that identity are pushed onto the rest of us.

Regardless of our small numbers, we do have our own thoughts and opinions on this phenomenon. In some spaces, we do feel overlooked. For example, it would be great to see Tulane’s Jewish Studies department offering courses that explored Mizrachi or Ethiopian Jewish heritage in addition to Ashkenazi and Sephardic so other students and I could learn more about other prevalent diasporas. I’d also like to see a default Jewish food that is not consistently Ashkenazi. My family spent most of its time in the diaspora living in Yemen, enjoying music, food, and rich traditions that would be as foreign to an Ashkenazi Jew as gefilte fish is to me.

But unlike what we have to say, the author of this article, however, chose to use the guise of ‘Ashkenormativity’ to discuss his own opinions and intentionally chose not to discuss our own actionable concerns about the impacts of Ashkenormativity on our daily lives.

Not only did the author attempt to ‘shed light’ with the intention of ‘helping’ people like me, but he also placed blame on the Jewish community that I feel a part of and that has welcomed me, without offering any viable solutions. I’ve personally worked with Hillel to include more Mizrachi food options at holidays like Break Fast for Yom Kippur and spoken to professors in the Jewish Studies department to include more classes that incorporate non-Ashkenazi history. I’ve attended both Chabad and Hillel events that have incorporated Israeli foods that encompass Mizrachi cuisines. This year, Hillel’s new Israel Fellow is a Mizrachi woman who is also working to implement these changes. Actions like these that take steps to create change are what need to be highlighted and shared in order to foster a more productive and inclusive future at not just within the Jewish community at my university, but in every Jewish space in the United States.

The morning after I read the article, I walked into class to hear the article being complimented by an Ashkenazi Jewish professor. When I raised my hand and began to explain my qualms with the article and highlight the fact that this article does not speak for me, the professor chose to immediately shut down my voice and start the day’s lesson. As the only non-Ashkenazi Jew in the room, my voice was silenced yet again while one Ashkenazi Jew praised a fellow Ashkenazi Jew for bringing this topic to his attention. Ashkenormativity prevailed.

I care about dismantling Ashkenormativity in Jewish spaces, but I don’t need ‘Ashkenazi saviors’ to hop on the bandwagon if they are not willing to truly listen, productively raise awareness, and are only interested in attacking and dividing Tulane’s Jewish community.

About the Author
I am a student currently attending Tulane University majoring in Jewish Studies and Economics. I hold a strong passion for learning about Jewish history, and the State of Israel.
Related Topics
Related Posts
Comments