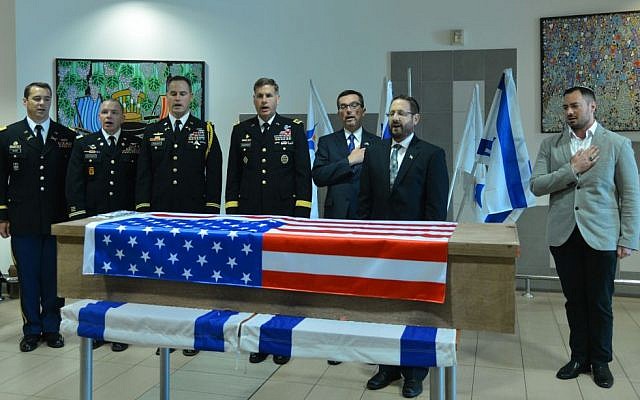 Israeli and American officials participate in a goodbye ceremony for Taylor Force, the US citizen killed in a stabbing terror attack in Jaffa, as his body is sent back to be buried in the United States, at Ben Gurion Airport near Tel Aviv, on March 11, 2016. (Flash90)

Before those who believe payments from the Palestinian Authority to terrorists and their families will be cut off because of the Taylor Force Act dance in the streets, let’s look at what has transpired.

The Taylor Force Act started out as a powerful and long-overdue tool for pressuring the Palestinian Authority (PA) to stop paying terrorists. But the legislation has been diluted, weakened and compromised in so many ways that it is now a pale shadow of its former self. The Taylor Force Act has been gutted.

Known in the Senate as S. 1697, the Taylor Force Act is named after a young Vanderbilt University student — and US Army veteran — who was murdered by a Palestinian Arab knife-wielding terrorist in Jaffa in 2016. The lead Senate sponsor is Senator Lindsey Graham (R-S.C.); Rep. Doug Lamborn (R-Colo.) initiated the House of Representatives version, H.R. 1164.

The idea behind the bill was to reduce US aid to the Palestinians in proportion to the amount that the PA pays to terrorists.

Thanks to the good work of Israeli Brig. Gen. (res.) Yossi Kuperwasser and the Jerusalem Center for Public Affairs, we know that the PA has a precise and sophisticated system of providing financial incentives to the murderers of Jews.

The financial rewards don’t stop there. After he completes his sentence, a terrorist receives a minimum additional grant of $1,500. The size of the grant increases according to the length of his sentence. A murderer receives $25,000.

Their families are rewarded, too. The family of an unmarried terrorist who is killed receives $100 monthly. The widow of a terrorist receives $250 each month, for life.

Stopping such payments is obviously a necessity. And the US has the leverage to stop them: the hundreds of millions of dollars that America provides to the Palestinians each year. The original Taylor Force Act would have linked the two. But as the bill began working its way through the legislative process in recent months, the appeasers jumped in.

There are officials in the State Department and certain congressional offices who are deeply pro-Palestinian. They started pushing for all sorts of exceptions and loopholes. Unfortunately, some congressional staffers and Jewish leaders who support the bill got weak in the knees. They decided to accept compromises in order to get more votes for the bill.

So, they added language saying that US funding for various Palestinian health and sanitation programs would not be affected. Senator Bob Corker (R-Tenn.), chairman of the Senate Foreign Relations Committee, warned that such exemptions would “basically gut the bill” and render the legislation “useless” — because they would leave too few areas of funding for the US to exercise leverage. He was right.

And it got worse. Next, a one-year delay before the provisions of the bill go into effect was added. That gives the PA a year in which to come up with a phony new arrangement by which the payments are given to terrorists from some “private” group instead of the PA itself.

Then the bill was changed to stipulate that the money that is withheld must be put into a “Palestinian Authority Accountability Fund,” which can then be given to the Palestinians if the State Department certifies that the PA is taking steps against terrorism.

We all know that for the past 24 years, the State Department has repeatedly “certified” that the PA was keeping its obligations under the Oslo Accords — even though that certification was a total lie. No matter how blatantly the PA violated the accords, various administrations always found some excuse to declare it to be “in compliance,” so that US money would keep flowing. There is every reason to believe that the State Department will do so again.

Sometimes, in politics, you have to compromise. I get that, and have done it myself when advancing other terror victim legislation. Sometimes a flawed bill is better than no bill at all. But not always. Sometimes a bill is so deeply flawed that it is actually worse than no bill — because it will prevent any other action from being taken on the issue. This is one such bill.

If the Taylor Force Act passes in its current form, there will be no further congressional action on the issue for the foreseeable future. And we will be stuck with legislation that pretends to address the issue of paying terrorists, but really does nothing of the sort. That would deal a grievous blow to the memory of Taylor Force and the many other American victims of Palestinian terrorism.

A version of this post first appeared at jns.org.

About the Author
Stephen M. Flatow is the father of Alisa Flatow who was murdered by Iranian sponsored Palestinian terrorists in April 1995 and the author of "A Father's Story: My Fight For Justice Against Iranian Terror" available from Devon Square Press and on Kindle. He is an oleh chadash.
Related Topics
Related Posts
Stephen M. Flatow
Comments