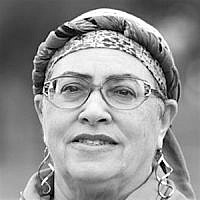 The Blogs
Malka Ben-Ravi
Apply for a Blog
Please note that the posts on The Blogs are contributed by third parties. The opinions, facts and any media content in them are presented solely by the authors, and neither The Times of Israel nor its partners assume any responsibility for them. Please contact us in case of abuse. In case of abuse,
Report this post.

WHY IS A DONOR HUMAN MILK BANK IN ISRAEL ESSENTIAL?

A donor human milk bank in Israel will save many babies lives and reduce medical costs for Israel. Why don’t we have one in Israel? Our national security is at risk.

In 2008, the World Health Organization called for World Health Assembly member nations to promote the safe use of donor milk delivered through human milk banking for vulnerable babies.

Hospitals should have donor human milk stations for milk collection from prescreened and registered volunteers. The prescreening with blood testing and medical history can be done at the hospital and the multi-user breast milk pumps should be provided to safely and efficiently collect the milk, pasteurize it, store it, and provide it to the Neonatal Intensive Care Unit for use. This method will be the most cost-effective and safest way to get human milk to high risk babies. All visitors to the hospital should be encouraged to donate milk, just like a blood bank.

In Israel, each year more than 12,000 premature  babies are born with approximately 1600 weighing less than 1.5kg. The Health Ministry issued extensive guidelines in 2016 toward establishing a human milk bank. The guidelines emphasize that the construction cost of a human milk bank is significantly lower than the cost of direct treatment for symptoms or medical complications due to lack of breast milk nutrition. The Health Ministry stresses that a human milk bank will primarily be designed for small premature infants, babies with birth defects or deficiencies in the digestive tract and other health problems. A second priority will be given to larger premature infants, orphaned babies, adopted babies, and every baby whose mother’s milk is not available.

A report was jointly published by the Israeli Neonatology Association, the Association for Premature Babies in Israel, and the Israel Forum for Premature Babies. According to the report, the mortality rate of premature babies weighing less than 1.5kg is significantly higher in Israel, compared to developed countries where human milk banks exist (over 500) and premature babies are solely fed breast milk. The World Health Organization recommends exclusive breastfeeding for babies until the age of six months and supplementing with food after 6 months up until the first year of life.

The health benefits to women donating their milk are: reduced risk of breast cancer, obesity and diabetes, and reduced medical costs for treating these diseases.

If you support this worthy cause, go to: www.tipatzahav.com to learn more and get involved in establishing the Donor Human Milk Bank in Israel.

About the Author
Malka Ben-Ravi has been a Registered Dietitian and Lactation Counselor in the United States for over 25 years. She made Aliyah with her family in 2015 and began working as a Certified Breastfeeding Specialist to help new mothers enjoy breastfeeding their babies. Her goal is to establish a human milk bank in Israel to help save the lives of premature babies.
Related Topics
Related Posts
Comments