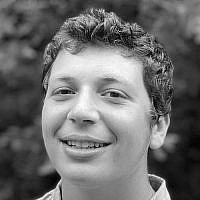 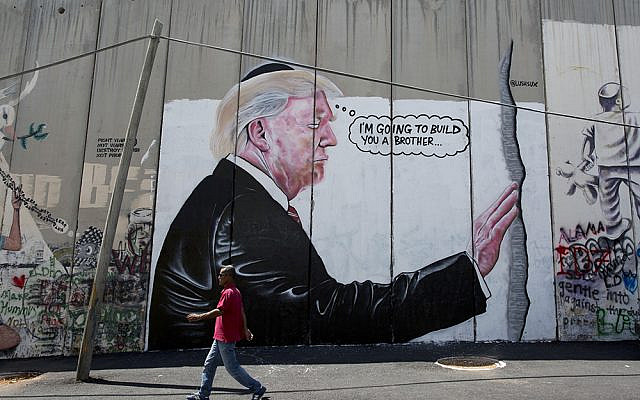 A wall for Palestine and a wall for Mexico, are they the same?

A Jewish high school senior sits in front of a scholarship committee, designed to see if he qualifies as someone with the intellect and sophistication necessary for the scholarship. They talk to him about politics, arts, culture… trying to get an idea of who he is. The committee asks him his opinion on the Trump administration’s plan to build a wall on the southern border with Mexico, he calls it ineffective; to him, the negative effects of the wall outweigh the positive ones. One member of the committee pauses, then asks:

“You mentioned that you are a supporter of Israel, why is it ok for Israel to build a wall and not the United States?”

The student did not receive the scholarship.

This true story, while surprising, is not an outlier. I have come to see that there is a growing idea in the United States that there are direct parallels between the wall following the green line of the West Bank and the in-progress wall on the border with Mexico. Often it comes from both political camps with one idea being the problematic stance on the right that “walls are good cause they keep out the undesirables” or the false equivalency on the left that “walls separate people and are the landmarks of oppression”. The question arises: do these ideas lend any credibility?

The Wall in the United States

I want to start by saying that from my point of view, a wall on the southern border of the United States is not only entirely unnecessary but also is a money hole that wastes US tax dollars and can have untold ecological effects on the region. The purpose here, however, is not to explain my opinions on the wall but what the idea of a wall is born out of. A huge part of understanding the difference between a wall for Mexico and a wall for Palestine is revealing why people want it in the first place. Aside from the fact that many of these claims lack statistical validity, Americans in support of the wall feel that it will prevent illegal immigrants from entering the united states and stealing jobs while also stopping crime and drug trafficking. The key ingredient here is fear. What crosses the border here, however, is people trying to make a living for themselves and their families. In a sense, an illegal immigrant is one of the most American concepts: people doing whatever it is they can to try and make a better life from themselves and their loved ones. The only difference is that in 1880 when my great grandparents crossed the Atlantic, they were able to get a visa. The illegal immigrant is as American as it gets, just without the paperwork. It seems that a wall stands to affirm the arbitrary division of what makes someone American or not. I’d also add that illegal immigration is an incredibly Israeli concept with the millions who made illegally made aliyah to British Mandatory Palestine after the war with the help of the Haganah in spite of the White Papers that forbade their immigration.

The Wall in Israel

During and following the Second Intifada, walls and checkpoints began to be built in and around the West Bank. These walls were incredibly destructive, closing people off from one another and often cutting through important places such as farms, orchards, schoolyards, and property. The walls were also constructed in places to preserve Jewish settlements, to the detriment of Palestinians. All Israelis know this, and yet the wall has support because incidents of terror have plummeted as a result of it (from 73 attacks in 2002 to just 9 in 2008). The wall saves lives while ruining others. The key ingredient is fear. This wall, unlike the one in Mexico, has millions of people that pass through its checkpoints every day, degrading them with harassment and causing an enormous burden on their lives.

These walls in Contrast

The point I am trying to make here is that both walls are born out of fear, but one type of fear is based in fact and another in speculation. Additionally, the nature of what these walls stop is entirely different, and in my mind, I find it much easier to justify the negative effects of a wall if it means lives are saved rather than the economy. On the other hand, in both cases, the wall radicalizes; it’s seen time and time again in the course of human history that casual oppression sows the seeds of violence. The important idea here is that each wall is a temporary solution to a long term problem, a band-aid haphazardly placed on a gushing wound. When we make policy based on our fears, we fail to address the larger issues at hand and the roots of the problems, without doing so we are doomed to exist in a constant cycle of fear, oppression, and retaliation. It is vastly more complicated than “wall good” or “wall bad;” it’s the people, lives, and stories that fuel their existence or lack thereof.

As it turns out I myself an experiencing an immigration problem of sorts. The Israeli Health Ministry is denying me an entry permit to join my gap year program that left without me and has been going on for the past two weeks. I recently recovered from the coronavirus and have unable to get a negative test because the coronavirus test registers people as positive for up to months after they are no longer contagious. Stuck in this bureaucratic nightmare my only hope might be someone with the proper connections reaching out to the Ministry of Health and trying to get me an exemption. Please fill out the contact form on my blogger profile if you have any information that might be helpful.