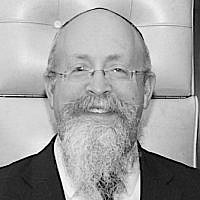 The Blogs
Mendel Lew
Apply for a Blog
Please note that the posts on The Blogs are contributed by third parties. The opinions, facts and any media content in them are presented solely by the authors, and neither The Times of Israel nor its partners assume any responsibility for them. Please contact us in case of abuse. In case of abuse,
Report this post.

I had the distinct privilege and honour to officiate at Gena’s funeral. There were hundreds of people present. I couldn’t see how many, but it was immense. I was conducting a funeral prior to hers and when I returned to the hall there was a huge crowd waiting – and that was 45 minutes before Gena’s funeral had even begun! The crowds continued to stream in afterwards too.

The overriding emotion was that we were in the presence of true greatness. The words ‘good and great’ get bandied around a lot, but in Gena’s case it was completely true – and then some. She was a woman who had seen the worst evil ever witnessed by mankind. But she did not succumb to it. She stared at the monster and prevailed.

From that point on, rather than moan and complain, rather than hate, rather than play the role of persecuted victim – all of which would have been completely understandable – she made it her life’s mission to preach tolerance and respect between people. She worked tirelessly into her 90’s to campaign for respect, love and appreciation for others. And all done with her trademark smile and immense warmth.

She was also an extraordinary mother, grandmother and great-grandmother. A true matriarch of her family, whose descendants have continued her powerful legacy and who are continuing to have a strong impact on the Jewish scene and beyond. She was an amazing woman. An unforgettable soul. A Jewish – and national – icon and treasure.