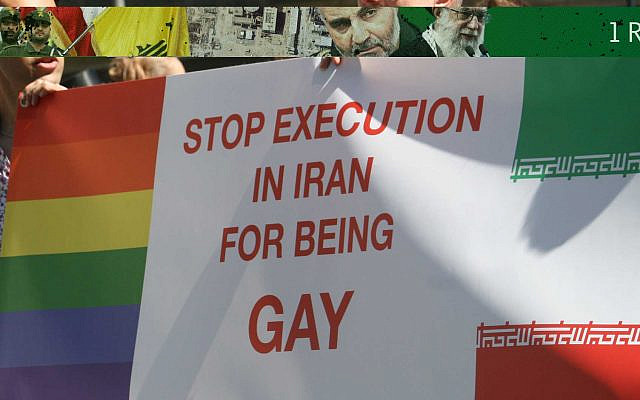 As an Iranian American journalist, I am in regular contact with an array of Iranian opposition students and young democracy activist in Iran via social media. Perhaps the single largest group of young Iranian activists that contact me hail from the country’s LGBT community with questions about Israel and LGBT rights in Israel. Recently I received a number of curious correspondences from several gay activists in Tehran who asked why the openly gay Democratic presidential candidate Pete Buttigieg has failed to acknowledge the intense persecution they face at the hands of the Iranian regime today? These gay activists in Iran have asked me why Buttigieg endorses giving the Iranian regime another “deal” or an economic lifeline to continue its reign of terror when the regime has arrested, tortured and executed thousands of gays and lesbians for the last four decades?

These were questions I could not answer for these gay activists living in fear for their lives in Iran. But perhaps it’s time for Buttigieg and other LGBT Americans today to learn what this evil Iranian regime is doing to gays and lesbians in that country. Instead of blindly seeking to appease this evil Iranian regime that has destroyed the lives of homosexuals in Iran for decades, LGBT and other Progressives in America who claim to support human rights must wake up and finally speak out against the crimes of the Ayatollahs in Iran.

Perhaps the most disturbing aspect of the Iranian regime’s four-decade campaign against gays and lesbians in Iran comes from the regime’s official laws. The regime follows Sharia law or Islamic law that strictly prohibits any type of sexual activity outside the realm of heterosexual marriage and homosexuality is considered “a violation of the supreme will of God.” In Islamic law homosexuality is referred to as “lavat,” which is Arabic for sodomy and in Iran is punishable only by death. For example, Article 109 of the regime’s Penal Code states that “in the case of sodomy, both the person carrying out the act and the person that the act is being done onto are guilt and must be punished by death.” Article 110 of the regime’s Penal Code states that the “punishment for the crime of sodomy is killing and that the judge must decide on how those found guilty must be executed.” Article 134 of the regime’s Penal Code states that women who unrelated and are kissing or even standing naked under one roof shall be punished with 100 lashes!

On a regular basis, local police or regime-sanctioned thugs in Iran arrest, beat, torture and, in most cases, hang or even stone individuals who are suspected or found to be involved in homosexual activity. The on-going executions of gays and lesbians in Iran are a mere footnote in the 41-year horrific history of unspeakable human rights abuse and killings carried out by Iran’s current regime against LGBT people living in that country. According to a May 2008 confidential British government cable that was leaked by the “Wikileaks” website and later published by the London Telegraph newspaper, human rights activists believe that since 1979, between 4,000 and 6,000 gay men and lesbians have been executed in Iran for crimes related to their sexual orientation.

The following are just some of the recent incidents of LGBT facing human rights abuses by the Iranian regime:

In 2011, three handcuffed gay men from the southwestern Iranian province of Khuzestan were led to the gallows in the middle of the city of Ahvaz before a crowd of several hundred people and summarily hung by officials of Iran’s regime. Several months earlier, the three men had been found guilty of sodomy after a sham trial.

In September 2007 when speaking to a crowd of students at New York’s Columbia University, Iran’s former President Mahmoud Ahmadinejad flatly denied the existence of homosexuality in Iran. Ironically, that same year the Iranian regime executed more than 200 people — many of whom were LGBT.

In July 2005, two teenage boys, Mahmoud Asgari and Ayaz Marhoni were accused of the crime of sodomy and hung in public by construction cranes in the Iranian city of Mashad.

Frank Nikbakht, who heads the Los Angeles-based Committee for Minority Rights in Iran recently described a chilling televised speech given by one of Iran’s radical fundamentalist clerics nearly 40 years ago regarding the joys of killing homosexuals. “In July 1982, the infamous judge of the revolutionary court, Ayatollah Gillani, in his weekly program on Iranian TV, graphically and with a smile on his face described the offenses punishable by gruesome executions —  he even ordered the execution of his own gay son, specifically announcing sodomy as a crime that was punishable by death, as the law of the land,” said Nikbakht.

These very difficult circumstances for LGBT Iranians make life unbearable for the majority of them. Often times gay couples in Iran are not seen together in public and often keep their sexuality behind closed doors since they have been popularly stereotyped as being sex-obsessed child molesters or rapists having AIDS or other sexually-transmitted diseases.  The only way for gay men to be able to live in society here in Iran is to live as transsexuals. Many gay men wear make-up and cover themselves under the women’s veils in public because they are afraid of abuse from others or the police.

Sadly, today in Iran the regime pressures gay men to have gender-reassignment surgery in order for them “to be cured of the homosexuality disorder” and to “prevent social disorder that is brought about by same-sex relationships.” Many times not only are gay men forced to have the operations, but also the regime subsidizes the costs of the surgeries and legalizes new birth certificates for those who undergo the operations according to a 1987 fatwa or Islamic religious edict issued by the Iranian regime’s late founder, the Ayatollah Khomeini.  Seeking to avoid legal difficulties and heavy societal pressures, countless gay men in Iran in recent years have instead voluntarily opted to have their genders changed. According to a February 2008 BBC News report, as a result today Iran has one of highest rates of these surgeries, second only to Thailand. Yet at the same time many who do undergo these surgeries still face abuse from the regime and are ostracized by their communities.

Still, many LGBT Iranians who I have been in contact with in recent years have expressed a significant sense of hopelessness with their plight. They often make remarks that the LGBT community in the U.S. and Europe has not taken any monumental steps to help them or
indirectly pressure Iran’s regime of their behalf.

While I do not hail from the LGBT community, the dire situation for LGBT and others living in  Iran who are only seeking personal freedoms, in my estimation, is a serious humanitarian crisis that we living in the free world can no longer ignore. Those individuals in America or Europe who claim to be Progressives who support LGBT rights, need to speak up and openly oppose this Iranian regime that has devastated the lives of millions of LBGT in Iran. With the Iranian regime’s sick and twisted ideologies against LGBT and others they deem as “undesirables,” one cannot help but wonder how that regime, if unchallenged, plans to force their beliefs on the rest of the world as they continue to pursue nuclear military capability, and defy the international community on societal and legal issues alike.