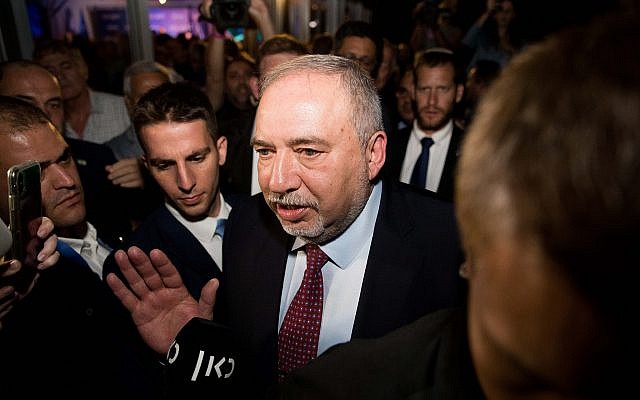 In the aftermath of the Israel’s election I am sure there would be a consensus among  Jewish News readers on two aspects.

First, that Israel’s  P.R. . voting  system–  invariably leading to nauseating  post-election “horse-trading”, periods of political paralysis and fragile coalitions- is woefully unfit for purpose.  Secondly, that Israel’s ability to survive as a  vibrant  democracy in the Middle East ,  surrounded   by  hostile  regimes where open elections are virtually unheard of and societal divisions are “settled” by brutal  dictators and   barbaric civil wars, is truly remarkable. Beyond those points, consensus would probably  end.

For my part, the saddest  aspect of both  Israel’s elections this year has been the huge element of inter – Jewish invective that has dominated the campaigns, waged by viciously anti- religious groups against the Torah-observant  population. The  instigator of this scourge  has undoubtedly been Avigdor Lieberman , with  his Yisrael Beitenu party. Far from being a “kingmaker”  as he is  being dubbed, he is a “king trouble- maker”.

Although Lieberman is  uncompromising towards the Arabs  on foreign policy (which to me is his only redeeming feature) , his domestic agenda is almost entirely focused on opposing religion.   In terms of policy this means forcing all yeshiva students into the army, secularising the education system,  undermining public Shabbat observance , and removing rabbinical control over vital matters of status, such as marriage and conversion.

Unfortunately , apart from his obvious  appeal to ex–Russians, Lieberman has gained further support from younger disaffected citizens who seek a role model  who is  radical and defiant – a position previously held by Yair Lapid and his now-absorbed Yesh Atid party. Hence, Yisrael Beitenu’s astonishing  increase to  eight Knesset  seats. Lieberman  has also contaminated the opinions of otherwise responsible politicians  within the Blue and White party who have done little to disassociate themselves from his blasphemous outpourings.

What of the current stalemate? Clearly   Likud cannot form a majority Government with its natural rightist allies alone – namely UTC, Shas and Yamina.  Blue and White similarly  cannot do so  with its natural leftist allies – namely  Labour- Gesher, Democratic Union  and (yes, I would so categorise them for these purposes)  Yisrael  Beitenu. Both blocs would fall well short of the 61 seats needed. The reality  is that neither Netanyahu nor Gantz has won this election. But it  is inappropriate for the media to keep depicting  Netanyahu  as the sole loser .  He has been a great leader and there is every reason he should stay around.

The only party   excluded from those   mentioned above is  the 13 –strong  Arab   “Joint List”. For the idea of including in the  Government a motley group of  politicians who support  Palestinian terrorists and basically  seek the destruction of the State  is surely anathema to any intelligent  Israeli with even the most tenuous attachment to Judaism or Zionism. They are the Trojan Horse in the Knesset.

My message to President Rivlin is this.   There seems  no alternative but to broker a coalition  between Likud and Blue and White, even if it requires a process of “banging  heads together”. Let those parties  have  a consecutive Prime Ministerial  power-sharing agreement between their leaders.  Such an arrangement was  relatively successful  between  Peres and  Shamir in the 1980’s, and  could work well now. In truth there is not such a political gulf between Netanyahu and Gantz as individuals.

But the  Government  must  not end there.  The strictly orthodox  parties  play a key role in  underpinning the profile  of Judaism – an essential ingredient for Israel’s survival.  They too must  be brought into the coalition.  If Yamina  were also  included  it would bring the  Government’s total Knesset strength to almost 90 – a heathy majority.  As for the remaining ragbag  of left-wing  appeasers,  revolutionaries and the party of Lieberman , (whose personal obstinacy and bigotry was the main cause of all  this upheaval) let them stew  as an unholy alliance  in opposition , where they can effect  the lease damage.