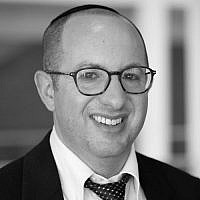 The Blogs
Zvika Klein
Apply for a Blog
Please note that the posts on The Blogs are contributed by third parties. The opinions, facts and any media content in them are presented solely by the authors, and neither The Times of Israel nor its partners assume any responsibility for them. Please contact us in case of abuse. In case of abuse,
Report this post.

NEW YORK — As a journalist covering American Jewry, the largest Jewish community outside of Israel, for more than a decade, I am exposed to quite a few research papers and essays about the younger generation there. It turns out it is not only drifting apart from Israel, it is also acting to turn public opinion around the world against it. In 2014, for instance, a new organization was created to challenge the organized Jewish-American community – IfNotNow. The group’s activists, who call to end “Israel’s military rule over Palestinians in the West Bank, East Jerusalem, and Gaza,” organize demonstrations against American politicians and Jewish institutions and blame them for supporting the occupation.

Such opinions are becoming more popular. A recent survey found 22 percent of young Jews think Israel is ethnically cleansing the Palestinians; 25% agree with the saying ‘Israel is an Apartheid State.’ Also among those who oppose these statements, many don’t view them as antisemitic.

Among those fighting these trends is Liel Leibovitz, a senior editor at Tablet – a conservative, Jewish magazine. During the most recent conflict with Gaza, Leibovitz wrote that this round was different, because “once and for all, it opened up a chasm that many of us have spent our lifetimes trying to avoid. Simply put, there are only two sides now: the Zionists and the anti-Zionists. Given the events of this past week, it is incumbent upon every person who wants to have any effect on the future, Jew and non-Jew alike, to understand how and why this is—and to pick a side, and soon.”

“There are only two camps that will have any political significance in the coming decade. In the first are the people willing to call themselves Zionists—without clarification or caveat or distinction,” Leibovitz added, calling the violent anti-Jewish attacks in Los Angeles that occurred at this time period “pogroms,” and explained their purpose was to attack Jews as revenge for Israel’s actions.

“Today’s progressive ideology is religiously-fanatic, oppressive and total,” Leibovitz tells me. “The moment you open the door for them and adopt their terminology – you’re done for. It is a new religion which is morally opposed to Judaism. There isn’t a single Jewish institution that hasn’t dealt with the progressive threat.”

I meet with Leibovitz in his Upper West Side apartment, which is a good indicator of his unusual character. The home is filled with endless shelves filled with an infinite number of books, and in the middle is a two-shelved cart with alcoholic beverages. “We’re a home with some people who keep Kosher – that’s me – and some who don’t,” he says as he directs me to the bottles that meet the Jewish-religious criteria.

He’s 45 years old, married to author Lisa Ann Sandell, and a father of two. He immigrated to the US twenty years ago but still doesn’t have American citizenship. Originally he’s from Tel Aviv, son of Roni Leibovitz, known in Israel as the ‘Ofno-Bank,’ who robbed 21 banks over the course of 1989-1990. Liel graduated high school and served in the IDF’s Spokesperson unit while his father completed his prison sentence. In recent years, alongside his writing for Tablet, he is a co-host of the most popular Jewish podcast in the US, and maybe the world: UnOrthodox.

Alongside his career as a journalist, Leibovitz embarked on an academic career and was given tenure at NYU. That’s when he made his big mistake and asked to join a forum of university faculty who met on a regular basis to discuss the Israeli-Palestinian conflict. Leibovitz thought they would be interested in hearing him, a non-observant Jew who grew up in Israel, voted for the left-wing Meretz party and defines himself as a Zionist. To his surprise, he was told his views were “outside the legitimate boundaries” of the conversation, and he would not be able to participate in the conversation. Leibovitz decided to fight back, a decision that resulted in NYU canceling his tenure. Since then, he underwent what he calls a “process of sobering up” which included shifting to the positions of the Israeli and American Right, as well as taking upon himself more religious aspects of Jewish life.

“I’ve made my choice – reluctantly and mournfully at first, but I’m starting to feel some measure of hope and excitement,” he wrote in the essay, which is titled “Us and Them.” Leibovitz’s essay made waves in the American Jewish community, as it asked what is happening to Jewish life in the US. “In liberal and non-Orthodox circles, individuals and institutions that devote most of their emotional and spiritual energies to checking off the rapidly shifting boxes erected by the left are going to find themselves with a version of Judaism mostly disconnected from religious observance, and which will therefore attract only the people in the market for progressive activism, with a little bit of cholent thrown in for nostalgia’s sake,” he writes

“[T]his is a tiny minority,” he adds. “So while this strategy may be the key to success for some institutions, it will be short-lived: No one wants to schlep to shul to be lectured to endlessly about white supremacy or gender spectrums. Why? Simple: because you can get better versions of it elsewhere. People who sought out those spaces for meaning and community and spiritual inspiration will just start to stay away, as studies suggest they already are.”

Among US Jewish progressives, it’s harder and harder to live a Jewish life, especially as a Zionist, Leibovitz tells me. “The moment a large minority says it is unwilling to see an Israeli flag in any place in the community building because Israel is an apartheid state, I say – we have nothing left to talk about.” His emotions show as he explains: “It’s ‘Us’ and ‘Them,’ and it’s time to choose. Are you with us or against us?”

What do the ‘Them’ Jews hear in synagogue? What is the dominant discourse there?

“Rabbinical students come to them and give a sermon about ‘Black Lives Matter’ and ‘Tikkun Olam.’ The people sitting in the audience – some of them smart and wise – say to themselves that it sounds good. Tolerant. Progressive. ‘Let’s adopt it,’ they think. At that moment an entity competing with Judaism is formed, one different than original Judaism and hostile towards it – and then the inner-communal fighting start.”

Why do their progressive views and concern for minorities go hand in hand with anti-Israel ideas?

“Israel scares the progressives because it is a country with basic ideas of community, family and faith. It is against their values,” Leibovitz says calmly. “This is why no matter what Israel society does, or how open and accepting it will be, the principle bothers them. To them, when Israel acknowledges and adopts LGBTQ rights it’s merely an act of ‘pinkwashing,’ aimed at hiding crimes against humanity. It’s absurd. To them, reality means nothing. You can’t even say ‘I don’t like Netanyahu’s policies, but as a Gay couple of men or women we can enjoy living in Israel without fear.’ Extremism doesn’t allow for other opinions to be heard.”

“Looking at American history you see that all the great fighters for human rights, like Abraham Lincoln and Martin Luther King, all were connected to the moral and conceptual ideas planted in the vision of the Israeli prophets” in the Bible, Leibovitz says. “You can’t understand King without understanding the passages he quotes from the Bible. Today, when you talk about ‘justice’ you’re not quoting the book of Isaiah. Moreover, to them alluding to the Bible is a terrible thing.”

Leibovitz is filled with optimism. His podcast episodes, he shares, have been downloaded more than 7 million times so far, and in his speaking tours with co-hosts he’s met Jews of all sorts. “Why has the podcast been so successful? Not because we’re smart or fun, but because Jews are seeking how to be together. They want a place to come to and just be Jewish. I don’t care if you keep Shabbat or not, or how you shave, just come sit with us. You’ll connect to us because we’re all brothers.”

In the past, Leibovitz belonged to the Romemu congregation, which belongs to the relatively small denomination of Jewish Renewal – and deals with mystical and spiritual aspects of Jewish tradition, including ecstatic prayer and meditation. The synagogue actually operated out of a church because its members couldn’t find another suitable location in the area. Today, he says, he no longer believes in the division of Judaism to denominations. “As far as I’m concerned,” he states, “there is only Jewish.”

What about those not looking to be together? Is American Jewry on the verge of splitting?

“We’ve already split. For those on the other side, the ‘Others,’ the benefit of your Jewish identity will lesson until it is no longer. Nathan Sharansky and Professor Gil Troy wrote an excellent piece for us in Tablet, titled The Un-Jews. They bring examples of Jews throughout history who believed in all sorts of additional agendas, such as those who supported Stalin as part of their Jewish identity. What happened to them? They’ve all disappeared from the map.”

What will happen to their look-alikes today?

“For the next five years they will continue to say ‘as a Jew I support Hamas,’ and then it will no longer interest anyone. The need for court Jews is short-lived. I will say this with careful optimism: in the short term life will be very hard for American Jews, but in the long term we’re talking about a new golden age.”

Why will it be hard for Jews?

“If you belong to the 60-70% of non-Orthodox Jews, all the synagogues you used to attend have collapsed in front of the progressive cult, as have all the universities. I think what will happen here will force people to live active Jewish lives. They will understand it is not enough to go to services on Friday night, hear the sermon by the rabbi at the end of the prayer, and then say ‘wow, that was an amazing sermon, now let’s drive home and eat dinner in front of Netflix.’ You need to create your own community life, to force yourself to understand what’s important, to connect to the sources. Many Jews on the progressive side feel their synagogue doesn’t provide relevant sources and doesn’t answer their needs. I see how such people start to study a text with a hevruta – study buddy – or go elsewhere for Kabbalat Shabbat. They feel the ground is shaking.”

“Understand: in my camp, in the ‘Us,’ there are connections we never thought were possible. At these meetings, I see ultra-Orthodox Jews with Reform ones, conservatives with liberals. They understand they are here in the US together, fighting a frightening wave which threatens their communities. I am very optimistic about those Jewish seeking an alternative, the question is what happens to the passive Jews.”

About the Author
Zvika Klein is an award-winning Journalist and commentator on Jewish world affairs for Makor Rishon newspaper. He served as a Jewish Diaspora advisor to Israel's President's Office. Zvika was born in Chicago IL, and lives with his wife and three children in Jerusalem.
Related Topics
Related Posts
Comments