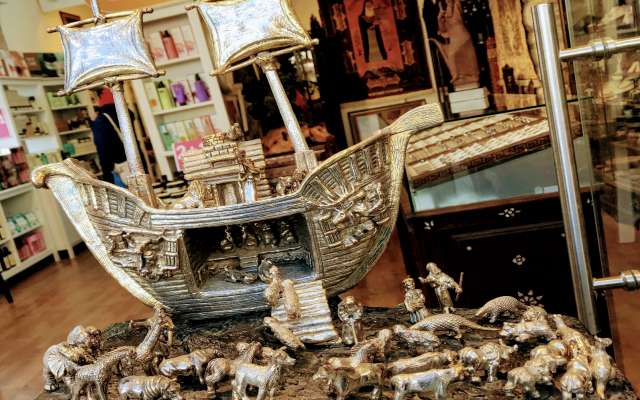 It’s funny that when we learn the Torah (Bible), we read all these stories about people, but do we ever really think what it was like to be them? For example, in today’s Torah portion of the week, Noah, we read how at the command of G-d, Noah built an ark to save humanity and two of every kind of animal from the flood that would wipe out the corrupt world at the time.

Today, at Aish HaTorah of Greater Washington, Rabbi Baruch Frankel discussed what must it have been like in the ark, with the flood waters raining down for 40 days and nights and living with all the animals inside. Aside from the destruction of the world outside, inside it was likely dark and smelly and difficult to live shut in for the better part of a year. Remember, despite how great our ancestors were (and “Noah was a righteous, wholehearted man in his generation”) still these are human beings with feelings!

Rabbi Frankel said that is why G-d commanded Noah to build a skylight in the ark (Genesis 6:16):

You shall make a window for the ark…

But the window provided perhaps a little light in a boat about half the size of a modern-day cruise ship, so why did they have it—what other purpose did it serve and what does it teach us about coping skills and survival for us:

Rabbi Frankel said that the window provided Noah and his family with perspective on their situation. They may have felt alone, in the dark, depressed from the destruction of everything and everyone they knew, but the window helped them see that whatever they were going through, others outside, who were dying in the flood, had it much worse. Moreover, Noah and his family had so much to be grateful for being in the protection of the ark. To this, Rabbi Frankel said a wise saying about having perspective on our challenges in life:

If the grass appears greener on the other side, then it is probably because the grass is fake.

No one has everything, and everyone has problems.  And like my dear father, Fred Blumenthal taught me never be jealous of anyone because:

So the window in the ark helped Noah and his family see what others were going through outside in order to give them context on their own lives and how lucky, truly, they were to be safe and alive!

I raised my hand and gave another answer: The skylight was like the proverbial “light at the end of the tunnel” with the window bringing in light and the ark being the dark tunnel. Thus, even in the darkest moments on the ark, with the world disappearing under the waters around them, there was still a light and hope at the end of even this great calamity for mankind. And like the Rebbe said: even in great darkness, if you light just one small candle, it can dispel the darkness! This window on the ark helped dispel the darkness for Noah and his family when things certainly were looking catastrophic.

To this another lady added: The skylight in the ark was a way to channel Noah and his family’s faith, where they could look up to and gaze at the heavens, to G-d Almighty, and remember from where salvation comes. It provided the window by which to strengthen their faith at a time when their faith may certainly have been tested by the great flood. As it says (Psalms 121:1-2):

I life up my eyes to the hills—where does my help come from? My help comes from the L-rd, the maker of heaven and earth.

And surely, at the end of the flood when the waters receded, it was exactly through this window that their faith was rewarded and deliverance came to Noah and everyone on the ark. Through this window, Noah sent out a raven and then a dove from the window to see if they would return or find dry land. Finally, the dove came back the second time with an olive leaf, and then Noah knew that the water had abated from the earth and that they would soon be able to leave the ark and begin to reconstitute life on earth.

Noah and all the fascinating people in the Bible weren’t just characters in a novel, but they were real people and they experienced up and downs, as we all do in life. The key to remember is that there is always a window where we can see our relative good fortune and everything we have to be grateful for, where we can keep an eye on the light at the end of tunnel (as my father used to say about bad things, “this too shall pass”), and we can look up to our Father in Heaven and remember that He will bring deliverance to us. Even in the mightiest of floods that devastated the world, G-d was still there for us, and He was, is, and always will be!