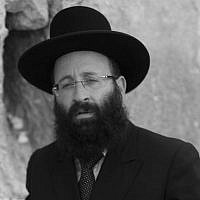 The Blogs
Shmuel Rabinowitz
Rabbi of Western Wall and Holy Sites of Israel
Apply for a Blog
Advertisement
Please note that the posts on The Blogs are contributed by third parties. The opinions, facts and any media content in them are presented solely by the authors, and neither The Times of Israel nor its partners assume any responsibility for them. Please contact us in case of abuse. In case of abuse,
Report this post.

In the Book of Kings, it says that Solomon made for the Temple “windows broad without, and narrow within.” Our sages explained that they were made this way because he did not need them for light. In every house, windows are meant to bring light in from the outside. But in the Temple, their role was the opposite. The windows of the Temple were not meant to bring light in, but to spread the light of the Temple to the world outside. “This is testimony for mankind,” says the midrash, “that the Divine Presence rests among Israel – That is the westernmost lamp.”

The Talmud teaches us, “The offerings remain in force as long as the Temple exists, but the lamps are forever.” Indeed, even today, almost two thousand years after the destruction of the Temple, its light continues to shine at the Western Wall. This is a light that attracts over ten million visitors per year, a light that spreads out to the entire world.

About the Author
Rabbi Shmuel Rabinowitz is the rabbi of the Western Wall and the Holy Sites of Israel, appointed to the position in 1995, by then-prime minister Yitzhak Rabin and the chief rabbis of Israel.
Related Topics
Related Posts
Shmuel Rabinowitz