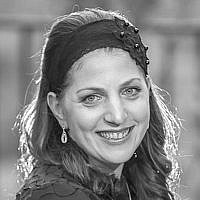 The Blogs
Rena Siev
Apply for a Blog
Advertisement
Please note that the posts on The Blogs are contributed by third parties. The opinions, facts and any media content in them are presented solely by the authors, and neither The Times of Israel nor its partners assume any responsibility for them. Please contact us in case of abuse. In case of abuse,
Report this post.

These days, the Hanukkah story echoes through kindergartens and classrooms around the Jewish world. And with good reason. We celebrate Hanukkah this week, and the dramatic story of the triumph of the ragtag Jewish fighters over the mighty Greek military machine is as compelling as ever.

As adults too, we tend to relate to the Hanukkah story in dramatic simplicity. Faith and courage conquer the forces of evil. The Greek bid to disrupt Jewish life and force us into submission is subverted. The Jews are saved, the Temple restored, Greek aggression vanquished, end of story. And, of course, the miracle of the flask of oil.

The story of Hanukkah though, like so many events in Jewish history, is really far more nuanced. The time period that immediately followed the rededication of the Temple and the miracle of the flask of oil was a rocky and difficult one for the Jewish people. The battles continued. The Greek threat had hardly been eliminated. Stunned by the audacity of the Jewish fighters, the Greeks regrouped and rearmed and led a massive campaign to squelch the rebellion. Jerusalem itself fell into Greek hands for a time, and Yehuda the Maccabee was actually killed in battle against the Greek army just a few years after the miracle of the Hanukkah story.

Living under the constant threat of the mighty and vengeful Greek army must have been terrifying for the Jews. This is hardly the smashing, winner-takes-all victory that we tend to associate with the story of Hanukkah.

To make matters more complicated, the Greeks maintained a presence in the land of Israel for a long time. Though the Jews had a great deal of autonomy, they were not a completely independent political entity. Though the Jews had religious freedom, the alien forces of Hellenism that the Maccabees had battled against made inroads into Jewish society, sadly even among leaders from the Hasmonean dynasty. Though the Temple functioned as the center of Jewish worship, it was in the shadow of Greek political dominance.

From this broader angle, the Hanukkah story is complicated and difficult. The victories in battle, sensational and thrilling, were short-lived. The miraculous light of the menorah, inspiring and astounding, did not usher in a new era of peace or yield supremacy over Hellenism.

Why then, do we celebrate Hanukkah? What are we in fact celebrating? The battles continued to rage! Hellenism had hardly been eliminated.

From the vantage point of today, thousands of years after the story, the question grows even stronger. The Temple is long destroyed. The Hasmonean political victories are no longer relevant. In what sense does all of this warrant an eight-day holiday?!

I believe that the answer to this question, and the ingenuity of the Hanukkah celebration, is precisely this paradox.

Hanukkah teaches us to recognize the hand of God in history, to celebrate the successes and appreciate the tremendous miracles that God performs for us, even when things are far from perfect. Even when the political and cultural context is laced with uncertainty. Even when you think that the story should have ended differently.

It is easy to point out what is missing. It takes courage to be able to appreciate the miracles in our world and celebrate the Divine hand in our lives.

In the midst of the battles of the Hanukkah story, this was exactly the point. Celebrating the re-inauguration of the Temple and the miracle of the flask of oil gave the people a tremendous amount of encouragement in their search to make sense of the events of the day. They were able to see the hand of God even as the battles raged on.

When we light the Hanukkah candles each year, we are making a very strong statement. The metaphor of light shining in the dark is as poignant now as it was then. Even in times of uncertainty, even when the cultural and political and religious contexts seem problematic, there are tremendous miracles that are happening each day.

It is easy to let them pass you by. It is incumbent upon us to recognize them.

About the Author
Rena Siev has been living in Israel since 2001. She works in education and translations.
Related Topics
Related Posts
Comments