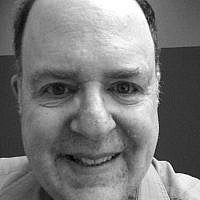 The Blogs
Daniel Feldman
Apply for a Blog
Advertisement
Please note that the posts on The Blogs are contributed by third parties. The opinions, facts and any media content in them are presented solely by the authors, and neither The Times of Israel nor its partners assume any responsibility for them. Please contact us in case of abuse. In case of abuse,
Report this post.

Living in a home with deaf parents in the 60s and 70s prior to the current myriad of technology for the deaf, posed some interesting challenges. My father was extremely handy and creative. He could fix almost anything. And, in truth, in some cases, the way he fixed some things may not always have been the safest or longest-lasting method, but, at least, in most cases, he fixed it. My father wired our large apartment with wiring attached to the phone line so that when the phone rang, a light bulb would flash on while it rang. He did the same with the doorbell. It was a wonderful invention! Now, he (and my brother and I) knew when the phone rang and when someone rang the bell.

I have to admit, that this knowledge wasn’t always to my “advantage”. They hadn’t invented answering machines, but they had invented annoying phone callers. At least without the flashing bulbs, I could have sometimes chosen not to answer the ringing phone and my parents wouldn’t have known the difference. But with the lights flashing, my father or mother would yell, “pick up the phone!” If I didn’t, I would have to lie about who called, and, as a kid, I wasn’t the greatest liar. The doorbell light was a bit easier to ignore. If the light flashed too often, one of my parents would probably open the door, anyway.

If you’re curious how my parents knew the difference between the phone and the doorbell, it was the pattern of the flash. The phone had a steady repetitive pattern – on for 3 seconds; off for 3 seconds. The doorbell was more random. A few times, my brother or I played a trick to fool my parents by ringing the doorbell in the same pattern as the phone. Yes, it’s not nice to make fun of deaf parents. I never professed to be a perfectly behaved kid!

Eventually, all those flashing lights became annoying. If I didn’t want to answer the phone (after all, I knew if an annoying telemarketer or my annoying friend was calling; my parents didn’t), or the door, I’d ignore it. Eventually, I learned to sleep without the flash bothering me. (My father may have gone a bit overboard with those bulbs, putting one in my bedroom.) My wife now gets annoyed that I never answer a ringing phone. I explain to her that I have been ignoring phones since I was a kid. The big difference is that now we have answering machines and email. Indeed, life is wonderful!

My mom spent hours in the bathroom in the morning. I only knew when she was showering, but, otherwise, I have no clue what she did in there for so long. It was painful for me when I had to go to school. I couldn’t pee in the morning, and I had to hold everything in until I got to school. (I told my urologist this story, recently. He was surprised that my bladder and surrounding muscles weren’t damaged. I told him that as a kid, I worked out daily!) Now that I ponder this, perhaps, my mom was getting back at me and ignoring me because I ignored answering the phone?

When either of my parents wanted tea or coffee (I despise instant coffee, but Joe DiMaggio hadn’t yet invented “Mr. Coffee”) they filled a tea kettle with water and put the rusted kettle on the gas flame – turned up high. Then, mom or dad left the room and forgot about the blasted thing! Five minutes later the kettle shrieked. If I happened to be free or walked by the kitchen, I turned off the gas. If I was too busy with something else, I let the kettle scream.

One of my friends came to my home when the kettle screeched. I ignored it and it was screeching for almost 10 minutes. My friend thought I was weird (well, I was, and still am!) “Aren’t you going to shut off that annoying thing?” He asked. “Why?” I said. “My parents are deaf. They don’t hear it screaming. It doesn’t bother them. What’s the worst that can happen? Either my mom or dad will pass by the kitchen and see the steam coming out and turn it off, or the kettle will burn a bit and they’ll smell something burning before they get the message.”

The “famous” scientific question, “If a tree falls in the forest…” needs some refinement, I think. Perhaps, “If a tea kettle whistles in a kitchen and a deaf person passes by, will you ever get your cup of coffee?” Perhaps, there is some advantage to ignoring all the noise or, for that matter, not hearing the noise in the first place. We live in a noisy environment – both physical noise and the noise caused by the overload of information whistling by our eyes and our other senses. Who needs all that info? Have you watched a news program on the TV screen, recently? (I know – no one watches TV, now.) The reporter is in the middle of the screen. The left side has “pop up” notices and the bottom has that “crawling” info with the traffic and weather – in case you don’t want to wait for the weather gal to show you what an occluded front is. There is no way a typical human can process all that input at once.

Personally, I think everyone should just take one day each week where they just ignore all that noise, no matter what it is. I know that I do this each week on my Shabbat (Sabbath.) But, you need not have a Sabbath to do it. Try it once. Act as if nothing is there. If you’re not sure what no noise feels like, you can re-read this article a few times. Or, speak to a deaf person. Just don’t ignore him or her.