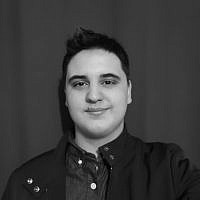 The Blogs
Keegan Nazzari
Apply for a Blog
Advertisement
Please note that the posts on The Blogs are contributed by third parties. The opinions, facts and any media content in them are presented solely by the authors, and neither The Times of Israel nor its partners assume any responsibility for them. Please contact us in case of abuse. In case of abuse,
Report this post.

This story was certainly not one that many expected. Lihi Lapid, the wife of the outgoing Prime Minister Yair Lapid, announced in an Instagram post last week that she had ‘sued the man who spread the lie that [she is] not a Jew’.

As a brief aside, I have to acknowledge that, whilst I am slowly learning, my knowledge of Hebrew is far from sufficient to competently read, so I will be relying on Instagram’s automatic translation of her post.

This one might stand out as the weirdest in an election that didn’t at all lack controversial issues and personal attacks. In the leadup to the election, Rabbi Tovia Singer, founder of Outreach Judaism, an organisation that works to counter Christian missionary work targeting Jews for conversion, published a video on his YouTube channel. The video was in response to and discussed an article in The Jewish Chronicle, published earlier that day. The piece detailed the apology of a Christian preacher named Chaim Malespin, who had earlier claimed that Lihi Lapid was secretly a ‘believer’ (in Christianity). The Lapids’ spokespeople all said that these allegations were ridiculous and untrue. The original video in which Malespin made this claim to an American Christian congregation had earlier gone viral.

Singer’s video, in which he unpacked his take on this all, included the relevant section of the original video and the video Malespin later released, in which he apologised for his initial statement and said he had later discovered the information was untrue. Singer discusses these videos and the impact that it could have on policy and also the upcoming election if Lapid is indeed a Christian; an election that was already shaping up to be so incredibly close and could swing either way could easily be influenced by such an – to borrow a term from American politics – October surprise. Tovia doesn’t say that he thinks Malespin’s latter video was a lie, nor does he say he believes Lapid really is a Christian. The video is concise, only nine minutes, so I recommend giving it a quick listen.

At this point, one might be wondering what all the fuss is about, and rightly so. A video from some time ago went viral, later the claim made in it was retracted, the video comes up again on the campaign trail and gets commented on; nothing crazy, but here’s where that changes. Lapid responded to this situation with the Instagram post mentioned earlier. From her post that said she had ‘sued the man who spread the lie that I am not a Jew’, one might think she had sued Malespin. Considering his later video apologising and totally withdrawing the claims and declaring them false that would be a legally unwise thing to do, not to mention a pretty morally unkind one. However, it was not Malespin she was suing, but Rabbi Singer.

Here’s where that confusion starts.

Lapid’s post contains many strange claims. She said Singer had ‘spread the lie that I am not a Jew’. This is a frankly bizarre accusation. Not only was it not Singer who made the claim that she was Christian, but no one, not Malespin and certainly not Singer, made the claim she was not Jewish. I don’t want to be too heavy-handed in my dismissal of this puzzling statement; I’m sure that even without any of this, it’s a hectic and stressful time for the Lapids, and we don’t know where spokespeople and media staff get involved. Hence, some bizarre miscommunication and honest mistakes may have happened somewhere along the journey from Singer’s original video to Lapid’s eventual post. That said, Lihi Lapid’s statement, taken as it is, seems to betray a fundamental misunderstanding of the nature of reporting and political commentary, what it means to be Christian and possibly even what it means to be Jewish.

It should be clear to readers that Singer didn’t make the claim that Lapid was a secret Christian. At most, he said it was possible (in a later video Singer posted to his YouTube channel and in an article he wrote for The Jerusalem Post responding to Lapid’s post, he would elaborate that he does not know if she is or isn’t Christian and that he does not know whether Malespin spoke truly in his first or final statement on the matter). Singer merely reflecting on this already-viral story is no more him making that claim than a sports journalist discussing trade rumours is actually the one negotiating an athlete’s trade deal, or a political commentator speculating on the potential outcome of an election is actually the one inaugurating the eventual winner.

Lapid is adamant in her Instagram post that she is Jewish and supports this with a discussion of her grandfather Rabbi Amiel (Z”L), who had been the Chief Rabbi of Antwerp and later Tel Aviv. Whilst an interesting and wonderful fact to discuss in any other context, it is nothing but baffling in this one. Her Jewishness was never called into question, not by Malespin and not by Singer. Some Jews are Christians, and some Christians are Jews. A person is Jewish if they converted to Judaism or were born to a Jewish mother (or, according to some views, a Jewish parent). A Jew who later converts to another faith (such as Christianity) is still a Jew. This is true according to both Christianity and Judaism.

At best, Lihi Lapid’s post indicates that she never watched Singer’s video, and all of this is being handled by lawyers and/or media representatives who are not doing their jobs well. Malespin made an honest mistake he later corrected, and Lapid has failed to do due diligence in her awareness of what has unfolded. On the other hand, the world keeps getting stranger, and Israeli politics is no exception; maybe the Lapids are secretly Christians and want to turn Israel into a Christian theocracy, Malespin accidentally let slip the plan and now they’re all scrambling to do damage control. Or maybe Singer is secretly in the pay of Likud and was trying to swing the election against Lapid by telling everyone that she’s as Christian as the Pope; he knew it was a lie and just didn’t care because he was out to get her and her husband. (I don’t want any lawsuits, so let me be clear, those are jokes).

It is necessary to note that there is a power disparity here. Lapid, as the wife of the outgoing Prime Minister of Israel, has much more media access, wealth, and resources at her disposal. We should all want to see this brought to a conclusion without the need for legal proceedings, and at the moment, the hope for that rests with Lapid, and the ball is in her court.

Ultimately, as someone who values Rabbi Singer’s work and content and would have much rather seen Yair Lapid win this past election, I can’t help but be saddened by this turn of events. There will always be disagreements among the Jewish people on matters religious and political; I don’t expect perfect unison on every facet of every issue. But in a time when antisemitism is on the rise against Jews no matter their religious or political views, antisemitism from left and right, of a religious nature and a secular nature, the last thing anyone should want to see is this. Especially because it could be resolved quickly and brought to an amicable conclusion simply by sincere communication.

So let us pray for that outcome instead.

About the Author
Keegan lives in Perth, Australia and is a student aspiring towards a career in journalism. He loves discussing theology, hoping to convert to Judaism in the future, and also politics, especially Australian, Israeli and American.
Related Topics
Related Posts
Keegan Nazzari