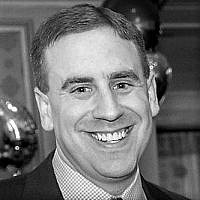 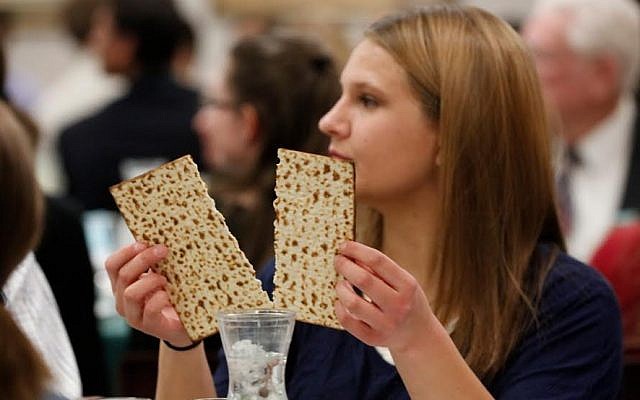 Illustrative: A woman breaks the middle matzah at a model seder on March 11, 2016. (Jaren Wilkey/BYU)

What does the Wicked Child say? ‘What is this service to you?’ (Shemot 12:26). To you and not to him. And since he has excluded himself from the community, he has denied the fundamental principle. So you should blunt his teeth and say to him, ‘For the sake of what the Lord did for me when I went out of Egypt” (13:8). For me and not for him–if he had been there he would not have been redeemed.’
-Pesach Haggadah

Perhaps because I was a Hebrew school nerd, I have always been fascinated by the role of the Wicked Child in the Haggadah. On the one hand, this child is referred to by the text of the Haggadah as “rasha,” the wicked or evil one, one of the highest forms of rebuke we can give in Jewish tradition. A cursory reading of this text could lead one to conclude that this child is the archetype for every Jew we should not invite to our sedarim, the counter-dependent person who decided that because he or she does not find Judaism meaningful, no one else should find it meaningful, either.

David Mamet makes just such a claim in his book The Wicked Son, which he dedicates to all Jews “who find their religion and race repulsive,” the kind of Jews “who are humble in their desire to learn about Kwanzaa and proud of their ignorance of Tu B’Shevat” (xii). For Mamet, the Wicked Child represents every self-hating Jew, the person who chooses not to see the Jewish story as his or her story, and this is the reason the parent is instructed by the Haggadah to remind that child that such an attitude would exclude that child from divine redemption.

In times of high tension, leaders can be tempted to avoid difficult questions. Moreover, most communities and organizations have at least one person who asks uncomfortable questions, one that leaders would rather not hear precisely because the question evokes an uncomfortable truth that releases a previously hidden tension into the open. Yet Ronald Heifetz and Marty Linsky point out that the essence of leadership is having the courage to ask questions that others will not. They write:

…realism must capture both the ugly and the amazing in our lives, unvarnished. To interrogate reality unflinchingly takes courage. The cynical brand of realism, which assumes the worst will happen, is a way of protecting yourself by lowering your aspirations so that you will never be disappointed. But if you never expect anything to work out, you’re never surprised, and, more to the point, you never have to experience frustration. (Leadership On the Line: Staying Alive Through the Dangers of Leaving, 226).

The Wicked Child is the person at our table asking questions we do not want to ask, because we are afraid of where the discussion will go. What is the future of our synagogues? What will be the relationship between the North American and Israeli Jewish communities? Should we criticize established organizations or governments when we feel they do not speak for our values? And does any of this really matter, anyway? We may not like it when the Wicked Child asks that kind of question at the seder table, but the question gets to the reality we need to interrogate, and a harsh response only causes us to retreat into a state of denial.

In a Pesah sermon delivered in 1959 that could have easily been given today, Rabbi Norman Lamm tells his congregants at The Jewish Center in New York City that, “There are those who, in their zeal for Torah, are ready to exclude the Second Son from the Jewish family…Such misguided zeal is doomed to well-deserved failure” (“The Second Son,” Pesah 5719). We may not approve of what the Wicked Child has to say, but Rabbi Lamm reminds his congregation that the passage of the Four Children is preceded by the passage of “Barukh Ha-Makom,” where we say “blessed” four times corresponding to each of the four children. As a result, Rabbi Lamm implores his congregants to remember that “There is blessing to be found in each of the four types of Jew- including the Rasha [Wicked Child].”

The Wicked Child’s question makes us uncomfortable, but the Wicked Child is still blessed, and a vital and thriving Jewish Community never avoids the question of the Wicked Child. On the contrary, a community that is secure in mission and purpose is the kind of community that treats this child’s question seriously, and ensures that he or she feels that there is a place for him or her at the seder table. The more we stifle the contrarian, the more we cocoon ourselves into a worldview where our myopia paralyzes us from seeing a pathway forward. Every Pesah, the Haggadah reminds us that every question has a role at the seder table, and we are better when we seriously consider every person’s question. May it happen soon, and speedily, in our days.