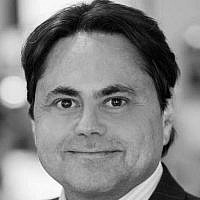 The Blogs
Bryan Miller
Apply for a Blog
Please note that the posts on The Blogs are contributed by third parties. The opinions, facts and any media content in them are presented solely by the authors, and neither The Times of Israel nor its partners assume any responsibility for them. Please contact us in case of abuse. In case of abuse,
Report this post.

This essay is much the same of most politics, with most politicians talking out of both sides of their mouths. Hypocrisy.  Sometimes the circumstances are grave as in this case, where the deceptions are intended to cover up a genocide of Lithuania’s ethnic minorities.

Jonas Noreika was a good-looking man with a benign face.  One has to take a second look, to understand how such malevolent evil could emanate from such a face.  How I learned of Noreika, comes from Grant Gochin, who is a fellow immigrant from South Africa, who has worked tirelessly to have the murderers of his family see truth in the Lithuanian Courts.

Grant’s family was murdered in Lithuania, by genocidal maniacs like Noreika.  Instead of facing justice, the Lithuanians turned butchers into heroes, with schools and streets named to laud them.

Through Grant I learned of Sylvia Foti, author of the book, the “Nazi’s Granddaughter” who is a Lithuanian who was tasked by her mother with authoring a book on the National Hero, Jonas Noreika, her grandfather, only to discover that he was a Nazi sympathizer, who personally oversaw the slaughter of approximately 8,000 –  15,000 Jews.  The book, by the way, is a great read.

In the early 1930’s when Noreika was 22, he authored a manifesto called Hold Your Head High, Lithuanian!!! in which he deifies ultra-nationalism and blames the country’s ills on the Jews, all of whom he considers Bolsheviks (while simultaneously railing against them for being Capitalists). The manifesto is Hitlerian.  As a measure of time, this is significant, because it is before any occupation of Lithuania by the Germans.

Jonas Noreika was part of the resistance against the Soviet’s invasion of Lithuania, in 1940, and was a purported partisan.  Like the German Nazis, the Lithuanian resistance was allied with Hitler in seeking to rid their homeland of ethnic minorities, seeking a pure white ethnic state of like-minded ideologues.  There was no Jew that they considered not a Bolshevik, unless of course, they were a Capitalist which was of equal evil. The overlap of course was that they were born Jewish, and that was a sin that warranted their murder. As a result of Noreika’s role as part of the resistance of Soviet occupation, Noreika was appointed District Chief of Sialiali city and county, and as assiduous and diligent as he was in Jew Hate that 10 years later, ordered the Ghettoization of Jews and confiscation of the Jews property. Noreika personally benefitted from the confiscation of Jewish property, both personally and, ideologically.

In an area for which Noreika bore responsibility, Plunge’, Jews were packed into the local synagogue (directly opposite the local police station) and burned alive.  Packed inside that burning synagogue to die in the most painful way possible, were Grant’s relatives and those of Google’s founders, Sergey Brin, and the family of Rabbi Laura Janner-Klausner, the former Chief Reform Rabbi of UK. Like most genocidal regime’s propaganda plays a major role.  That is why “incitement to genocide,” is an inchoate offense under International Criminal Law.

Through communication, like Goebbels board game, Judein Raus! or Hitler’s cries to rid Germany of the Jews who were “money-grubbing thieves” (Capitalists), the same type of antisemitism was carried out by Noreika, and the Lithuanian newspaper in Siauliai called Te’viske’ promoted his goals. These goals are the precursor to genocide, being the dehumanization of the human being by equating them with vermin, rodents, and cockroaches.

Noreika, calls for the expulsion and eradication of the Jews using communications, and blames Lithuanian’s ills on Jews and Communists.  Noreika calls for revenge upon the Jews and Communists and makes a call to arms, against the Jews.  From a propaganda perspective, there is no difference between Hitler, Goebbels, Muegeserea (Rwanda) and Noreika himself.

At the same time, while the Nazi were the so-called occupiers in Lithuania, there was a gargantuan collaboration by Noreika and his ilk of the murder of Jewish, children, mothers, and families; unquestionably, Noreika acted on his own, in his hate for Jews, or with perfunctory German supervision, only to proclaim he was following orders.  Special uniforms were made which identified the Lithuanian Nazi allies as being part of the Nazi invaders. As to Noreika, let us not forget his Mein Kamp-like pamphlet authored in the early ‘30s which states his intentions.

Indeed, when Soviets occupied Lithuania in 1940, there were far too many Jews, (about 200,000) and far too few Nazis, so the Nazis freely gave their weapons to the Lithuanian murderers in 1941, who did the job for them; with vigor, enthusiasm, and great efficiency, with the Grand Duke, Noreika, gleefully presiding over the butchering of many thousands of Jews.

Propagandists inside Lithuania such as former Foreign Minister Azubalis falsely claim that Lithuanian Courts reviewed the facts of the case and the Courts have similarly declared Noreika innocent of crimes. Azubalis and his kind follow a long tradition of propaganda taught to them by Holocaust perpetrators such as Noreika and Hitler.

While Noreika and his Lithuanian collaborators, committed genocide (a planned extermination of a population or portion of the population under the ICC Statute) and war crimes, they alleged that they were just foot soldiers of the Nazis.  As articulated in this essay, that is just a lie.  Noreika’s handwriting is all over this.  He is a butcher, he burned Jews to death in a Synagogue, and was responsible for the deaths of thousands of others, while stealing their property.

Indeed, the Lithuanians went as far as to create a new form of genocide, a genocide against a “[p]olitical party,” in their quest for moral equivalence and deniability of murder.  This is not part of the ICC’s Rome Statute (1998) [Article 6] nor is it part of the ICC statute today.

This issue of Lithuanian genocide at the hands of the Soviets came to light in the Drelingas case.  Drelingas was convicted under the Lithuanian Criminal Code of genocide of a political group.  The former Soviet Union occupied Lithuania and allegedly committed genocide against Lithuanian Partisans.  Drelingas, a former KGB agent, argued as did the Lithuanians who murdered Jews, as well as the Nazis at the Nuremberg trials that they were merely foot soldiers.

The Lithuanian Supreme Court would have none of this and Drelingas conviction as an accessory to genocide stood.  Drelingas took the case to the European Court of Human Rights, arguing the Ex Post Facto clause or the similar phrase in Latin, Nullum crimen sine lege.  Simply said, you cannot be convicted of a crime which does not exist today but exists tomorrow when you commit the crime today.  The European Court of Human Rights without addressing the merits of the Lithuanian Supreme Court held, given the context and knowledge that existed at the time, Drelingas was guilty and there was no violation of the Ex Post Facto Law. (Article 7 of the ECHR.)

What is the takeaway from my essay?  While the Lithuania Government and Foreign Ministry say they honor and remember the Shoah or Holocaust, that is a lie.  Domestically they rewrite history.

When Lithuanians voluntarily and wantonly murdered and butchered Jews, it was not because Lithuania was occupied. Noreika, and most like him, created and enjoyed the canards and lies about Jews. It is Jew hate with annihilationist intent. We see this in Noreika’s version of Mein Kamp, and all the Lithuanians’ that went along with him.

The greatest danger of all, is the creation of moral equivalence of Genocide of Jews by Lithuania, and by the Lithuanian’s government creative fiction that the same happened to them.

We also see this happening with the ICC, and Fatou Bensoudas’, investigation of Israel for war crimes, but that essay is for a different day.