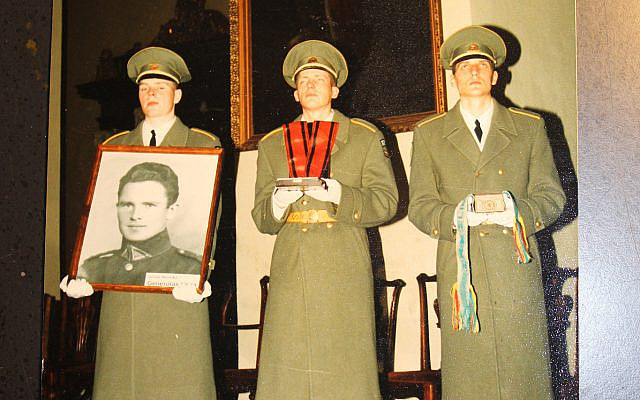 In December 2019, the Genocide Center published the historical finding “On the Activities of Jonas Noreika (General Storm) in the Anti-Nazi Underground,” in which it stated:

These findings were based on the testimony of Father Jonas Borevičius, a priest who lived in Šiauliai during the Holocaust years of 1941-1944, and who was a friend of the family. Father Borevičius was called as a witness in the case United States vs. Antanas Virkutis, who worked as a prison warden of the Šiauliai prison during the Holocaust years.

Father Borevičius appeared in an Illinois district court in Chicago in 1986 to help defend Virkutis, who, it must be noted, lost the case. Virkutis was found guilty. 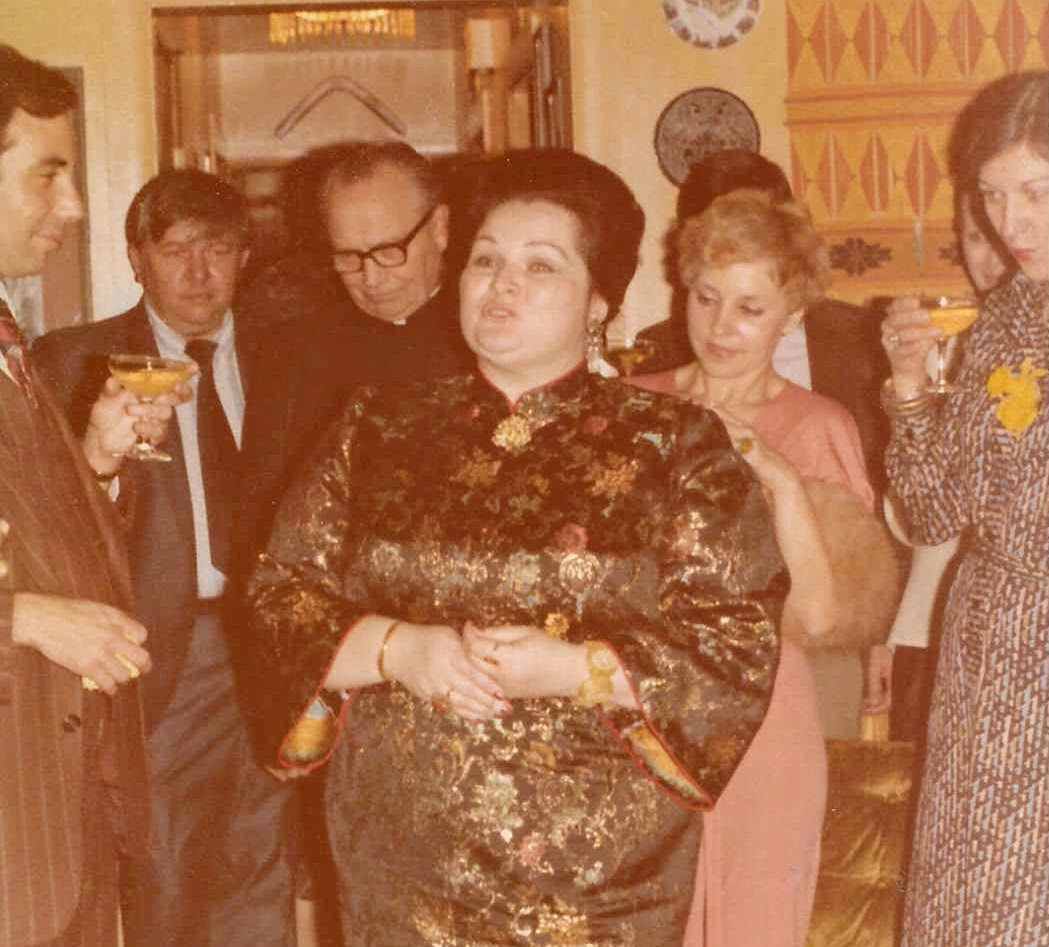 In addition, it should be noted that the Yad Vashem organization has not recognized Father Jonas Borevičius as a righteous gentile, presumably because he could not be linked to any names of rescued Jews.

Because this testimony was so egregious in light of so many documents signed by Jonas Noreika while chief of the Šiauliai district during the Holocaust years–that were glossed over–Grant Gochin, a Litvak based in California who lost about 100 relatives in the Lithuanian Holocaust, sued the government of Lithuania for Holocaust fraud and also demanded their evidence.

The government of Lithuania did not immediately release the 153-page court transcript. It took Gochin almost two years to obtain it. Upon review, it was so feeble that Gochin appealed to have the government findings concerning my grandfather’s rescue of Jews retracted. The government refused.

In writing The Nazi’s Granddaughter: How I Discovered My Grandfather Was a War Criminal, I discovered that Jonas Noreika led the Lithuanian Activist Front (LAF) uprising against the Communists in Žemaitija in June 1941. He was collaborating with the Nazis to overthrow the Russians. June 22, 1941 was the launch of the five-day uprising, the invasion of the Nazis in Lithuania, and the beginning of the Holocaust in Lithuania—in which all but 3 percent of Jews were murdered, the highest percentage in all of Europe. (A Jew had a better chance of surviving the Holocaust in Germany than in Lithuania.)

Just as the five-day uprising ended and the Russians retreated, a vacuum of leadership was left in the Šiauliai region because Ignas Urbaitis, then district chief, had resigned. One can assume Urbaitis knew he would be in charge of murdering Jews in Šiauliai, and he did not want to work for the Nazis.

My grandfather, at the age of 30, officially took the position of Šiauliai district chief on August 3, 1941. However, it is strongly suspected he unofficially took those responsibility in early July, shortly after Urbaitis resigned. There is no other candidate to suspect.

According to information from wartime chronicler and resident of Šiauliai Leiba Lipšicas, on June 28, 1941, two days after the Nazis entered the city (along with my grandfather as head of the LAF in Žemaitija), the LAF began arresting Jewish men. When 300 Jews had been collected, the LAF transported them to Luponiai Forest where they forced the Jews to dig ditches before shooting them.

On the morning of July 11, 1941, LAF headquarters sent about 50 soldiers wearing white armbands in groups of 3 or 4 to arrest more Jews and seize their families’ valuable property. These white-armbanders appeared at Jewish apartments at 9 am looking for gold, jewelry, money, valuable home decorations, bedding, suits, coats, dishes. They brought everything to the Šiauliai police station, headquarters of the municipality. Pointedly, the operation was organized without the Nazis’ knowledge.

Since my grandfather was in charge of the LAF in Žemaitija, and this plunder was so public and widespread, he must have been involved in this, perhaps even ordering it.

Antanas Virkutis, for whom Father Borevičius testified, was also a member of the LAF.

Cross of the Vytis

It was at the Genocide Center’s behest in 1997 that my grandfather received the Cross of the Vytis, the highest honor given to someone posthumously. One of the reasons he got the honor was for leading the 5-day uprising in Žemaitija. The fact that it coincided with the launch of the Holocaust in Lithuania has been disregarded. Civilian Jews murdered by Lithuanians were labeled Communists. End of story. Nothing more to discuss. 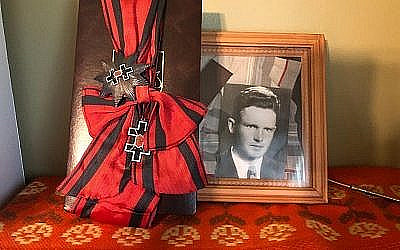 The Lithuanian government awarded the highest honors to my grandfather. Source: Personal archive

The publicly stated main task of the Genocide Center is to research the physical and spiritual genocide of residents of Lithuania under the occupational regimes from 1939 to 1990, the restoration of historical truth and justice, and the development of methodologies for historical research into this period.

By publishing that Jonas Noreika saved Jews, the Genocide Center violates the intent of its creation.

The Genocide Center ignores orders signed by Jonas Noreika for establishing a ghetto for Jews and for seizing Jewish property. The Genocide Center fails to take into account statements made by Žagarė burgermeister Simonas Rakštys, in which he indicated he was assigned to the post of burgermeister by Jonas Noreika at the end of August 1941 when Noreika issued an order for removing Jews to the Žagarė ghetto, that he only worked in the post for two months and the Nazi administration removed him at the end of October (after the ghetto had been liquidated); and that during the time the Žagarė ghetto operated, he exclusively followed the orders of Jonas Noreika and answered directly to him.

The Genocide Center omitted the fact that the Šiauliai district administration (of which my grandfather was chief) paid salaries to soldiers of the Šiauliai division of the Lithuanian Self-Defense Units from September 20 to November 1, 1941.

Genocide Center historian and now director Arūnas Bubnys stated in 2010 about the Šiauliai division (the 14th Battalion) of the Lithuanian Self-Defense Units formed in August of 1941: “The 1st Šiauliai division (55 people) participated in the destruction of the Žagarė ghetto on October 2, 1941. German Gestapo officers, Linkuva auxiliary police bureau members, and soldiers from the 1st Division of the 14th Battalion shot the Jews.”

Now the same institution is telling the public Jonas Noreika, whose district wrote checks to pay the Šiauliai division to liquidate the Jews in the Žagarė ghetto, led the rescue of Jews and didn’t understand the function of ghettos.

The Genocide Center claims Jonas Noreika rescued Jews based on the fact four children of Jewish ancestry were hidden at a hospital financed by the Šiauliai district administration, discounting how the same administration financed the Šiauliai 14th Battalion (1st Division), which directly carried out the mass murder of 2,236 Jews.

A methodology for Holocaust denial

This deliberate reinterpretation of historical facts by the Genocide Center demonstrates a flawed methodology for historical research by failing to assess the reliability of Father Borevičius’s testimony as an historical source, failing to place his testimony in the context of information from other historical sources, such as the Šiauliai archives that house about 70 documents with my grandfather’s name connected to the Holocaust, and relying on the testimony of a single person so that it could come to a factual conclusion that Noreika saved Jews, which contradicts the abundance of primary source documents with his signature and testimonies by other people that Noreika murdered Jews.

Thus the Genocide Center has perfected a methodology for Holocaust denial.

This methodology for “historical research” based on these principles constitutes the re-writing of history. This is Holocaust denial, a continuing and intentional activity of Lithuania’s Genocide Center.

It should be noted that even before the publication of Noreika as a Jew-saver, Lithuania’s International Commission to Assess the Crimes of the Nazi and Soviet Occupational Regimes in Lithuania in an open letter dated April 10, 2019, stated: “We cannot understand why [the Genocide Center] is defending an openly racist and fascist political group, the Lithuanian Nationalist Party, members of whose police units were among the most active persecutors and murderers of Jews,” and: “On August 22, 1941, and September 10, 1941, Jonas Noreika, based on orders from the Šiauliai military district commander, Hans Gewecke, appointed to the post by the Germans, issued orders on the removal of the Jews in the military district to ghettos and the confiscation of their property. … Almost all of the victims arrested under these orders were later murdered. This is the historical reality, based on indisputable documented evidence. If this is not taking part in the process of genocide against the Jewish citizens of Lithuania, then what is it?”

Father Patrick Dubois of Yahad in Unum points out in this presentation that Holocaust denial by a government such as Lithuania enables future genocides. Adolph Hitler claimed that the genocide of Armenians in Turkey had been forgotten, and so enabled him to perpetrate a genocide against Jews in several European nations.

Open letter to the government of Lithuania

I publicly beg the government of Lithuania – please do not use my grandfather to perpetrate your Holocaust denial. Tell the truth about my grandfather’s crimes and allow his victims some measure of peace.

A former journalist of twenty years in Chicago and now a high school literature teacher at Proviso Mathematics and Science Academy in Forest Park, Illinois, Silvia Foti is the author of The Nazi’s Granddaughter: How I Learned My Grandfather was a War Criminal, published in March 2021 by Regnery History. The book has been translated into Spanish and Lithuanian, and is currently being translated into Polish and Hungarian. The paperback edition is coming in June 2022 with a new title: Storm in the Land of Rain: A Mother’s Dying Wish Becomes A Daughter’s Nightmare.