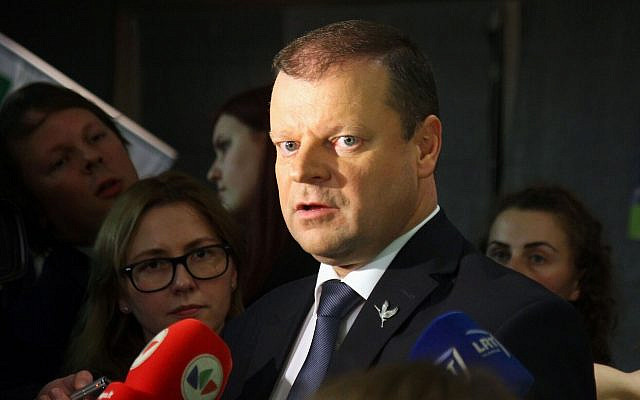 Prime Minister Saulius Skvernelis of Lithuania, seen in 2016, heads the committee drafting legislation declaring that neither Lithuania nor its leaders participated in the Holocaust. (Petras Malukas/AFP)

The recent report that a Lithuanian parliamentary committee was introducing legislation to reject any claim that Lithuania or its officials played any role in the Holocaust reminds me of an incident that I experienced in Vilnius in 1990.

I was part of a small ADL delegation that first visited Moscow and St. Petersburg during this dramatic period of change in the Soviet Union. The Berlin Wall had fallen, the Soviet Union was opening up and satellites like Lithuania were looking forward to new freedoms as the Soviets were declining.

In Vilnius, I was introduced to an individual who was identified as a leader of the Sajudis movement, a group of people seen widely as the hope for democracy in a future of a Lithuania free from Soviet domination. Our conversation began on a highly positive note and I was immediately impressed by this Sajudis representative. We talked for 10-15 minutes about matters related to democratic values: the rule of law, the importance of democratic majorities and protection for minorities, the importance of civil society. I thought to myself that Lithuania will be in great hands with folks like him.

Then I changed the subject and raised the issue of Lithuania’s role during the Holocaust. Suddenly, before my eyes, in an instant, this apparently wonderful and open human being turned into an ogre.

Despite monumental evidence of Lithuanian militias participating in the murders of tens of thousands of Jews in Lithuania, the Sajudis leader simply denied any role of Lithuanians in the horrendous events which resulted in the death of 90 percent of the 250,000 Lithuanian Jews. As I pressed him, he at first doubled down on his denial. Then he changed his response:  maybe there were such murders but, in effect, the Jews got what they deserved because they backed the Communists.

I think of that startling conversation because Lithuania seems to be following the path of Poland, which a while back passed a law making it a criminal offense to blame any Poles for a role in the Holocaust. It showed that even the best in that country couldn’t come to grips with the long tradition of anti-Semitism.

Let’s be clear: Lithuania, like Poland, has been a victim, first of the Nazis, then of the Soviets. To say that, however, does not end the discussion about its role during the Shoah or its history of anti-Semitism. In fact, while recognizing there was a significant difference between what happened in Poland and what happened in Lithuania, what was evident repeatedly during the Nazi onslaught was that one could be both a victim of the Nazis and a collaborator in the slaughter of the Jews.

It is not merely an abstract matter of getting the historical record right that is most significant here, though that is surely important and critical if we talk about honoring the six million. The inability or unwillingness to look at one’s own role in the Shoah makes it well-nigh impossible to come to grips with the depths of anti-Semitism that clearly still exist in these societies.

ADL surveys of anti-Semitic attitudes over the past five years indicate that Hungary, Poland and Lithuania have among the highest percentages of individuals harboring anti-Semitic attitudes among the countries of Europe. It is no accident that these are also countries that refuse to acknowledge any role some of their citizens played in the destruction of Jews and Jewish communities in their countries.

The connection is real because when one admits to that role, one also has to ask how did it come to pass that such horrendous things took place in our homeland. And the unavoidable answer is that anti-Semitism was so deeply embedded in society, when the opportunity presented itself in the form of the Nazi determination to wipe out the Jews, many locals saw that as an opportunity as well to implement their own murderous hatreds.

A three-way process can develop when a nation is willing to look honestly at its past regarding the Holocaust (and one could say this about any form of hate). First, is the importance of the truth to the well-being of the society. Second is asking the question: What was it about our society that enabled such things to happen? And third, having acknowledged the depth of hatred that existed and what it led to, now we can begin to heal and deal with the root causes of the hatred.

When countries like Poland and Lithuania, rather than looking in the mirror, choose to make it a matter of patriotism to enforce denial of any role in the Shoah, they ensure that anti-Semitism will continue to be an integral part of their culture.