“I remember sitting one night in a New York bar with Slava Polunin after just another Snowshow Broadway gig,” recollects clown Fyodor Makarov on the eve of his “Under Construction” show, which will take place tomorrow August 9th at 21:00 in Jerusalem. “I asked Slava why was he doing all this? His reply was: “Humans around are not that happy, you know. Something is constantly sneezing, coughing and gurgling inside them. My job is to stop this gurgling (also within myself) and cause them enjoy their lives.”

For those not in the know – Russian born France based Slava Polunin is counted among world’s greatest living clowns; his Snowshow, presented in more than 25 countries including Israel, “is to clowning what Cirque du Soleil is to circus”, according to Variety. 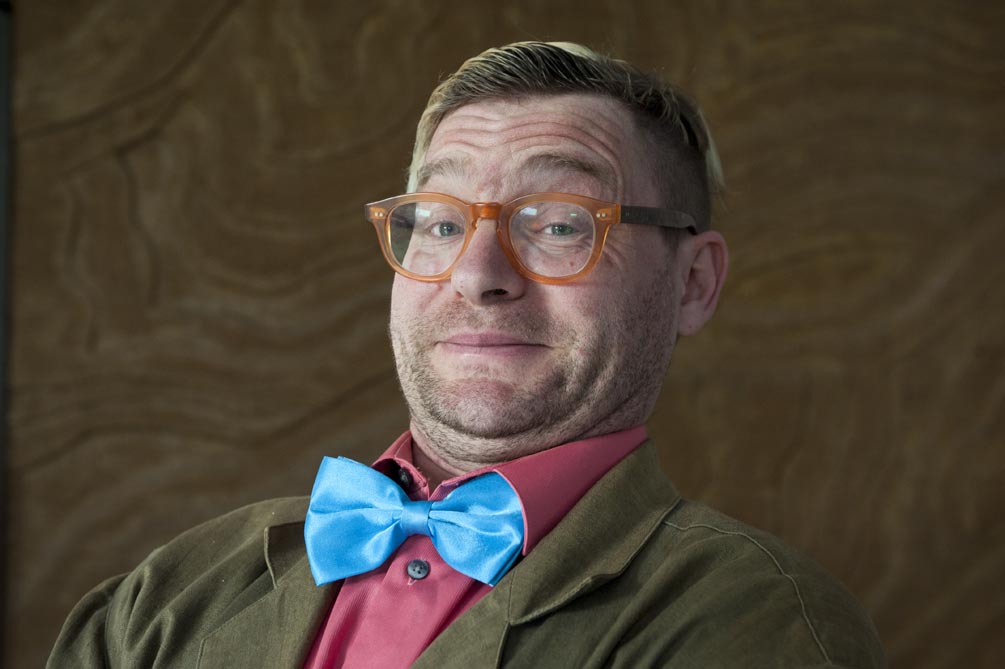 Makarov worked for Polunin’s Snowshow for ten consecutive years, also participating in master clown’s other projects, “Fools on Volga river” among them.

“For about a month we, a group of some thirty clowns travelled along Volga, performing every day just for ourselves.”

Makarov, who still occasionally joins the team, says that “living with a joyful mission was the most important thing which I’ve learned from Slava,” in addition to clownery skills and understanding of how a play house functions. “I’m talking about a living body, full of joie de vivre and not of a dusty academic theater!” he ads with a smile.

Nowadays Fyodor Makarov, arguably one of the most intriguing Israeli clowns, is seen as an indelible part of the local theater stage. This Tel Aviv based happy father of three creates captivating shows for grownups and kids and appears both in Israel and abroad. But his way to the theater world has never been obvious.

Born into a Moscow intellectual milieu, with two generations of leading poets and writers behind him, he “first wanted to be a circus actor, but I was too little, then – a diplomat and learned languages (I think I know seven) and what not.”

Being 14, he immigrated in Israel with his family “and started with translating into Hebrew of works by (Russian absurdist poet) Dani’il Harms for my Israeli girl friend,” he recalls. This translation – as several others, such as books of political satirist Eugene Zamyatin, dubbed “first Russian dissident” or a star of contemporary Russian literature Sorokin.

“I enjoyed the process of translation because this is only about recreating a literary piece in different language and different time, but you are not the author so you don’t bear any responsibility,” he recounts.

“This was fun, but not enough for my self realization,” muses Makarov. In his quest for himself Makarov studied philosophy in the University of Jerusalem as well as photography, and occasionally enrolled to the Visual Arts School in the same city. “I wanted to be a theatrical designer, but then I saw the stage and got hooked. And just stayed.”

The rest is history. Not surprising that even Slava Polunin’s theater was not enough for Makarov. He has left it to launch projects of his own.

Why has he opted for clownery, among all genres?

“I grew up in the world of words. My father was a children’s writer, my mother is a researcher of concentration camps’ art as well as an art therapist, my both great parents were prominent poets and I remember literary evenings at our Moscow home, when people were reading and discussing their poems. So to be honest I was already fed up with words and just wondered who could I express things without words,” says Makarov. Fyodor Makarov has several various projects to his credit (includingmusical ones – he plays several instruments), which appeal for both young and adult audiences and have been successfully presented in Israel and abroad. They include also street shows, performed in the US, India and other countries. Asked about his national identity, Makarov without hesitation defines himself as a cosmopolitan artist, who suits himself to the ever changing surroundings like a chameleon.

Tomorrow August 9th at 21:00 Fyodor Makarov, together with his friends from Davai Theater Group (“Davai” is both “Let’s do it” to “Come on” in Russian) will present his new Under Construction show in Jerusalem’s Train Theater, as a part of the International Festival of Puppet Theater 2017. Davai was founded two years ago in Tel Aviv by Makarov and his colleagues and full partners, artists of their own right – a clown, actor and stage director Losha Gavrielov and a clown Vitaly Azarin. This is already the third project of the group.

“Under Construction is a story of three men who wake up in a state of a terrible hang over, striving for a cup of tea,” says Fyodor Makarov. “The only thing they want is to boil a kettle of water. But nothing goes as planned, everything falls apart. In a way, this show is a metaphor of the contemporary world, where everything is constantly changing, nothing is what it looks like, nothing is safe. And if you want to make something of your life in this dynamic reality you have to work really hard!” concludes Makarov.