It appears that the private sector will lead us to more evolved human behavior, and this will have a positive impact on the entire world.

One of Marco Montemagno’s first questions for Yuval Noah Harari was about global solidarity. Whether it will really happen after this moment or if we’ll forget everything once we get out of lockdown? Yuval replied that we could have reacted with more global solidarity by sharing more information about the virus, and even more information about lockdown policies, instead of each country experimenting on their own. Same goes for the distribution of medical supplies and the economy.

Turning a Challenge into an Opportunity

In my opinion we have a lot to learn from the private sector when it comes to the management of our affairs. Here are some examples from two of Israel’s most successful startups who manage everything from a global perspective. 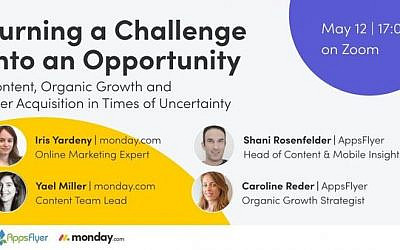 I participated in a webinar called Turning a Challenge Into an Opportunity hosted by Monday.com and AppsFlyer, because I wanted to see how marketing teams dealt with the crisis. The first thing they mentioned was that both these companies are hiring for many new positions.

The hosts demonstrated the changes that had been implemented from the moment the crisis hit and the steps they recommended for navigating the near future. It all seemed quite obvious to me as a marketing professional, but then I realized that all this change had been done under very unusual conditions.

Maybe these talented pros had little kids crawling all over them and needing attention while they were making these strategic shifts, not to mention also cleaning, cooking and doing laundry with everyone in the house. Apparently, all that actually brought out some very unique things that you don’t normally hear. Because the common vibe I heard throughout the webinar beyond the marketing tips were things like: “staying human”, “doing good at the same time”, “asking customers how they were feeling”, “be compassionate”, “providing value” (rather than simply put out content), and “come from a place of empathy”. I don’t think those are standard marketing tactics that you used to hear in the ‘old normal’.

So I did a little research, and discovered that these core values and behaviors come from the founders of these companies. In How to lead in this time of crisis monday.com co-founder Eran Zinman talks about how they immediately decided to pivot to remote work when the crisis hit, and how much effort it took to shift the entire team from their old routine to a new one. And I love the way they talk about this whole process so transparently so that everyone can learn from it.

AppsFlyer CEO Oren Kaniel also pivoted their global team of 1000 to immediately begin working on what the major brands they serve would need for the new reality: “Surprisingly, the COVID-19 crisis managed to buy us some time. We used it to survey our customers and figure out how we can better support them during this new era. We found enormous opportunities to add value, and quickly pulled an amazing project together that I am excited to announce today. The first phase includes a set of new features and enhancements that makes the AppsFlyer platform more remote-work-friendly, productive, and effective.”

During lockdown they produced 6 New Features to Power Through the ‘New Normal’, a feat that could have taken years to pull off in the ‘old normal’.

Since global companies are used to solving challenges together — they are far ahead of governments in the globalization department. They pool all the talents of their global teams to power through to the next stage.

Every Crisis and Its Silver Lining

Globalization has been catching on ever since we became aware of it 20–30 years ago. But today we have a much clearer idea of where all this is headed.

For example, two things that used to be completely opposite were the economy and society. Throughout history this clash caused crises and revolutions that created pressure throughout the entire human network.

This is all about our inability to find the right balance between the main issue — humans — and the means, which is money. This has always created a conflict of interest, and still does.

The development processes the world is going through highlights this in the form of one crisis on top of another. And along with every crisis there is another point, a point of birth.

After every crisis that was due to our previous behaviors and value systems, new values are born that are more suited to our desirable development. There is always the gap between the current state and desired situation that helps us improve and acquire more advanced forms of life.

It appears that the private sector will lead us to more evolved human behavior, and this will have a positive impact on the entire world. When a crisis hits, companies don’t have the luxury of waiting around for things to get better. A healthy business must react swiftly by doing away with the old, and adjusting to the future reality.

Connecting the human and economic aspects with words such as visionary entrepreneurship, agility, belonging, and loyalty, is really a dream come true. So instead of waiting for the next crisis to come along and adjust our perspective again, let’s start making some significant changes. Let’s let the right kind of leaders take us into the new era.

Entrepreneurs heading global companies have a much healthier perspective of our ideal future. We should be paying more attention to how business leaders get things done in a more conscious way. And especially how important it is to them, and their employees, to be contributing in a meaningful way to the whole.