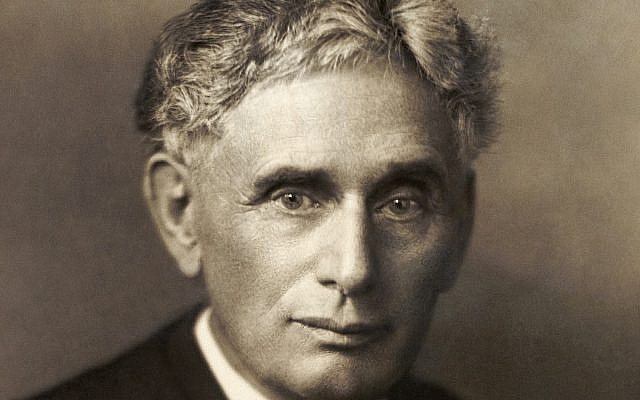 In the week between Yom Hashoah and Yom Haatzmaut, we remember the martyrs of the Holocaust, the fallen in Israel’s wars and the miracle of the founding of the State that emerged from the destruction of Eastern Europe. We should also reflect on the difficult and expensive contemporary struggles descendants of Holocaust survivors experience in recovering looted heirlooms.  Successors to the perpetrator regimes resist accountability for past crimes.  Even the US Supreme Court has thrown obstacles in the way of achieving justice.  However, late last month, the Court carved a narrow path for the heirs.  Fortunately, one of Justice Louis D. Brandeis’s landmark cases formed the basis for the good outcome.

At first, the US seemed to offer Holocaust survivors and their heirs the means to achieve justice.  In the 1990s, under the leadership of Stuart Eisenstadt, Germany and the US signed protocols to facilitate restitution.  Congress did its part. US and international law have, from time immemorial, granted governments immunity from suit for their exercise of authority.  However, in 1976, the US Congress amended the Foreign Sovereign Immunities Act to allow suits against governments which expropriated property in violation of international law.  The legislative history indicates that the amendment  specifically aimed at the Nazis and their puppet plunderers.  The Alien Tort Statute of 1790 seemingly enabled parties to sue corporations in US courts for violations of international law (including crimes against humanity and war crimes).

On the surface, heirs could use US courts to seek redress from the countries that stole their property as well as the corporations in whose possession the looted property landed.

Recent history has proven otherwise. Last year, the US Supreme Court barred suits against corporations for aiding and abetting violations of international law. Nestlé USA, Inc. v. Doe, et al., 141 S. Ct. 1931 (2021).  Heirs have fared no better against governments.  Germany, the signatory of the historic restitution protocols, claimed that “negotiations” between the Nazi government  and a German Jew fleeing its clutches resulted in a “fair price” for an iconic work of art. When the family sued and claimed the protection of the expropriation exception in the Foreign Sovereign Immunities Act, the US Supreme Court claimed that the provision applied only to the property of foreign citizens, closing that avenue for most individuals. Germany v. Philipp, 141 S. Ct. 703 (2021).

Almost two weeks ago, the US Supreme Court left open the possibility of restitution for those who could overcome the hurdle of Germany v. Phillipp to sue in US courts.  The case, Cassirer, et al. v. Thyssen-Bornemisza Collection Foundation, https://www.supremecourt.gov/opinions/21pdf/20-1566_l5gm.pdf, involved the question whose law– federal or state – to apply when a the expropriation exception applied against a foreign government.

A Holocaust heir discovered that a foundation under the control of the Spanish government had purchased the family’s looted work of art.  The heir sued Spain in California federal court.  The country, which had acquiesced in the suit, argued that Spanish law applied; the heir that California state property law governed.  US federal courts have jurisdiction to entertain suits under federal laws (federal questions) , or when the plaintiff and defendant reside in different states or countries (diversity).  Of course, federal question cases apply federal laws.  Diversity cases apply the law of the state in which the plaintiff filed suit.

Spain prevailed in the lower courts under the claim that, because  a federal law allowed the suit to proceed, the case presented a federal question. Federal cases require Spanish law to apply. A third-party purchaser does not have to return the stolen object.  The heir argued, and a unanimous Supreme Court agreed, that the federal law removed immunity.  The expropriation exception did not create any substantive rights.   The suit amounted to a diversity action between private parties.  California law applied and, if successful, the heir would regain the work of art.

Justice Elena Kagan’s opinion did not discuss the reason California law applied – Justice Brandeis’s last major opinion before he retired in 1939.  For almost a century, judges in diversity cases applied federal case law, as in federal question cases.  This resulted in corporations and the powerful, when sued in local disputes, creating residence in other states.  The maneuver would invoke federal diversity jurisdiction, in order to apply the more favorable federal law.  Victims had no recourse from this type of injustice.  Brandeis held in Erie Railroad Co. v. Tompkins, 304 US 64 (1938) that the Constitution did not authorize federal judges to make the rules for essentially state cases.  Federal courts entertain diversity cases to avoid local prejudice against outsiders, not to override state laws.