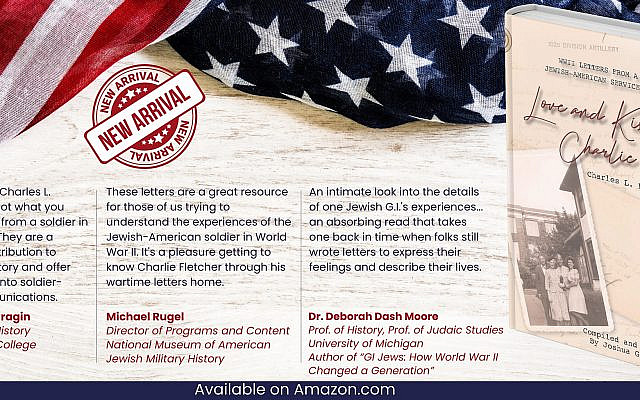 I’m beyond humbled to introduce the book launch of “Love and Kisses, Charlie: WWII Letters of a Jewish-American Serviceman.” Featuring my grandfather’s wartime story, it is a collection of actual correspondence between Charlie and his family during his time in the US Army, both Stateside and in the European Theater.

In Spring of 2017, I visited my parents in Lancaster, Pennsylvania for the holiday of Passover. Together with my wife Devora, and young son Eli, we had made the trip from our home in Jerusalem, Israel to spend much-needed quality time with our extended family. I’d always been a history enthusiast, but after becoming a new father, there was simultaneously born a newfound appreciation and an interest in my learning more about my own historical family roots.

It was this curiosity that found us rummaging through the many boxes in my parent’s attic one afternoon during our stay. Box after box of old family photos and mementos were opened and looked through. One of the final boxes of the day became the catalyst for an unexpected yet wonderful four-year journey.

Within the large box were eight smaller shoeboxes, filled with what appeared to be countless old envelopes, stacked together. Devora picked one letter from the box – completely at random – and began to read aloud.

Another swell package from you…There are some Polish Jews in this town, and I must have met them all yesterday, about 51. The majority have been in concentration camps for over five years, and they certainly have some stories to tell…God knows what’ll become of them. The Poles treated them terribly and none want to go back there. When you see something like this, you begin to realize why Palestine would be such a grand place. These people actually have no place to go. They all speak Yiddish and I understood them, just like hearing my Old Man speak it. A lot came from Warsaw, and they say it was a terrible place for the Jews…

We were left speechless, in awe and astonishment. It was not news to me that my Pop-Pop, Charlie Fletcher, had been a serviceman in WWII. I had grown up hearing him repeat the same two or three Army anecdotes, had happily listened while he sang his Unit’s song very heartily, albeit off-key. But holding his letters, seeing his handwriting, and reading his short but powerful message written more than 70 years before, was among the most profound experiences of my life.

The next few days of our visit found me carefully unfolding every letter, digitally scanning, and organizing the envelopes according to their respective dates. Though I didn’t know at the time what would become of those scans, I knew that these letters and the story within couldn’t remain to gather dust. It became my mission to preserve and share the materials that tell of a world through the eyes of my then 20-year-old grandfather. That is how and why the book Love and Kisses, Charlie is in your hands today.

While reading through and preparing these letters for print, a few matters quickly became apparent. Firstly, this was no “Band of Brothers” story, in fact it was furthest thing from a soaring Hollywood epic. Like some 39% of all enlisted personnel during WWII, Charlie had an administrative rather than a frontline combat position. Additionally, though thoroughly patriotic and proud of his military service, he was content and grateful for his non-combat role, having no false illusions as to the trials and tribulations of war. Furthermore, Charlie’s maturity and inimitable personality take centerstage throughout his correspondence. He was a relatively young man facing a most daunting chapter, yet he maintained his humor throughout and was chiefly concerned not for himself, but for his family, their health, business, and relationships. His letters constantly reassure his parents that everything is “okey-doke” – all while positioned only a few miles from the frontlines while serving in Europe. Finally, Charlie threads a heartwarming and strong cultural and social Jewish identity throughout his correspondence. These foundational characteristics would continue to follow and formulate him on his path in adulthood.

While arranging the manuscript, I added brief historical overviews, personal photographs, and historical footnotes as they relate to and affect Charlie’s personal experiences.

For those who knew my grandfather, or those interested in military/social history, you’ll find a slice of Americana and an intimate perspective on daily life for the regular GI.

About the Author
The Author is a Jerusalem based Rabbi and Jewish Educator, and is the author of the Two Volume book "A People, A Country, A Heritage-Torah Inspiration from the Land of Israel."
Related Topics
Related Posts