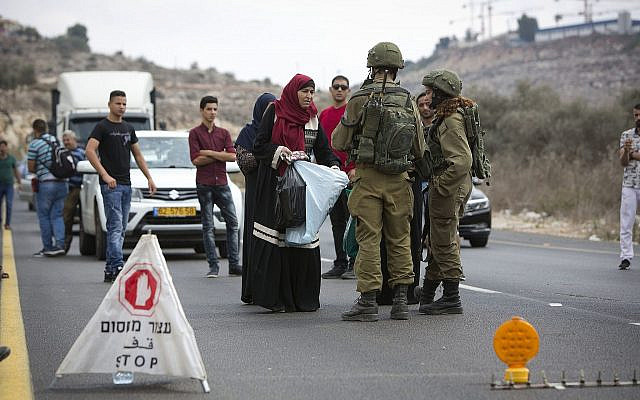 Palestinians wait at an Israeli checkpoint near the scene of a shooting attack at Barkan Industrial Zone in the northern West Bank on October 7, 2018. (AP Photo/ Majdi Mohammed)

The government’s approval yesterday of the strongly contested Citizenship and Entry into Israel Law (Temporary Order), and its decision not to impose coalition discipline on the vote expected later this week, is already raising alarm bells throughout Israel’s body politic and beyond. Although questions of coalition cohesion and longevity, already at the forefront, are further accentuated by this controversial decision, the core issue relates to the extent of Israel’s commitment to some of the most universally accepted basic human values.

The passage of such a law — especially after the incredible brouhaha over the publication of Amnesty International’s report (“Israel’s Apartheid against Palestinians”) — only serves to confirm charges of institutionalized discrimination by Israel against Palestinians, whether within the country or across the Green Line.

Instead of letting sleeping dogs lie after the law failed to garner a majority on July 5, 2021, because the right-wing opposition, which has consistently supported its annual renewal since 2003, brought it down as an act of political expediency, the government has decided not only to renew the legislation, but also to allow the introduction of a much more stringent version proposed by opposition Member of the Knesset Simcha Rotman. None of the alternatives measure up to even the most minimal standards of human rights legislation expected in working democracies.

The origins of the so-called “Citizenship Law,” which bans Palestinians from the West Bank and Gaza from uniting with their Israeli spouses and receiving either citizenship, permanent or temporary residency within Israel, date back to July 2003, at the height of the Second Intifada. Prior to that, family unification within Israel after the1967 was commonplace. During the 1990s alone, over 130,000 such requests were granted. But the breakdown of the Camp David discussions in the summer of 2000, the subsequent collapse of the Oslo process, and the outbreak of organized attacks against Israeli civilians raised extensive security concerns — some involving newly minted citizens and their offspring who had benefited from family unification in the past.

The original amendment to the Citizenship and Entry Law in July 2003 was conceived as a temporary measure for one year in what was explained as extenuating circumstances. The key ostensible driver — then as now — has been security concerns. As stated systematically for 17 years when brought up for renewal, the prohibition on family unification is explained as a means of preventing the infiltration into Israel of persons who may present a danger to Israeli citizens or be prompted to join in violent actions to avoid any harm coming to their families in the occupied territories.

Behind this motive, however, lies another, more latent, one: demography. The ban on Palestinians from outside from joining their spouses in Israel was intended to deter any change in the balance between the Jewish majority and the Arab minority within the country and even, perhaps, to force Israeli citizens to move outside Israel’s borders to live with their families. As Minister of Interior Ayelet Shaked, the key force behind the campaign to renew the law, tweeted just yesterday: “This is an important law for the security of the state and for the maintenance of its Jewish identity.”

From the outset, the adoption of the amendment immediately raised objections in human rights and legal circles. The first, and most consistent, criticism is that this law — however one reads it — is in gross violation of basic human rights. Article 16 of the Universal Declaration of Human Rights of 1948, to which Israel is signatory, states unequivocally: “Men and women of full age, without any limitation due to race, nationality or religion, have the right to marry and to found a family. They are entitled to equal rights as to marriage, during marriage and at its dissolution.” To press home the point, it goes on to state that: “The family is the natural and fundamental group unit of society and is entitled to protection by society and the state.” The right to fall in love, marry and raise a family is denied to Palestinian — unlike other foreign spouses of Jewish — citizens of Israel.

Second, this legal instrument is applied against an entire group — Palestinians as a collective. It therefore subordinates individual rights to group affiliation, something that for years persistently allowed for the victimization of many minorities, including Jews for two thousand years (and especially tragically during the first part of the 20th century). Security concerns can and should be addressed on a case by case basis.

Third, by extension, the limitation of the right to regular family life in this case has a distinctly ethno-nationalist aura. It is applied only against Arab citizens of Israel and not against their Jewish compatriots. This discrimination on the basis of religion and national origin is almost by definition the embodiment of an ethnically-driven structural bias. This is perhaps especially true in this case, as the Palestinians — unlike citizens of Jordan, Lebanon, Iran, and Iraq who were later added to the list of those denied family unification — are not foreign to the land.

Fourth, the annual renewal of the temporary order begs the question of when the temporary becomes permanent. Eighteen years after the initial legislation, despite significant changes in the regional environment, in the security situation (which relies heavily on the ongoing cooperation between Israel and the Palestinian Authority), and in Israel’s position on the ground, the purported factors leading up to the original amendment are no longer applicable. This leaves the demographic motives, with their distinctly racist overtones, as paramount. Surely the 12,700 Palestinians allowed to subsist in Israel today as temporary residents with their spouses (bereft of basic healthcare and social rights) do not pose a “demographic threat” to the country’s Jewish majority.

All these arguments and more have been brought over the years before Israel’s High Court of Justice. In 2006, a majority of the justices decided that the temporary order was unconstitutional in that it contravened Israel’s Basic Law: Human Dignity and Freedom (1992) and especially its underlying principle of equality. Subsequent appeals led, in January 2012, to its reversal by an expanded court of 11 justices who deemed that the infringement of the rights of Palestinian citizens of Israel was proportional, given ongoing security concerns. As Justice Asher Grunis (later president of Israel’s High Court) stated at the time: “Human rights are not a prescription for national suicide.” Since then, even though the court did impose restrictions on the age of those denied family unification, it has consistently rebuffed petitions to overturn the law.

The initial vote on the proposed bills is scheduled for Wednesday. Barring any last-minute change of heart, a mixture of political juggling and pragmatic considerations almost ensure an overwhelming center-right majority in favor of one, if not all, of the suggested revisions. At the moment, only the opposition Joint List, along with Meretz and Ra’am from the diverse government (and perhaps a few other individual coalition renegades), will vote against. In the process, a bad and cruel temporary order, which could easily have been jettisoned forever, will be revived and possibly anchored in Israeli law. However much this might assist certain elements in the government to retain a measure of maneuverability, such a move will neither guarantee stability nor governability in the near future. More importantly, it will put an indelible blot on Israel’s human rights record.

The ban on family unification being brought before Israel’s parliament is an act of overt discrimination unworthy of any society that seeks to protect fundamental human rights and individual freedoms. It is also antithetical to essential Jewish values of human dignity and tolerance. Whatever one calls it — apartheid, systemic discrimination, racism, or unavoidable caution — it is wrong, morally reprehensible, and, unsurprisingly, also unequivocally counterproductive and hence stupid. Hopefully, the political machinations that brought it into being will help it to fall once again — to be buried this time for good.