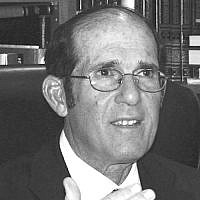 The Blogs
Reuven Mann
Apply for a Blog
Advertisement
Please note that the posts on The Blogs are contributed by third parties. The opinions, facts and any media content in them are presented solely by the authors, and neither The Times of Israel nor its partners assume any responsibility for them. Please contact us in case of abuse. In case of abuse,
Report this post.

We often call a marriage a “match made in heaven.” Yet 52.7 percent of new marriages in America will end in divorce, according to  research from University of Maryland sociologist Philip N. Cohen. Does the Torah provide us with any guidance on how to preserve our unions?

This week’s parsha, Emor, deals with two major topics: the special laws pertaining to Kohanim (priests who officiated in the Temple) and the major Festivals of the Jewish calendar.

The Kohain has a unique status, because he is invested with a higher degree of sanctity than an “ordinary” Jew. In Judaism, greater sanctity incurs additional restrictions.

For example, the Kohain may not marry any woman he chooses. He is proscribed from marrying a divorcée, but may marry a widow; only the Kohain Gadol (Chief Priest) could not marry a woman whose husband had died.

These laws do not sit well with the contemporary mindset. First of all, the very notion of restrictions on the romantic impulse is bothersome. Who are we to interfere with the “desires of the heart,” especially in a matter so vital as love? Moreover, the exclusion of a divorcée, and even more so a widow, seems discriminatory.

There was a time when society did frown upon divorce and regarded those who experienced it as somehow “flawed.” In fact, until recently, conventional wisdom had it that a divorced individual could not be elected to the American presidency.

Of course, that is no longer the case in this era of the new morality, where “everything” is permitted and traditional standards are regarded as obsolete.

This should prompt us to seek to understand the Torah’s attitude toward divorce. It is definitely different from certain other religions that (at least doctrinally) absolutely forbid it.

Judaism is a bit ambivalent on the subject. It regards the marital bond as very serious. A tranquil and stable marriage is vital to the wellbeing of the partners and is absolutely necessary to create the proper environment in which to raise children. Today’s youths already face the challenge of an era of information overload, in which they are all too easily swept up in the false intimacy of electronic communication. The same goes for adults. The home—starting with the foundation of a strong marital relationship—must be a destination for stability and the appreciation of big-picture values, providing a safe haven for parents and children alike.

Therefore, one should approach matrimony with utmost seriousness. One should choose his partner carefully, with the attitude that this relationship will be permanent. He should totally eschew the notion that “if things don’t work out, I can always get a divorce.”

At the same time, the Torah is eminently realistic and compassionate. It takes into account that, no matter how hard we try, we are bound to make mistakes, especially in a matter as complicated as lifelong relationships.

Sometimes, even though a relationship doesn’t seem fraught with tension at the outset, two people are simply not meant for each other, and the dominant theme of their partnership is strife. A mistake has been made, and it is corrosive for people to be trapped in a prison of misery. So the Torah allows us the right to dissolve an ill-begotten union.

In granting this dispensation, the Torah did not want to imply that it is without misgivings. In my opinion, restricting the Kohain from marrying a divorcée makes the point that divorce is a deviation from the ideal. The Kohain is expected to live according to a higher level of holiness. His choice of a partner should not be sullied by the “taint” of divorce.

I must make clear that I do not regard divorced people as “tainted” in any way. The fact that their marriage was dissolved does not reflect on their character nor indicate any moral defect. However, the Torah regards it as imperative to remind us that we should regard divorce as a necessary “evil” and strive to arrange marriages that are permanent.

This teaching is extremely relevant to contemporary Jewish life. Society at large has undergone a radical change in its attitude towards marriage and divorce, and the percentage of dissolved unions has skyrocketed. Traditionally, the divorce rate among Jews, especially the Torah observant ones, was very low.

However, the force of assimilation has taken its toll, and the divorce rate among all Jews has risen alarmingly. This deserves our attention. We are supposed to be a “Holy Nation,” and the ability to sustain happy and lasting relationships is a significant manifestation of our character. Jewish education should devote more energy and resources to instructing our youth to utilize great wisdom in approaching this most important aspect of their lives.

One should not think that, because the Kohain is invested with additional holiness, he is superior to the “ordinary” Jew. He has a sacred duty to perform and, as the representative of the Jewish people, he must adhere to a certain elevated standard. We should remember what the Rambam says: that there are three crowns in Israel, kingship, the priesthood, and Torah. And the crown of Torah, which any and every Jew can seize, is greater than all.

We don’t value a person because of the position he holds, no matter how exalted. The righteous person who occupies himself with Torah study and the performance of good deeds represents our highest ideal. If we hold ourselves to the highest standard—the holiness of the Kohain—and take romantic relationships seriously, our marriages can truly be matches made in heaven.

Sometimes you wake up early on Shabbat morning while everyone is still asleep. The peace and quiet stimulate a desire to contemplate. Prepare a hot cup of coffee and open up Rabbi Reuven Mann’s new book, “Eternally Yours,” on Exodus, and start reading. You will soon find yourself in the world of ideas. Visit http://amzn.to/2G6V3Ql to obtain your copy and join the coffee and Chumash club.

About the Author
Rabbi Reuven Mann has been a teacher and pulpit Rabbi for over 40 years, with a unique ability to inspire audiences about the majesty of Torah. He co-founded Yeshiva Bnei Torah in Far Rockaway, NY as well as the Masoret Institute for Advanced Jewish Studies for Women. He is a sought-after scholar-in-residence and guest speaker at Yeshivot, synagogues, and organizations in the USA and Israel. Rabbi Mann will be based in Jerusalem from May - July 2018, and can be contacted at reuvenmann7@gmail.com
Related Topics
Related Posts
Comments