The Blogs
Nevet Basker
Apply for a Blog
Advertisement
Please note that the posts on The Blogs are contributed by third parties. The opinions, facts and any media content in them are presented solely by the authors, and neither The Times of Israel nor its partners assume any responsibility for them. Please contact us in case of abuse. In case of abuse,
Report this post. 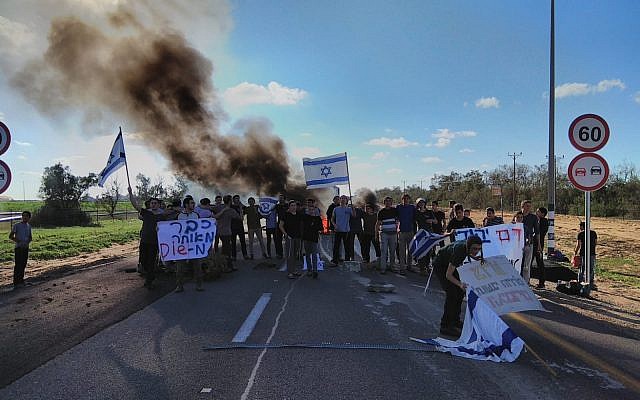 Dozens of high school students from the Neve yeshiva demonstrate next to Kerem Shalom Gaza goods crossing in response to the terror attack near the Givat Assaf outpost on December 13, 2018. (Courtesy)

Last month, Israel engaged in a military operation that did not escalate into a war, resulting in a coalition crisis that did not bring down the government. Non-events, in the global scheme of things, right? But despite the limited scope of both episodes, they revealed two more significant trends with longer-lasting implications. One was the Israeli public reaction to the Gaza ceasefire. The other was Prime Minister Netanyahu’s surprising caution and moderation.

The military clash began on November 11, when an Israeli officer and 7 Hamas leaders were killed in a shootout after a botched IDF intelligence-gathering mission in Gaza. In response, Hamas launched 460 rockets at southern Israel, and Israel targeted Hamas infrastructure in Gaza, including tunnels and its TV station. After a single day of fighting, Hamas announced a ceasefire.

The public and political fallout were swift and revealing. Israelis across the ideological spectrum strongly opposed the ceasefire. And Israel’s defense minister resigned in protest, calling the move “surrender to terror.”

Residents of southern Israel, fed up with living under the constant threat of rockets and mortar fire from Gaza, burned tires and blocked roads. Teenagers marched on the capital. Schoolchildren took to the streets. Community leaders expressed “mounting anger over the truce with Hamas.” So much for the conventional wisdom that people—all people—want peace, while their cynical and warmongering leaders escalate conflict for their own political purposes. In this case, at least, the people of Israel demanded more forceful action than their government was willing to deliver.

Americans are accustomed to anti-war demonstrations—against U.S. involvement in Vietnam in the 1960s and ‘70s and in Iraq and Afghanistan in recent decades. But how often do we see massive protests against a truce—yes, pro-war? A public that is urging its government to deploy its formidable military might, to engage the enemy more forcefully? That’s what happened last month in Israel.

Israel’s prime minister is often described as a “hardliner,” a “hawk,” and even a “notorious warmonger.” Following his 2009 election, a Guardian profile called Netanyahu one who “prefers the politics of confrontation.” And yet in this case, he proved to be a sheep in wolf’s clothing. Criticized from the left, from the right, and especially from the south for his restraint, Netanyahu is the anti-war prime minister, a pacifist in disguise.

The prime minister was the most cautious and moderate member of his right-wing coalition. Netanyahu was denounced by the true hardliners, both within his own Likud party (including environmental protection minister Ze’ev Elkin), and coalition partners Jewish Home (education minister Ayelet Shaked and “far-right” Bennett) and, of course, Yisrael Beiteinu (defense minister Avigdor Lieberman), which withdrew its support from the government, precipitating speculation of early elections (since averted). On Gaza and security, Netanyahu is the dove among hawks, cautious and moderate. Like the anti-ceasefire Israeli public, the prime minister defies his public image.

So the next time you assume that politicians drag reluctant citizens into conflict, or hear that Prime Minister Netanyahu is a “hardliner” or “warmonger,” keep in mind the evidence to the contrary from November 2018. Be skeptical of stereotypes. Things are not always what they seem.

Nevet Basker is the founder and executive director of Broader View, an online resource center about Israel and the Israeli-Palestinian conflict.

Any later updates and additions to this article can be found at http://www.BroaderView.org/Notes/major-lessons-from-minor-events. I welcome your feedback.When the public demanded a tougher response at the Gaza border, Israel’s hawkish prime minister