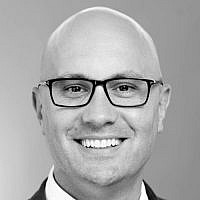 The Blogs
Eric Bordenkircher
Apply for a Blog
Advertisement
Please note that the posts on The Blogs are contributed by third parties. The opinions, facts and any media content in them are presented solely by the authors, and neither The Times of Israel nor its partners assume any responsibility for them. Please contact us in case of abuse. In case of abuse,
Report this post.

Lebanon celebrates its independence on November 22nd.  2022 marks the 79th year since the end of French control and Lebanon’s official entrance into the community of nation-states.

The 79th year of “independence” and “nationhood” is particularly poignant considering Lebanon is unable to elect a president and form a government, unwilling to address a bankrupted economy, impotent against preventing the militia of the political party Hezbollah from plunging the country into another war with Israel, and incapable of keeping the lights on and providing citizens with clean water.

The United States can help reverse Lebanon’s fortunes. It can help restore Lebanese independence and a sense of Lebanese nationhood through one simple but painful step. The United States should terminate all U.S. assistance and cease with the intellectual gymnastics necessary to address Lebanon’s complex problems.

Lebanon is afflicted with a severe case of co-dependency. It produces destructive behaviors that Lebanon has yet to overcome. U.S. aid and assistance in Lebanon acts as an enabler of these unhealthy behaviors and perpetuates Lebanon’s suffering.

The affliction of co-dependence breeds an exaggerated sense of self-worth. The existence of 18 religious communities and their representation in the government gives Lebanon an aura of exceptionalism. The country’s religious diversity and parliamentary system in a region defined by authoritarianism and Islamic extremism is often used as a selling point for aid and assistance. One often hears comments like: “The world cannot afford to turn its back on Lebanon” or “The world cannot allow Lebanon to fail.” If Lebanon dissolves, where does one look for an example of “co-existence” and “democracy” in the Middle East?

The Lebanese also have and continue to be unwilling to resolve their own problems. Throughout much of Lebanon’s history, many Lebanese have sought out or welcomed the assistance of outsiders for addressing Lebanese problems or leveraging power. The behavior has worsened in recent years to the point where authorities seek out help to resolve the absence of electricity.

Co-dependency creates a vicious cycle. An exaggerated sense of self-worth attracts the attention and ultimately the involvement of other countries and international institutions in Lebanese domestic politics. While a reliance on outsiders provides temporary reprieves or slight improvements to the Lebanese state and society, but never lasting solutions. The phenomenon only produces and perpetuates facades and fallacies.

The Lebanese state and its institutions are the facades.

The ministry of the interior failed the Lebanese on August 4, 2020 when the port of Beirut exploded. An egregious act of negligence regarding the improper storage of ammonium nitrate killed over 200 people, injured roughly 7500, and caused $15 billion in property damage.

The Lebanese Armed Forces (LAF) fails the Lebanese at Lebanon’s border with Israel. The militia of Hezbollah, repeatedly defies the state by violating UN Resolution 1701 – a resolution signed by the Lebanese state. Hezbollah builds tunnels and flies drones into Israel.

The ministry of justice continues to fail the family of Lokman Slim and more than a dozen other Lebanese families. Slim’s murder on February 4, 2021 adds to a growing list of more than a dozen murdered politicians, government officials, and activists since 2004. No convictions, let alone trials have occurred in the Lebanese judicial system regarding these crimes.

Co-existence and democracy are the fallacies.

The co-existence of 18 religious communities is largely superficial and tenuous at best. Tempers flared between the Druze and Shia communities in 2021 after a missile-laden truck belonging to the Shia militia, Hezbollah, drove through a Druze village. Tensions exist between the Sunni and the Shia communities in the vicinity of the city of Sidon. The emergence of the Sunni religious figure Sheikh Ahmed Assir in Sidon is a symptom of the faux co-existence. Violence periodically erupts in the city of Tripoli between the neighborhoods of Bab al-Tabbaneh and Jabal Moshen which represent the Sunni and Alawite Muslim communities.

Additionally, co-existence entails a belief in the ability to reach agreements, cooperate, and make compromises. Lebanon is largely bereft of these behaviors. Amidst a historic economic collapse, Parliamentary elections in May have not led to the creation of a new government. It took more than a year to form the previous government whose creation also occurred during the historic economic collapse. Lebanon began November 1st without a President. It took 2 years to reach an agreement on the previous President. In 2008 the Lebanese decided on a President in Qatar after intrastate military conflict.

Elections are meaningless. Every election cycle since 2005 has produced varying results and some new faces. However, the unwillingness to effectively govern, create policy, and enforce policy endures. During this time, a state budget was not passed for 12 years. Some analysts celebrated the 2022 Parliamentary results as a sign of change, yet six months later political deadlock continues.

The United States has been complicit in propping up these facades and sustaining these fallacies since 2006. It has come at the price of roughly $5.3 billion. Propping up and sustaining are generous characterizations. The U.S. has witnessed diminishing returns as it increased its investments. During the 17 years and billions of U.S. tax dollars, Lebanon descended from a dysfunctional state and society to a dystopia.

Take for example the U.S. investment in the Lebanese Armed Forces (LAF). The United States has provided the LAF with over $3 billion in military education, training, equipment, and weaponry for 17 years. The purpose of the investment has been to support the last credible Lebanese state institution, make the LAF a counterweight to Hezbollah’s militia, help Lebanon strength control of its borders, and fight terror.

American aid and assistance have only maintained the semblance of an army, but U.S. tax dollars are not meant for charades. They are meant to advance U.S. interests and protect U.S. national security. None of the objectives for funding the LAF have been fulfilled. Terror attacks continued (2013-15). It also relied on the assistance of Hezbollah to fight terror and manage the border. Hezbollah remains stronger than the LAF. As previously noted, Hezbollah has reasserted its presence at the border with Israel in violation of UN Resolution 1701.

With the implosion of the Lebanese economy, the U.S. has decided to broaden its investment in the LAF by paying the salaries of Lebanese military officials beginning in 2022. But like previous investment, it continues to be pointless and a wasteful use of American tax dollars. In July the LAF failed to deter or prevent Hezbollah from launching drones at a gas rig operating in Israeli waters. The incident brought Israel and Hezbollah to the brink of war. Ironically, Lebanese President Michel Aoun celebrated Hezbollah’s action as working in the interest of Lebanon, the very actions the U.S. are trying to prevent.

As each day passes, the LAF is happy to accept American money but unwilling to advance U.S. national security interests. It is not an issue of impatience and expecting results after a few years; 17 years have passed with little change. And yet, the U.S. government continues to bet on a losing horse.

Another example is the hundreds of hours devoted to “resolving” the dispute over the maritime boundary separating Israel and Lebanon. Senior adviser for energy security at the State Department, Amos Hochstein, negotiated a settlement to the dispute in October. The Biden administration celebrated it as “an anchor for regional stability and prosperity.”

However, the agreement demonstrates few long-term outcomes or ensures stability. Like with much of the aid and assistance preventing Lebanon from completely imploding, the border agreement allows Lebanon to temporarily avoid a volatile situation but does nothing to resolve long term issues. For example, the resolution to maritime border is supposed to give a green light to Lebanon to develop a gas field located in the Mediterranean Sea. An analysis of the border agreement indicates that is not a done deal – more hurdles remain.

The track record of the Lebanese working in the benefit of the nation does not bode well. Besides the time it will take for the harvesting of the gas field to begin, a major question remains whether Lebanon – the people – will receive the benefits. Corruption in Lebanon has been and continues to be rampant. Also, Hezbollah claims that the border dispute is not entire resolved – 5% of Lebanese waters remain occupied by Israel.

The Biden administration remains intent on upholding and sustaining the facades and fallacies of Lebanon. U.S. Assistant Secretary of State for Near Eastern Affairs Barbara Leaf outlined that commitment to the Woodrow Wilson Center on November 4th. Similar to the resolution to the maritime boundary, now talk focuses on trying to get electricity to Lebanon via Egypt, Jordan and Syria. One major stumbling block is how to deal with Syria without the regime in Damascus benefitting or defying U.S. sanctions. Inevitably the U.S. government will spend hours trying to figure out how to circumnavigate the obstacles presented by Syria. But to what avail? If the Biden administration is successful in this endeavor, will the Lebanese build upon this achievement? The answer is likely no. There is no track record. And why? Why do something when you can always find someone else to do it for you.

While President Biden remains committed to Lebanon, evidence demonstrates that most Lebanese are not committed to their country and have not been for some time. Emigration from Lebanon remains a constant. While the daily departures of Lebanese from Beirut International airport are not as dramatic as the scenes witnessed on the tarmac of Kabul International airport in August 2021, they embody the same idea – people who have no faith in their country or are unwilling to fight for it. Many Lebanese have lost hope in the idea of Lebanon. Considering the current set of circumstances in Lebanon, it is not difficult to blame them.

The reality raises an interesting conundrum. Why does the U.S. believe in Lebanon more than the Lebanese? How is Lebanon expected to succeed when their own people are abandoning it?

The Lebanese need to be left to their own means and devices to figure out their problems and realize their potential. The Lebanese are capable of great things. My time in Lebanon has repeatedly demonstrated this fact. Many have thrived after leaving Lebanon. For example, Rima Abdel Malek was named the French Minister of Culture in May 2022.

For the Lebanese to believe in the Lebanon, they must be the owner and resolver of their problems. It is for that reason that the U.S, needs to terminate its aid and assistance. There is no other treatment for Lebanon’s co-dependency. Without the termination of aid and assistance, the vicious cycle created by co-dependency cannot be broken. As Lebanon’s largest supporter, termination can send a message that the Lebanese must be responsible for their own situation. And hopefully it will start to put Lebanon on the path toward making Lebanon independent again. Lebanon’s 79th year of “independence” could be a watershed year if the U.S. chooses to act decisively.

About the Author
Eric Bordenkircher is currently a Research Fellow at UCLA's Center for Middle East Development (CMED). He is a former Visiting Assistant Professor at Claremont McKenna College and Pepperdine University. And a former Lecturer in the Political Science Department at UCLA.
Related Topics
Related Posts