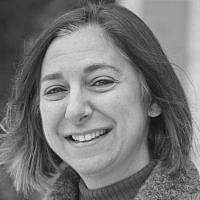 The Blogs
Marcie Lenk
Apply for a Blog
Please note that the posts on The Blogs are contributed by third parties. The opinions, facts and any media content in them are presented solely by the authors, and neither The Times of Israel nor its partners assume any responsibility for them. Please contact us in case of abuse. In case of abuse,
Report this post.

There is no Christmas in Jerusalem. Of course, that is not true. The many churches in the Old City, Ein Kerem, and elsewhere in this city will be filled with Christian worshippers and curious Jews on Christmas Eve and Christmas Day. Bethlehem and Nazareth are bursting with activities for the Christmas season. Yet the fact that the Jewish calendar is the national calendar of the Jewish State of Israel means that for most Israelis, December 25 will pass as an ordinary work day. After I immigrated to Israel from the United States in 1988, I always felt a comfort and even relief in the ability to live in the one place in the world where Jews can live in private and public without being bombarded with the symbols of Christmas.

Then I went back to the US for my doctoral studies. Living in Boston for most of that time, I was overwhelmed by the ubiquity of Christmas. Many American Christians bemoan the fact that Christmas in America is so commercialized, and I sympathize with their concern. Through my Jewish eyes, however, the Christmas decorations in stores, along every street, in television commercials, and even on the news showed me that religion and state are not absolutely separate, even in the United States. The fact that American presidents, unlike Israeli politicians, take their oaths of office on Bibles is one of many indications that the United States is in many ways a Christian country. While Christmas symbols are most often promoted by those who make money from them, and Santa Claus does not usually talk theology, the fact is that Christmas is about the birth of the Messiah (Christ) for Christians. For non-Christians in America, there is almost no escape.

I recently returned to live again in Israel, and while it is a pleasure to live by the Jewish calendar once again, the non-Christmas experience is less of a relief than I expected it to be. I have no nostalgia for the relentless stream of Christmas jingles or glitter. But there is something that I learned as a member of the minority in the United States that I would love to see here in Jerusalem. While abstaining from Christian religious rituals, American Jews cannot help being taken in by the atmosphere of generosity. For American Jews, Christmas serves as an opportunity to learn about another religion, as a time to appreciate the values of a different group, and even for what Professor Krister Stendahl used to call “holy envy.” For Stendahl, this meant allowing oneself to feel inspired and challenged by the other, even while remaining within the boundaries of one’s own identity.

As the majority culture in the State of Israel, we Jews must consider how religion is best expressed in the public sphere. There are so many countries with Christianity (and Islam) in the public sphere, while this is the only Jewish country in the world. With a defensiveness that borders on triumphalism, we rarely make space for Christian and Muslim symbols and expressions (a notable exception is Haifa University’s recent decision to cancel classes on Muslim and Christian holy days, in addition to Jewish holy days).

The hiddenness of Christmas in Jerusalem is a result of this sentiment. Jewish sovereignty should, however, lead us to a different way of relating to the Christians and Muslims in our midst. While Christmas in America is everywhere and therefore often overwhelming for non-Christians, Christmas in Israel can be valued and admired without being hidden away. As the majority culture, we must learn about the other without fear of losing our own identities.

About the Author
Dr. Marcie Lenk is a Shalom Hartman Institute research fellow, the institute's Director of Christian Leadership Programs and Co-Director of New Paths: Christians Engaging Israel. She received her Ph.D. at Harvard University and, for more than two decades, has taught Early Christianity, Hebrew Bible, and Rabbinic Literature at institutions such as Boston University and City College of NY, as well as at Jewish and Christian seminaries in Israel and the United States.
Related Topics
Related Posts
Comments