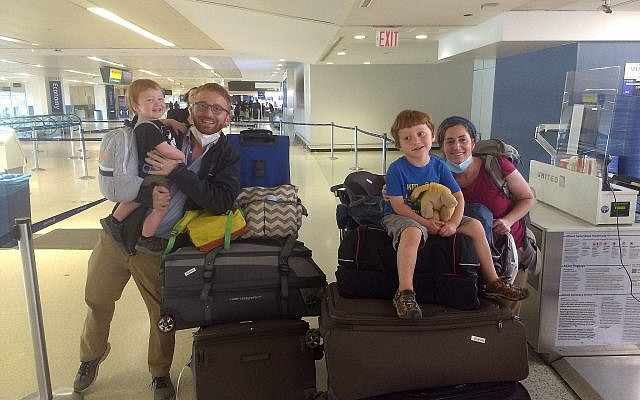 My Family On Our Way Back to Israel (courtesy of author)

Last week, as the protests over George Floyd’s murder began to gather steam in America, my family made the most significant move of our lifetime, we left America and moved back to Israel. My wife and I left Israel five years ago to work as a rabbinic couple at Princeton University. At the time we had no children and did not know when we would return to Israel. So much of our lives have changed in the past five years and the world feels completely different.

It feels particularly strange to be leaving America at this moment of great tumult, pain and unrest. As a rabbi who grew up in New York and worked for many years in America, a large part of me feels a sense of responsibility to stay in America. I feel like I should be there to grapple with the issues of racism and inequality that have been at the heart of these protests. I should be part of the attempt of American Jews to learn and grow through this period and to make America a better place for all. However, Israel is calling me.

As an American I feel a deep sense of responsibility to the success and future of the country and its Jewish community, but as a Jew I feel even more of a sense of a responsibility to the future and success of Israel. While America was my home for many decades, in many ways I never felt totally at home there. As a part of the Jewish minority, I was always aware that America was made to tolerate and include me, but was not established by, or run by people with the same vision and values as me. On only a few notable occasions could I look to leaders of American political and civil society and see someone with whom I really identified – culturally, religiously, and personally. That is what it means to be a Jew living in Diaspora. I sense that this is what it may feel like to be an African American living in America as well.

In Israel however I feel whole. The lingua franca is the language of my tradition. The culture is in conversation with thousands of years of Jewish history. Religious life here has flourished and developed in exciting ways which make American religious life feel at times stifled and boring. Here Judaism is alive in music, politics, and prayer. The street names, ‘Rabbi Akiva’ ‘Herzl’ ‘Ben Yehuda’ reverberate with a sense of meaning, history, and inspiration that ‘Broadway’ and ‘West End Avenue’ will never have.

And yet, as I leave an America whose blemishes are being revealed for all to see, it is important to remember that Israel too has its imperfections. I believe that Israeli society is yet to fully reckon with its own problems of racism, how to relate to the non-Jews living in its midst, let alone the Palestinian nation living within its borders. Israel has its fair share of profoundly serious challenges including but not limited to a broken political system, a Rabbinate that does much harm to religious life and freedom, and a Prime Minister on trial for corruption charges.

Nevertheless, as a Zionist and Jew I have always believed that Israel is my country. These problems are our problems, created by our people. Not the problems created by white Christian men hundreds of years ago. This is the country where the Jewish people have a responsibility and an obligation to struggle with, take responsibility for and to correct our societal ills. America is and will always be another chapter in the history of the Jewish Diaspora. The improvement of American society will ultimately not be a Jewish task, but an American task. The amount that American Jews can and will contribute to solving America’s ills will necessarily be limited in nature. This is not true for Jews living in Israel, where we have full responsibility and obligation to impact the country that we live in.

This week in Israel we will read the story of the twelve spies that Moses sent to tour the Land of Israel. The spies returned to the Jewish people in the desert with conflicting reports. Most of the spies reported that the land of Israel was a horrible land, a land of giants, a land that devoured its denizens. ‘We cannot conquer this land’, they proclaimed. It is too intimidating a task. It is impossible. Only two spies – Joshua and Caleb – disagreed with them. They saw the same challenges that lay before the Jewish people. They knew that living in the Land of Israel would not be easy. Nevertheless, they proclaimed, “Let us go up to the land and inhabit it. We will be able to do this… The land that we saw is indeed exceptionally good!”

I believe that the difference between Joshua and Caleb’s positive attitude and the ten spies who demurred was based in perspective and faith. Caleb and Joshua understood the challenges that lay before them, yet they had faith that God would be with them and ensure their success. The other spies were disheartened and even paralyzed when faced with the same set of challenges. As I begin a new life here with my family, I am aware of the challenges that lie before us and before the Jewish people living in Israel. Nevertheless, like Caleb and Joshua I am committed to approaching these challenges with faith and positivity. I will not be disheartened by the obstacles that lie ahead of us, no matter how scary they may seem. I believe that the Jewish people in the land of Israel can and will create a more just society and I am excited to be part of that process. I believe that this country, even with its problems, is still the same exceptionally good land that Caleb and Joshua saw, and has potential to be even better.