One day in the spring of 1960, my parents gave me a couple of dollars and told me to go to the movies for the afternoon because they had “to go to the closing on our new home.” I was 11 years old and living in Middle Village, Queens. So, I walked up the hill on 75th Street to the Arion Theatre on Metropolitan Avenue.  You could do a lot of things with two bucks in those days, so I paid my 35 cents admission and bought some nosh. A lot of nosh.

The movie I saw that day was “On the Beach.”  It starred the always stoic Gregory Peck, the sultry Ava Gardner, a still dapper Fred Astaire, and a new actor, Anthony Perkins. 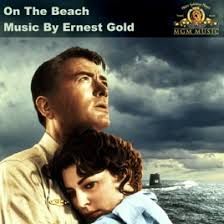 On the Beach is set in 1964.  It’s a tale of the aftermath of nuclear war.  Spoiler alert – everyone   dies in the end.  Peck is a US submarine captain whose ship and crew made it through the war and is now in Australia.  The nuclear fallout cloud has spread around the world and Australia is the last remaining place on the planet where people are alive.  But they know the cloud is coming, the government is handing out cyanide pills, and it’s just a matter of time before the end comes.

In 1960 New York City and many other major American cities were surrounded by the Nike missile system that was designed to shoot down high-flying bombers and we were still having air raid drills at PS 87.  A hallway alarm would go off, and we would get under our desks, direct our rears towards the classroom’s large windows and bend towards the floor with our hands folded behind our necks.

At the end of the movie, we are shown an Australian street scene where a sign warning of the end flaps in the breeze and discarded newspapers and trash swirl through the air. It was all very real to me.  And the specter of 1964 being five years away, kept me up for more than a few nights.

And here I am, 60 years later, sitting with my wife in Jerusalem in the midst of the Covid-19 outbreak.  It’s our aliyah trip.

Rosalyn and I talked about making aliyah in the mid-1970s, our first-born, Alisa, had been born, and the subject just popped into our heads.  But I fretted about moving to Israel as a new American lawyer, not knowing the language, and worrying about how I’d put food on the table.  So, we put it out of our minds.

We gave our children yeshiva educations.  Through them we came to understand that Israel was and still is central to the survival of the Jewish  people.  Our daughters studied in Jerusalem after high school, and Alisa was murdered in a terror attack in the halcyon days of the Oslo accords while a student at Nishmat.  They were truly not halcyon days, by any stretch of the imagination, but Shimon Peres wanted us to believe they were.

In 2004, our youngest child, Etan, had had enough of New Jersey (perhaps me?) and found an ulpan/work program at Kibbutz Sde Eliyahu.  So, we packed him up, gave him some instructions and sent him off to kibbutz.  I am not going to say he thrived at first because he had a problem with the formal ulpan program, but he learned how to order pizza for delivery from a shop in Beit Shean, and worked hard in the kibbutz’s enterprises; milking cows, cleaning stalls and counting bugs at Bio-Bee.  Two years later, he decided to stay for good, has a good job and two little sabra girls to show for it. As one of his sisters said to me, “who would have thought it.”

Early one morning about six years ago, I read Hillel Halkin’s essay in Mosaic about “Letters to an American Jewish Friend.”  I remember going upstairs to the bedroom to get dressed for work and saying to Rosalyn, “we have to make aliyah.”  “Ok,” she said, and I headed off to work forgetting the whole idea.

I’m a very lucky person (except when it comes to picking stocks) and truly love what I do to make a living.  I couldn’t just give it up and retire but I also didn’t want to die at my desk as I’ve seen other attorneys do.  An exit strategy was in order.

I’ve brought my daughter and son-in-law into the office, sold our home in West Orange and settled down the Jersey Shore where I promptly opened another office where I work 40 hours per week.  Some exit strategy.

During a trip to Israel for Thanksgiving week, though, the aliyah bug hit me again.  This might be a perfect strategy, I thought. Be in Israel roughly half the year and New Jersey the other half. I started to look at Jerusalem apartment rentals on-line.  I put out of my mind finding a 150 sqm apartment in my price range.  If one had three bedrooms and 2 baths, we’d be good.

I started the aliyah process on-line but was frustrated by the pace.  So, on a January trip to Jerusalem I met with the folks at the Jewish Agency.  They told me we’d make aliyah through their office.

Documents were ordered and obtained but with our flight scheduled for Sunday March 8th, it looked as though I would be short one document. It seems the folks in New Jersey government couldn’t find my FedEx request for an apostille.  I contacted a local government official to complain.  Whether he helped, I do not know, but that afternoon I received word from FedEx that my package was on the way to me.  Quickly scanned after arrival, I sent the missing document by email to Jerusalem.

The folks at JAFI made an appointment for me at Misrad Hapnim for Tuesday morning, the day after our arrival.  We arrived for our appointment on time, realized we forgot to bring our US passports, went back to get them, and again sat down at the clerk’s desk.

An hour later, the clerk, without a word, slipped us documents under the window.  I asked, “that’s it, we’re citizens?” “Yes,” she replied.

No balloons, no one waving signs of welcome, no one to wrap their arms around us and say, “welcome home.”  Instead, my eyes filled with tears and we headed off to lunch in the German Colony and then to sign the lease on our apartment.  It has three bedrooms and three ad one-half baths. ,

My nightmares of what would happen in 1964 came and went, and, even though we’ve been on lock down, Covid-19 and what it portends for the weeks and months ahead hasn’t given me any.  As an Israeli friend said in an email to me when I arrived, “this, too, shall pass.”

It’s good to be home.

About the Author
Stephen M. Flatow is the father of Alisa Flatow who was murdered by Iranian sponsored Palestinian terrorists in April 1995 and the author of "A Father's Story: My Fight For Justice Against Iranian Terror" available from Devon Square Press and on Kindle. He is an oleh chadash.
Related Topics
Related Posts
Stephen M. Flatow
Comments