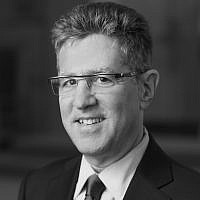 The Blogs
Ammiel Hirsch
Apply for a Blog
Advertisement
Please note that the posts on The Blogs are contributed by third parties. The opinions, facts and any media content in them are presented solely by the authors, and neither The Times of Israel nor its partners assume any responsibility for them. Please contact us in case of abuse. In case of abuse,
Report this post.

With all this talk of making America great again, I have been reflecting on what constitutes national greatness.

It is in the principles embedded in the soil and the soul of this country: A nation conceived in liberty and dedicated to the proposition that all are created equal, endowed by our Creator with certain unalienable rights, among these, life, liberty and the pursuit of happiness. The intensity of our dedication to these principles is the measure of our greatness.

Great nations deserve and require great leaders. Great leaders are not measured by their boasts of greatness. In fact, our religious tradition teaches that the greatest leaders are the most humble: “This man, Moses, was very humble, more so than any other man on earth,” says the Bible.

Humility does not imply weakness, passivity or even false modesty.  Rather, it recognizes the solemn enormity of the task and our own limitations. “I have been driven many times upon my knees, my own wisdom seemed insufficient,” said Abraham Lincoln. “Why do I have to repent; why do I have to ask for forgiveness if you are not making mistakes?” said Donald Trump.

We pray that in the years ahead President Trump excels. His success is ours. But we cannot compromise on core American values or religion’s central principles. These include:

Mercy: “Love mercy,” proclaimed the prophet, Micah. While it is true that every country must control its borders, it is also true that most American families came from somewhere else. America is great because it welcomes immigrants. We cannot stand idly by at the sea-washed gate disparaging the tempest-tossed wretched refuse on the teeming shore.  The refugee crisis is the most catastrophic moral failing of our times.

Equality: We are all equal before God, endowed with equal dignity and equal worth. “What reason have you for assuming that your blood is redder than another’s,” ask Jewish sages, “perhaps his blood is redder.”  We must resist measures that make America smaller again, more intolerant, more suspicious and more fearful.

Economic justice: The measure of a great society is the extent to which it cares for its weakest elements. “Defend the poor and the fatherless,” the Bible urges. “Open your mouth and plead the cause of the needy.” We must speak out against an unfair economic system that places an undue burden on those who can least afford it, and not enough burden on those who can most bear it.

Decency: “Love your neighbor as yourself;” this is the central principle of religious thought. “Another’s dignity should be as precious to you as your own,” teach Jewish sages. “Whoever shames another in public it is as if he shed his blood.”  We must be vocal in calling out anyone, including the president of the United States, who gratuitously and cruelly humiliates fellow Americans. To those in the incoming Administration who are so concerned about being respected and honored – we are mindful of the advice of Jewish Sages: “Who is worthy of honor? Those who honor others.”

Founding Father Gouverneur Morris spoke of the greatness of the new American nation in the year 1800: Our greatness, he said, “is in the national spirit. It is in that noble spirit which prizes glory more than wealth and holds honor dearer than life; a high, generous and noble spirit, elevated above all low and vulgar considerations, despising what is little and mean, whether in character, council or conduct. It is generous, granting freely to the weak and to the indigent protection and support. It is noble, dreading shame and dishonor as the greatest evil.

When this spirit prevails, the government will be wise and energetic. I anticipate the day when to command respect in the remotest regions it will be sufficient to say, ‘I am an American.’”

About the Author
Named among New York's "Most Influential Religious Leaders" by the New York Observer, Rabbi Ammiel Hirsch is the senior rabbi of Stephen Wise Free Synagogue in New York City. City & State New York magazine named him "the borough's most influential voice" for Manhattan's more than 300,000 Jews. He previously served as executive director of the Association of Reform Zionists of America.
Related Topics
Related Posts
Comments