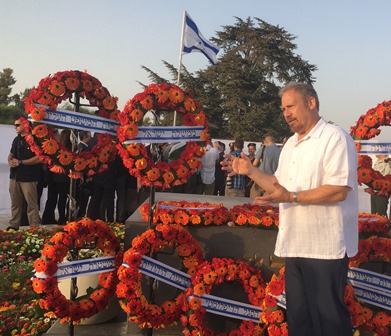 I lingered by his tomb for a moment of contemplation after the crowd had dispersed. Suddenly a voice jolted me out of my reverie. “Making dreams come true begins with waking up,” he said simply. I was even more startled when I turned and saw who it was. With that striking black beard, vintage top hat, and stately tuxedo, it was as if he had just stepped off the dais back in Basle. Considering we had just marked the 113th anniversary of his death he looked remarkably well.

“All this empty talk of pursuing my vision. It’s made me roll right out of my grave,” he grumbled, clearly agitated. I looked around. No one else seemed to see him. It was last Thursday, and the annual state ceremony in remembrance of Theodor Herzl had just ended. “This isn’t the Jewish state I had in mind when I wrote the book,” he sighed. “Nor what I imagined when I convened the First Zionist Congress. ‘It is true that we aspire to return to the homeland of our forebears,’ I proclaimed to those who had assembled, ‘but what we wish to cultivate there is a new blossoming of the Jewish spirit.’ Instead you are squelching it. You’ve had 120 years to get it right, but from what I can see, things are only getting messier by the day.”

“I warned you,” he went on, quoting from his seminal work that launched the Zionist movement: ‘Shall we end by having a theocracy? No, indeed… We shall prevent any theocratic tendencies from coming to the fore on the part of our priesthood… Rabbis shall receive honors high as their valuable functions deserve, but they must not interfere in the administration of the State which confers distinction upon them, else they will conjure up difficulties without and within.’”

And this is precisely what has happened, he lamented, citing the government’s recent decision to freeze implementation of the agreement that would have allowed equal access to the Western Wall for Jews of all streams and persuasion, as well as its initial decision to advance legislation that would give exclusive authority to the ultra-Orthodox Chief Rabbinate over matters of conversion.

He continued with harsh criticism of the relentless torrent of condemnations of Reform and Conservative Jews issued by Israel’s chief rabbis and by Knesset members representing Shas and United Torah Judaism, who referred to the liberal movements, in which, he noted, he had also grown up, as a plague that would be responsible for the ruination of the Jewish people. He spoke in disbelief of pending legislation that would make the donning by women of a tallit, the traditional prayer shawl, anywhere in the Western Wall area a crime punishable by imprisonment. And he bemoaned the increasingly aggressive campaign of a growing number of rabbis that would forbid women from serving in the army, reminding me that he had explicitly envisioned the emergence of a society in which all young people, “men and women alike, are obligated to give two years of service.”

I tried to say something, but clearly this was not going to be a conversation. He had come from the world beyond in an effort to preserve his legacy and he had more to say.

The Kotel decision and conversion law are not only an affront to the Jews of the Diaspora, he told me emphatically, shaking his head in disbelief that the average Israel was not making the connection between these issues and the things that effect their daily lives. The encroaching hegemony of ultra-Orthodoxy will impact directly on all who live here, he warned: the half a million immigrants from the Former Soviet Union and their offspring who are not considered Jewish – as well as those who they are marrying, those who want access to the corner grocery store or public transportation on Shabbat, and on and on. It all boils down to the same issue, he argued: Is there more than one way of being Jewish and is this democratic Jewish state we claim to have created going to recognize that?

Suddenly the figure before me began to fade. “I’m afraid I’m running out of time,” he said regretfully, and I seem to have used up the little I had complaining only about the muddle you’ve made of matters of religion and state. If I had more time… but I don’t. Only enough to repeat what I said more than a century ago.

“’All that you have cultivated will be worthless and your fields will again be barren, unless you also cultivate freedom of thought and expression, generosity of spirit, and love for humanity.’

“’Those of us who are today prepared to hazard our lives for the cause would regret having raised a finger if we were able to organize only a new social system and not a more righteous one.’

“’I truly believe that even after we possess our land, Zionism will not cease to be an ideal. For Zionism includes not only the yearning for a plot of promised land legally acquired for our weary people, but also the yearning for ethical and spiritual fulfillment.’

“So wake up,” he said, “before it’s too late. Make my dream come true. Make it yours.” Then, as he continued to fade, he began humming a familiar tune… What was it? Right, that’s it:  “You may say I’m a dreamer, but I’m not the only one. I hope someday you’ll join us…” And then, as mysteriously as he appeared, he evaporated before my eyes.