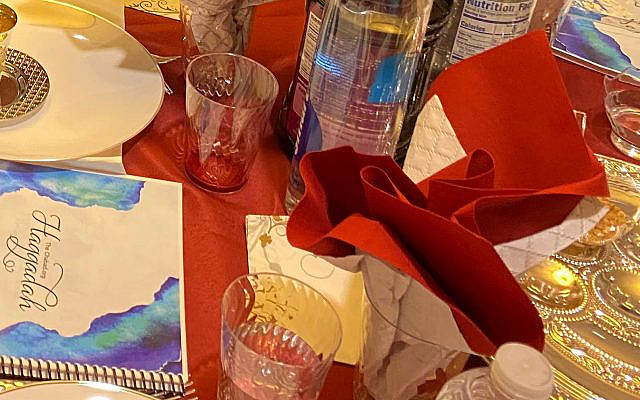 We were invited to a beautiful Passover Seder hosted by Chabad. It promised a meaningful rendition of the Passover Haggadah, good community friends, and a feast of a dinner. So of course, we went!

The Rabbi and Rebbetzin worked so hard to make it a beautiful event. Their children even read the Ma Nishtana (‘Four Questions”) and shared tidbits of Torah during the Seder that they had learned in yeshiva. We made sure to fulfill all the mitzvot of the Seder from the washing of the hands, saying the blessings, retelling the story of our exodus from slavery, and eating the special foods.

The funniest thing though was when one family with a young child had to leave the Seder early. They packed up their things to leave, said good evening, and headed for the exit. But then I see the man one more time at the lavish Passover buffet table.  Wait, he wasn’t taking a little more on his plate, instead he was actually loading a couple of the trays of roast beef and chicken into a box and packing it to go. Since the meal was still going on, I suppose that I couldn’t help looking at him with more than a little surprise on my face: like what in G-d’s name are you doing walking out with the buffet? And then, oh he caught my eye, and looking back gave me the funniest guilty smile that I have ever seen. But not to misjudge anyone, as it turned out, the Rabbi announced at the end of the Seder that everyone should take whatever was left over home, because they had no use for it and would otherwise just end up throwing it out, since at home during Passover they don’t eat ready-prepared foods, but only what they themselves make. So, I realized that the people that had left early had also gotten the message and the buffet didn’t just “walk out the door.” I must admit that we ourselves also ended up with plenty of leftovers for the rest of the holiday, and oh my G-d, I need to watch my weight.

Anyway, this all reminded me of a funny joke about food and Kashrut that I heard recently. It goes something like this: A religious Jewish man dies and goes up towards heaven. He’s standing before the gates to go in, and an angel of the L-rd stops him, and says “Before you are admitted to heaven, we have a delicious, lavish feast for you to partake of.” The Jewish man being stringently observant asks the angel: “Who is the mashgiach (i.e., who supervised the Kashrut) of the food at this great banquet?” The angel is a little taken aback by this man’s question about the kashrut, but then responds reassuringly that G-d Himself was the mashgiach over the banquet. However, instead of the man being satisfied by this answer, he stops again to think for a moment, and say to the angel, “Can I get the fruit platter?”

I guess as Jews, we always have food on the brain. Like my dear father, Fred Blumenthal, used to joke about the forever discontented man in the restaurant who complained that the food was so terrible, and on the top it the portions were so small!

After the Seder last night, I told the Rabbi sincerely that He and all of Chabad are a true inspiration to me. While no one is perfect, I do generally see Chabad as representing authentic Judaism and observance of the mitzvot. There is something about Chabad’s selflessness (like my own father and mother were) that they not only carry out G-d’s commandments, but they also help others to rediscover their Jewish roots and strengthen their connection to G-d and the Torah. Moreover, I see Chabad not only performing genuine good deeds, but also always b’simcha (in happiness) with a big smile, even generously letting others take the Passover buffet home with them. To me, this is truly a taste not just of a festive and kosher Passover, but of the times of Mashiach where rather than fighting over the scraps of food, there is so much plenty and caring that we can’t even give it all away.