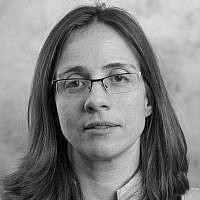 The Blogs
Anat Thon-Ashkenazy
Apply for a Blog
Advertisement
Please note that the posts on The Blogs are contributed by third parties. The opinions, facts and any media content in them are presented solely by the authors, and neither The Times of Israel nor its partners assume any responsibility for them. Please contact us in case of abuse. In case of abuse,
Report this post.

The main statutory provision requiring a medical personnel to treat all patients and businesses to deal with all customers, whatever their nationality, sexual orientation, or other group identity, is the Prohibition of Discrimination in Products, Services, and Entry into Places of Entertainment and Public Places Law 5761-2000. The law was passed mainly to prevent “selection” at the entrances to clubs, after a series of incidents in which prospective patrons were excluded, purely on the basis of their appearance. The intention was to promote equality, stamp out discrimination and racism, and prevent a serious blow to human dignity. Since its passage, the law has provided women, Mizrahi Jews, Arabs, LGBTQs, and others, with vital protection against discrimination.

Over the years, the legislature has tightened the oversight and enforcement of its provisions in order to deal more effectively with unacceptable episodes, such as that involving Moti Wadja and Arye Schwartz, two accountants who tried to enter a club but only one — who was not of Ethiopian origin — was allowed in. This case spawned an amendment to the law that put the burden of proof on the discriminating entity.

Now, instead of protecting the law and acknowledging its importance, United Torah Judaism and the Likud have reached an agreement to add three items to its text, each of which would, in effect, make it meaningless and seriously infringe on the right to human dignity and protection of the value of equality.

First, is the proposal to permit gender segregation by modifying the definition of this term so that this no longer would be considered to be unlawful discrimination. Gender segregation is one means to exclude women, manifested in imposed segregation between women and men and between boys and girls in the public space. For all these years, there has been sweeping agreement by all governments that gender separation and the exclusion of women constitute unlawful discrimination. For example, Government Resolution 1526 (2014) stipulated that, “the exclusion of women in the public space is a dangerous phenomenon that discriminates against women as women, and demands active government intervention to stamp it out.

This is so because the phenomenon is incompatible with the principle of equality, which is one of the fundamental principles of the State of Israel, and is also incompatible with the State of Israel’s international obligations to prevent gender discrimination.” The law’s ban on discrimination is the basis for the court’s disallowing the exclusion of women in various cases, such as the ruling by the Supreme Court in the Kol be-Ramah case (LCivA 14/1697) that the radio station must desist from its declared policy of excluding women and not allowing them to be heard over the air. If the proposed amendment is passed, cases like Kol be-Ramah and others, such as separate entrances to medical clinics, segregation at nature sites, and mandatory separation in cemeteries and buses, would be legalized.

Second, the proposal to allow private businesses to decline to supply services or products on the grounds of religious belief, would give a green light to refusals to serve an individual or group because of their group affiliation. It is difficult to even describe the enormity of the damage that would be done to the country’s moral foundations and its image if private businesses are permitted to deny services or products because of the general and vague excuse of “religious belief,” on a totally subjective basis.

This would be a stamp of approval for discrimination against various sectors of the population.

If in the past the law was the basis for banning discrimination against Mizrahi girls who were refused admission to the ultra-Orthodox Beit Yaakov schools in Jerusalem, for outlawing discrimination against Arabs in the form of humiliating security checks by airlines, and for rejecting the refusal by a printing house to publish a flier solely because the NGO requesting the service defended LGBTQ rights: amending the law would render all of these as lawful. Note too that in the case of a university student who was invited to an academic event at which non-kosher food was served and consequently could not take part in the activity, the court recognized this as discrimination based on his religious lifestyle.

Third, the proposal would permit the establishment and maintenance of residential communities based on religious observance, which would effectively bar individuals from purchasing or renting property only because of their group affiliation. Note that past court rulings have recognized the right of minority communities that wish to preserve their particular status, so that this is not ipso facto- illegal. But this right was recognized contingent on the protection of the basic rights and that the refusal to sell or rent is based on lifestyle and not on nationality, sexual orientation, family status and so on. In practice, the fear is that the amendment permitting the establishment of residential communities on the basis of religious observance would not only serve as a cover for illegal discrimination but would also combine the various proposed changes so as to introduce gender segregation in residential neighborhoods (such as segregated sidewalks and separate entrances to public buildings), in violation of the principle of equality.

Finally, whether the proposals are enacted and dramatically curtail equality and human dignity or do not pass in the end, it is hard not to be concerned about the very fact that such ideas are even advanced and are viewed favorably by Knesset members. Not so many years ago, when the law was first passed, MKs from both the coalition and the opposition cooperated in order to stand up against manifestations of racism.