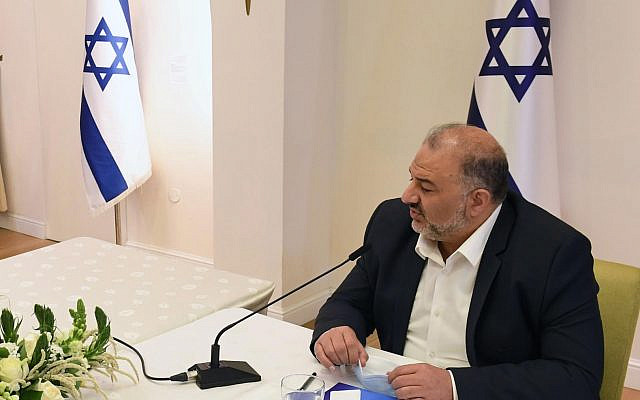 Ra’am party leader Mansour Abbas deserves a lot of respect. He is transforming Israeli politics in ways that would have seemed impossible only two years ago.

First, there is the fact that under his leadership, an Arab party became a year ago part of an Israeli governing coalition for the first time in Israeli history. This was huge progress for Israel’s Arab population. Israeli Arabs are now represented by someone who has substantial influence in their country’s government, and unprecedented progress has already been made under this coalition government in addressing the needs of Israel’s Arab population.

Another transformative action by Mansour Abbas was his declaration six months ago that Israel will always be a Jewish state and that Arabs should move past contesting Israel’s Jewish identity. Abbas said, “This is the reality. The question is not about the state’s identity — but what the status of Arab citizens will be in it.” Not only is this recognition setting the stage for defining in clearer terms the place of Arab citizens in the Jewish state, but it is also signaling to Palestinians that their claim for a right of return will be very limited at best. In doing so, Mansour Abbas has done more to make an eventual two-state solution possible than Palestinian Authority President Mahmood Abbas ever has.

Yesterday, Mansour Abbas made another extraordinary statement. Yamina MK Matan Kahana had previously said, “If there were a button you could press that would make all the Arabs disappear, that would send them on an express train to Switzerland — may they live amazing lives there, I wish them all the best in the world — I would press that button. There is no such button. Apparently, we were destined to exist here [together] on this land in some form.” Abbas responded, “We need to change our way of thinking and live together in the Holy Land out of choice. I want everyone to reach the conclusion that we need to live together even if we had a button. What’s worrisome isn’t the buttons we don’t have but the buttons we do have — of violence and incitement — and that people are pushing them. Even if we have a button, we’re choosing not to push it out of choice and acceptance of the other side. In my hand there is a button I have been pressing since I joined the coalition: one of partnership and tolerance, for all parts of society to arrive at a better place of acceptance to promote the common good.”

If the Palestinians and their Arab allies had been driven by such an accepting viewpoint in the days when the Jews were moving towards self-determination, this part of the world would look very different today. The Arabs would have accepted the 1947 UN partition plan. The Palestinians would have had a state. There would have been no Palestinian refugees from Israel and no Jewish refugees from Arab lands. But it’s not too late to change course and to salvage some of what could have been. Mansour Abbas is demonstrating that.

Part of changing course towards the tolerance that Abbas advocates is for Muslims and Arabs to accept that banning Jewish prayer on the Temple Mount was a mistake and not consistent with living together in peace.

In November 2021, during one of the many periods of violence at the Temple Mount, Mansour Abbas said, “At the moment, there is a status quo where Muslims pray at the al-Aqsa Mosque and Jews pray at the Western Wall. You want to take us to another conflict of religious war? It’s important to maintain this agreement in order to protect lives.”

Abbas’ position is in line with the 40 percent of Israeli Jews who oppose Jewish prayer on the Temple Mount. As reported in the Times of Israel, “Most of the 40% who opposed Jewish prayer did not necessarily do so out of ideological conviction, but due to practical considerations, with 57.5% of them saying it was because it would “invoke a severe negative reaction from the Muslim world.””

Mansour Abbas and the 40 precent of Israeli Jews who agree with him on this question may well be right. Perhaps upsetting the status quo is too big a risk to take at this time.

On the other hand, reasonable people must recognize that preventing Jews from praying at the Temple Mount, the site that is most sacred to them, is absurd and hugely unfair. If anyone can make that point credibly to his fellow Muslims, it is Mansour Abbas who is leader of an Islamist party. I hope that he will.