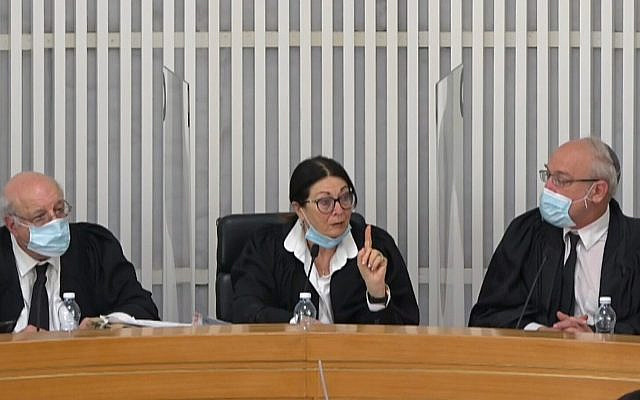 From left to right: Justice Hanan Melcer, Chief Justice Esther Hayut and Justice Neal Hendel at the High Court of Justice on May 4, 2020. (Screenshot)

This post is dedicated to mori ve-rabbi, Professor Shlomo Slonim: thanks to his brilliant teaching at the Hebrew University almost 50 years ago, I can write about Marbury v. Madison almost entirely from memory. I hope that Israel’s chief justice, Esther Hayut, and her 10 colleagues on the Supreme Court’s extraordinarily large panel remember this constitutional-law landmark as vividly as I do when they rule whether a member of Knesset under criminal prosecution can form a cabinet. They can learn a lot from Hayut’s American predecessor’s ruling on a similarly crucial precedent in 1803. Namely, how to steer the court through a political minefield without giving up any of its essential powers. How to be both right and smart.

The US constitution was not yet 20 years old and facing a critical test: the first transfer of power between rival “factions,” as parties were then called. John Adams, who succeeded his fellow Federalist George Washington as president, had just lost his reelection bid to Thomas Jefferson of the party then called Republican (it would ultimately morph into today’s Democrats), Getting as many nominees of the outgoing president’s persuasion into lifetime positions as federal judges was as important then as it is now, and Adams named a raft of them at the last minute. John Marshall, Adams’s secretary of state — then a job much closer to its title — attempted to deliver them in time. But when James Madison, Jefferson’s secretary of state, took over the office, he found a batch of the papers still undelivered, and withheld them. They included the nomination of one William Marbury, a staunch Federalist,

So too was Marshall himself, a seasoned politician who meanwhile had been confirmed as chief justice. So Marbury’s chances seemed good when he petitioned the Supreme Court for an order that Madison deliver his nomination. But Marshall faced a much larger problem. The Constitution — of which Madison was one of the main architects — had left the judiciary’s makeup and powers much less clearly defined than those of the executive and legislature. The principle of judicial review — the authority to void executive measures and congressional acts if they were found to violate the Constitution — was not enumerated, though it had some basis in English law. In retrospect, Marshall is remembered as standing up for this pillar of constitutional democracy; at the time, though, it was also politically expedient to fortify this last bastion against the feared Republican excesses,. But if Marshall granted Marbury’s petition, the new administration might simply disregard it and the Court’s yet-untried authority would remain forever unestablished. On the other hand, giving Madison an unqualified pass was unpalatable. Is this beginning to sound familiar?

Marshall’s masterful solution is his greatest claim to fame. His ruling explicitly canonized the principle that “it is emphatically the province and duty of the Judicial Department to say what the law is,” and acted upon it by striking down the act under which Marbury’s nomination had been issued — thus denying the latter’s petition (and consigning him to oblivion). Jefferson and Madison were unlikely to object, so the ruling was not disputed and judicial review became a bedrock of the American system that went far beyond Marshall’s quarter-century on the Court (Professor Slonim, please forgive my oversimplification!).

Poor Marbury paid the price of a tactical political tradeoff, which was essential to secure a long-term strategic gain that also enshrined a fundamental safeguard. Our justices can also learn that political savvy does not necessarily contradict legal purity. They can and should — indeed, must! — assert their authority, while carefully avoiding the trap of provoking a legislative coup that would cripple their power for good, which their adversaries have long been itching for in the name of “majority rule.” I leave it up to the justices’ wisdom how to craft their version of Marbury — but their decision may be as fateful for Israel’s future as Marshall’s was for America.