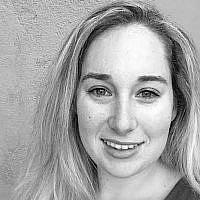 The Blogs
Brooke Weinbaum
Apply for a Blog
Advertisement
Please note that the posts on The Blogs are contributed by third parties. The opinions, facts and any media content in them are presented solely by the authors, and neither The Times of Israel nor its partners assume any responsibility for them. Please contact us in case of abuse. In case of abuse,
Report this post.

This past week as all of us in Israel know was Yom Hashoah, the day of Holocaust remembrance. For Israelis that means on Erev Yom Hashoah all businesses are closed, no music is playing, and Holocaust movies run on loop. There is also the two minute siren for us to pause and simply remember those who perished in the Holocaust and could never see the State of Israel come to fruition.

This is also when the annual March of the Living (MOTL) trip starts their journey. For those unfamiliar with the program, the trip is primarily high school juniors and seniors from around the world, as well as community members who march through various concentration camps in Poland and conclude in Israel for a celebration right on time for Yom Ha’azmaut.

I first learned about MOTL when I was in high school and remember some of my older peers missing prom in order to be a part of the trip. Over the years I’ve seen friends and later, campers of mine, post about their experience while in Poland. The posts shared how the March affected them, many of them grandchildren of survivors, and how special and life changing it was to see what remains of these places that bared the weight of one of the biggest tragedies in modern day.

Last week, when photos flooded my social media feed, something was different. It was no longer a post about what the trip meant to them, but rather photos one would see after a spring break jaunt down to Mexico.

Leading up to The March, there are monthly educational seminars where the participants learn about the places they will see, what they will experience, and how to understand the trip while they are in Poland and Israel. I’m not sure why none of these sessions include even a 30 minute training about appropriate social media practices.

When I noticed this in my feed, I did a hashtag search of #motl and #marchoftheliving to see if this was also happening with people I didn’t know.

Here are just a few photos I’ve seen this year and from past years:

Posing and smiling in front of a train carriage

Photos of 17 year olds decked out in MOTL gear (backwards hats and all as if they’re about to go tailgate for a football game) when actually they’re walking from Auschwitz to Birkenau.

A smiling selfie on train tracks

Yes, the camps were (eventually) liberated and three years later the State of Israel was established. I understand the celebratory aspects even while in Poland, and I get it: I want to celebrate our people too. But the lack of awareness and sensitivity to the photos being posted while on the trip make me wonder what the others scrolling through social media are thinking.

Besides the photos themselves, the comments also left me confused. One comment read “Continue to have fun and enjoy your trip”, as if she was responding to a photo of friends driving jet skis down in Cozumel, rather than a group of Jewish teens visiting the site of one of history’s most horrific genocides.

I’m a product of the Jewish-American community which includes Hebrew school, summer camp, BBYO and Taglit-Birthright. You name it, I’ve done it.

Three years ago, I visited Auschwitz-Birkenau. I was moved by the experience, but felt weird even sharing a “sentimental post” on Facebook, and I’m not typically one to shy away from social media. I’m an Instagram power user and have worked in social media during my career. I’m familiar, and I’d go as far as saying pretty good, at getting people to continue to watch the story I’m telling through photos, videos, and words.

I’m certainly not posing the idea for participants or anyone for that matter to not post photos about what they are seeing.

In fact, I think this is how so many people who will never visit a concentration camp can learn and see (from the perspective of your iPhone of choice). A shocking statistic came out last week that 66% of US millennials don’t know what Auschwitz is. So please, show the barracks, the tracks that brought in countless numbers of Jews (as well as rebels, Roma, the disabled, and countless other groups) from 1941-1945. You can even show the gas chamber if you can stomach it, but maybe be cautious and say what you’re about to show. Social media is a powerful tool and when we know to use it, we can make great change.

If you are smiling in a photo because you are celebrating how thankful and proud you are that you do not fear being Jewish, please tell us that too. I’m with you. I’m thankful we have a Jewish state that’s about to celebrate 70 years of independence.

So March of the Living, Jewish community leaders, and staff members, I implore you to please think about training the students and community members who are coming next year. Here are some questions you can pose to your staff before training:

1) How can participants share their story in an effective and sensitive way?

2) How can participants share without making those who have never been feel isolated?

3) How can MOTL staff aid those who are afraid to tell the story of what they are feeling, feel comfortable to let the world know that this can never happen again.

After all, isn’t this what the trip is really about? If the Jewish community warrants respect from others when visiting our sites, then we must work from within first.

MOTL participants who have just started their trip in my home, here in Israel, please have the time of your life. Take photos smiling and eating sabich while enjoying the Israeli sun. Pose with the hottest Israeli soldier you can find. Learn a few new Hebrew phrases. And when the siren sounds on Tuesday night for Israel’s Memorial Day, and again on Wednesday morning, take a moment and maybe don’t hold your phone to capture it on Snapchat.

About the Author
Brooke has been living the Zionist dream for the past five years after making Aliyah from South Florida. (Except for that one year living the Israeli dream when she moved to San Francisco to try out Silicon Valley tech life.) By day she’s working for a startup and by night she’s instagramming cool restaurants around Tel-Aviv, all while trying to perfect her ר.
Related Topics
Related Posts
Comments