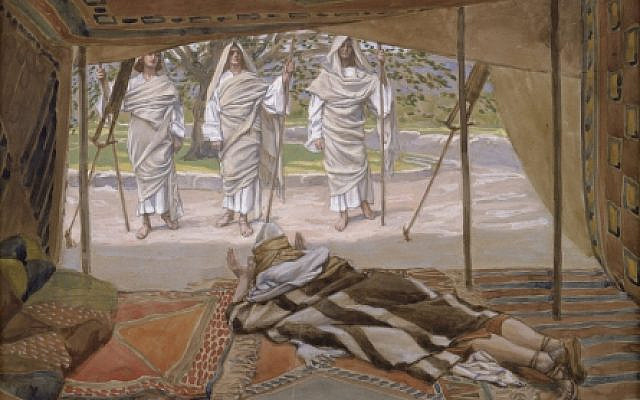 Try to imagine the following scenario. After months of petitioning, you’ve been granted a personal audience with the queen of England, the opportunity for an unprecedented, exclusive interview. You have just been ushered into the reception room and are face-to-face with Her Highness Elizabeth II.

A casual glance out the large window reveals a sizeable tour group gathering outside on the palace grounds. Among the tourists, you see your neighbors from Jerusalem! Who would have expected to see them in London?

You turn to the queen and say, “Excuse me, Your Majesty, I’ve noticed some friends outside. I would hate to miss seeing them. I’ll only be a minute. Please wait here and I will be back momentarily.” And, off you go!

Astonishing? Ludicrous? Unforgiveable? Impossible? At the very least, you’d hardly expect to get a second chance. Nor that the queen would be patiently awaiting your return.

Unbelievable? And yet, that is exactly what occurs in this week’s Torah portion of Vayera. The parsha opens with God’s appearing to Abraham on the third day following his circumcision. Our Sages comment that this is an example of God performing the mitzva of “visiting the sick,” as circumcision for a man of 99 would be a serious and painful procedure.

The midrash expands on the text, explaining that, whereas Abraham always looked to welcome strangers and offer hospitality, God wishes to spare him the effort while Abraham is still in pain. So He makes the day extremely hot to deter travelers from passing by the tent of hospitality maintained by Abraham.

However, our patriarch’s suffering at being deprived of the opportunity of bestowing comfort to strangers proves more powerful than his physical discomfort. Therefore, God dispatches three angels in the guise of weary, idol-worshiping merchants, who pass near Abraham’s tent. Distracted by the appearance of the three “men,” Abraham excuses himself from the Divine Presence and has the “temerity” to ask God to “hold on” until he gets back. He then runs to offer the travelers shelter, food, and drink.

The commentaries are as astonished as we are at this brazen act. To leave the ineffable presence of Divinity, an unimaginable experience granted to a very few, in order to cater to three humans, and idolaters at that! What could Abraham have been thinking?

Many explanations have been given. One of the most beautiful is by the Maharal (Rabbi Judah Lowe of Prague) in his work, “Chidushei Aggadot.” The Maharal’s exquisite explanation is that, in fact, Abraham never did actually turn away from Elokim. He merely shifted his attentive gaze to the Tzelem Elokim within the “human” travelers. Abraham’s gaze pierced through the human exterior to the essential Image of God found within all of His human creations.

We, the descendants of Abraham, are often less willing to attempt seeing beyond the outward appearance, or less successful at doing so, even when we make the effort. The other person’s manner of dress or of speaking, different culture or background, dissimilar education, religious belief, or political position often present a near-impenetrable wall that obstructs our perception of the inner dimensions of “the other.”

Unfortunately, it is the “otherness” that we often focus upon rather than our commonality. What differentiates overwhelms us so powerfully, that we often ignore that which unites. An experiment cited by Rabbi Lord Dr. Jonathan Sacks consists of exhibiting to an audience a sheet of paper, blank except for a single black dot. When asked what they observe, the vast majority answer that they see “a black dot.” He proceeded to point out that, in fact, the by far greatest portion of what they see is pristine white paper. However, humans tend to see the small blot, the imperfection, the tiny fault, the “what’s wrong,” rather than the overwhelming “what’s right.”

This holds true for humans, not only for sheets of paper. We perceive “amiss” over ”amazing,” “grating” over “great,” “controversy” over “commonality.” We are all the children of God. Yet, we emphasize sibling rivalry over brotherhood. The masks that we all wear, whether they are self-imposed or “in the eyes of the beholder,” often hide the Tzelem Elokim that Abraham saw in all people.

And so, unsurprisingly, we’ve come to masks. Interestingly, the word “person” derives from the Latin “persona” referring to the masks worn by actors on stage. Today, we are being trained to see beyond the masks imposed upon us by the current pandemic. In order to recognize or get to know the person before you, we are looking at eyes, the “windows of the soul,” listening more carefully to voices, and noticing distinctive mannerisms. We are making the greater effort because the masks inhibit our former, more easily accessible, facial recognition abilities.

Perhaps this training will also result in our taking greater pains to look beyond the various other “masks” which people wear. With practice, we can be constantly in the presence of the Divinity in our world that is expressed in such a variety of ways, including from within our fellow human beings.

The great test will come when we finally can venture into the world “un-masked.” Will we make the extra effort to search for what unites rather than what divides? Can we meet the challenge of uniting with others by looking beyond and within? Will we remember our need for open friendship and camaraderie and act accordingly?

Let us hope so.

About the Author
Chaya Passow, a graduate of Stern College, majoring in English literature, taught English at the Hebrew University High School in Jerusalem. A lecturer and teacher of Jewish studies both in formal and informal settings, she is one of the founders of Lomdot and Melamdot, a program for advanced women's Torah learning. Since 2002 she has been living her dream of residing in Jerusalem, together with her husband, Eli, and enjoying being savta to a large cohort of beautiful grandchildren. Her new book, 'Letters from Planet Corona' is due to be published shortly.
Related Topics
Related Posts
Comments