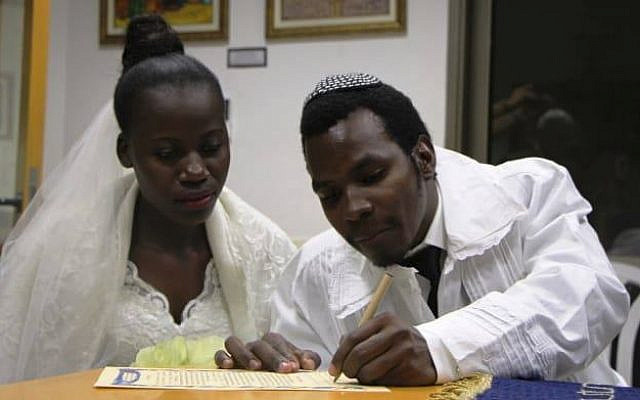 The Masorti movement in Israel is often in the news for our difficulties with government authorities or with elements of the religious establishment. Our good work is usually not, understandably, in the news. This time it was different

In 2002, I had the privilege, along with colleagues Rabbis Scott Glass and Howard Gorin, to be involved in the first conversion Beit Din for the Abayudaya community.  Since that time many others have visited and become involved. Rabbi Gershom Sizumo was ordained at Ziegler, and the community affiliated with Masorti Olami.

It took years of effort to bring the first Abayudaya Birthright group to Israel.

The courts have delayed a decision on the rights of this community to make Aliyah (most are not thinking in that direction) under the Law of Return (delay after delay and now another postponement as we do not have a government in Israel). The young members of this community are not eligible for Masa nor for student visas to CY and other non-academic institutions, as such are visas granted only to those recognized by the Interior Ministry as Jewish.

Rivka and Rabbin were married at Moreshet Avraham (our Masorti shul in East Talpiot) on Saturday evening, after Shabbat. Rivka returned to Uganda on Sunday.  For a variety of complicated reasons it was not until Thursday night that the decision was made to proceed with the Huppah.  Before, there was thinking that the Huppah should be with their community and family back home. In addition, permission is a must from the bride’s father (along with financial arrangements). Costs were also a consideration. In Uganda, the couple is responsible for all costs incurred by the guests – including transportation to and from the venue. Thus, most couples do not actually marry.

The permission from Rivka’s father come Thursday night.  With that, and with Shabbat coming early on Friday, there was much to be done.

The president of Congregation Moreshet Avraham offered up a venue when the first location fell through. A friend helped find a wedding dress and bought a suit and Kittel for the ceremony. Another friend took care of the music under the Huppah. The Rav of Noam, our Masorti youth movement, took care of the ring which was gifted to the groom. We hired a caterer and Klezmer musicians. Masorti Olami offered help. Other friends are offering to cover some of the outstanding expenses (I shall refrain from mentioning names so as not to embarrass anyone who may prefer not to receive credit).

The staff of our Masorti Israel movement came as did students from the Conservative Yeshiva and congregants from Maayanot, Moreshet Avraham, and Kol HaNeshama, and elsewhere. Rabbi Gershom, of the Jewish community in Uganda, blessed the event.

Two members of the Abayudaya community who are currently in Israel accompanied the bride and groom, respectively, down the aisle.

Some of those close to the couple recited the seven wedding blessings and signed the Kettuba.  Over a dozen guests offered remarks under the Huppa just after the Ketubba was read.

The broken glass was not simply to recall the destruction of the Temple. It was also a reminder that our world is still broken but it can be restored by the commitment to the Jewish world of each new family.

Rabbin hopes to go on to study for the Rabbinate. Rivka hopes to do a degree in Jewish education.

This wedding was covered in the news media – as the positive event it truly was.