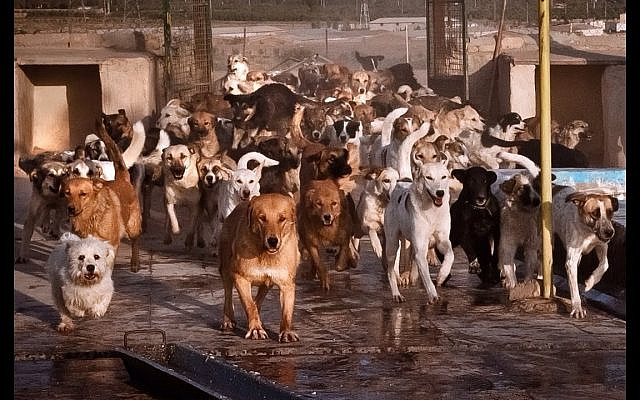 Last month while the world’s attention was focused on the 11-day Israeli-Hamas war, animal rights activists and dog lovers in the northwestern Iranian city of Tabriz were furious and protesting the city’s mayor who had ordered the mass killings of the city’s innocent dogs. As an Iranian American journalist and dog lover, I was shocked and horrified to see the images and video footage of the bodies of hundreds of these dead abused dogs from Tabriz on social media sites such as Twitter and Instagram.

Every year we hear about the monstrous imprisonment, torture and executions the Ayatollah regime’s authorities carry out against innocent human beings who oppose their dictatorship, but with this latest action against defenseless animals in Iran, the regime has reached a new all-time low of moral depravity. Animal rights activists and dog lovers in the free world have a special responsibility to denounce this action and the Iranian regime’s on-going campaign of killing dogs.

While apologists for the Iranian regime in America and Europe may wish to quickly dismiss the current incident of mass executions of dogs in Tabriz as an isolated incident, nothing could be further from the truth. For more than 40 years, the current regime in Iran which follows radical Shiite Islamic laws, views dogs as unclean and has deployed its “morality police” in public places to crackdown on owners of dogs in various cities. Over the decades, dog owners in major cities such as Tehran have been fined and even imprisoned by the regime’s “morality” police for keeping dogs as pets. In various Iranian cities including Tehran, stray dogs are routinely rounded up and executed by lethal injection. In 2015, a graphic video posted online, showing the regime’s officials killings stray dogs by lethal injection in the Iranian city of Shiraz sparked protests after it went viral on social media in Iran. The video depicts a group of men injecting the dogs with what appears to be acid and the animals twitch in agony before they die. Some brave animal lovers and veterinarians in Iran over the years have done their best to try to save stray dogs who have been abused or could potentially face execution by the regime, but their resources and time is limited.

Sadly, not only are dogs and their owners targeted by the Iranian regime, the regime currently has no legislation protecting animals from any cruelty. According to a 2016 Reuters news report, a number of the Iranian regime’s parliament members proposed a bill that would subject dog owners to 74 lashes and a fine of up to 4,000 dollars. Likewise, in 2010 Iran’s Grand Ayatollah Nasser Makarem Shirazi, issued a religious decree that dogs should not be kept as pets. As a result of his decree, the regime’s Ministry of Culture and Islamic Guidance, also banned all advertisement related to keeping, buying, and selling pets.

For their part, animal rights advocates in Tabriz took the streets last month in protest of the municipality killing stray dogs and video footage of their protests went viral on social media sites. The people of Iran have had enough of this regime’s brutality not only against the innocent Iranian population, but also against man’s best friend who are defenseless animals. One is left wondering how the current Biden administration and many European governments wish to give sanctions relief and an economic lifeline to such a brutal regime in Iran which the vast majority of Iranians in Iran oppose so vehemently. How can anyone trust this brutal regime in Iran with dangerous nuclear materials when it doesn’t even show an ounce of mercy or decency to man’s best friend? Dog lovers in America and elsewhere worldwide of all political backgrounds must not remain silent in the face of this regime’s brutality against dogs who are perhaps some of the most loving creatures to mankind. It’s time for the international community to publicly shun the Iranian regime for its crimes against humanity and man’s best friend.

About the Author
Karmel Melamed is an award-winning internationally published Iranian American journalist based in Southern California; He is a member of the Speakers Bureau of JIMENA: Jews Indigenous to the Middle East and North Africa
Related Topics
Related Posts
Comments
Advertisement