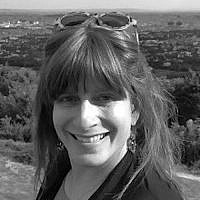 The Blogs
Phyllis Hecht
Apply for a Blog
Advertisement
Please note that the posts on The Blogs are contributed by third parties. The opinions, facts and any media content in them are presented solely by the authors, and neither The Times of Israel nor its partners assume any responsibility for them. Please contact us in case of abuse. In case of abuse,
Report this post.

Extra Extra Read All About It! Sing about it! Hear all about it! Watch all about it! — Master the messages. See just how mindful they are. In turn you will master them…

We have begun with Breishit, chock full of creation and adjustments. We moved to lust and sinning, punishments and curses, population and people reduction and world destruction. There needs to be respite…. somewhere over the rainbow… take a peek and see how Raise your Spirits Theatre has done some sensational things giving us just that much needed reprieve.

Beginning with a released video of one of their hit songs, “Rainbow” (lyrics by Toby Klein Greenwald, music by Mitch Clyman) from their production of “Noah! Ride the Wave!”

This last year and a half we have all been in a teyva/Ark of sorts.

Only several months ago were those ark doors opened, albeit not all the way. So as we exited, we were treated to a very moving rendition of a smash song, that was, for so many, filling a much needed void and giving comfort and strength to start rebuilding our world. CHECK IT OUT:

After Noah we will move into the Abraham and Sara chronicles which are the roots of our nation. The father and mother we hold so dear have done amazing things for mankind and for their offspring which includes us all.

Our next Patriarch, Isaac, becomes an icon of Holiness as the ultimate sacrifice in so many ways. But the one we will focus on, is the lesser known Matriarch, that being Rebecca and the many  details of her life. And so, while we were still humming that Noah “Rainbow song”-there was another smash success that came our way.

Not too long ago,  hundreds of women were able to  bask in the glory of their Biblical roots by partaking in the marvelous production of “Rebecca- Mother of Two Dynasties.” Writers Toby Klein Greenwald (who also directs) and Tamar Kamins have outdone themselves. The magnificent talents of musical director Elisheva Neomi Savir, Choreographer Ashira Allon, Co-producer (with Toby) Tammy Rubin, were so evident throughout the production. Tamar also wrote some of the melodies, but most of the music was composed and arranged by Mitch Clyman.

This production was the culmination of four years of immense and intense research and hard work. This is no ordinary Bible story! The authors have, once again, created a masterpiece out of a very well known historical story.

The audience was treated to a spectacular, creative, deeply, soulful, unique, humorous, and highly entertaining show with wonderful character castings and many eclectic talents simultaneously on one stage. The production spans four Torah portions and delves into interpretation, midrashim, rabbinic literature and teachings.

The original compositions and lyrics, which covered all genres of music, had the audience swaying along and enjoying it immensely. And who can forget the awesome choreography which told a spectacular story in of itself. The characters multitasked in all sorts of roles both human and animal (and even lentils), which brilliantly added to the production.

2021 technology allowed for fantastic LED scenery in the background along with Hebrew and English subtitles which blended so well into the story and truly painted the proper picture.

It’s a story we all know so well and relearn yearly, yet the drama of our Matriarch Rebecca loving her children but pained by the conflicts, confrontations, and missions, really penetrated the soul.

The well known message of our sages of Eisav forever hating Jacob was tempered by the final reading as the narrator quoted Rav Kook who says there is hope in the end of days that these two brothers will unite and ultimately have eternal peace. And in these troubling times that is our hope for all. What a better ending then, with the custom of all Raise your Spirits productions, after a huge applause, as both cast and audience ended the evening with “Ani Ma’amin” and the “Hatikvah,” leaving all who attended on a high and for more than a few, not a dry eye. Although it was their final show — in this series, they announced that the production would play again, bez”h in the fall.

And so, lo and behold tickets are now on sale. Don’t hesitate, only on how many tickets to get, because the ladies who missed out then, certainly don’t want to miss out again. But don’t take my word for it — see for yourselves. You won’t be sorry.

Then after you do see it — while half in the Ark and half out — Let us accept the Challenge. Let us find the meaning in all these messages and work, one by one, as we emerge completely into making our world a safer, better place for all.

About the Author
Phyllis Hecht is living in Chashmonaim with her family since their Aliyah-17.5 years ago from Queens, NY. She is a Judaic studies teacher with an MA in Holocaust studies. Phyllis has a teudat Horaah in teaching English and a license in special education reading recovery. She is also a licensed debating teacher. She has taught business English in Israel and abroad and has taught Holocaust and Judaic studies classes in Israel. Phyllis is currently a High school English teacher and Debating coach at the Zeitlin High school in Tel Aviv.
Related Topics
Related Posts
Comments