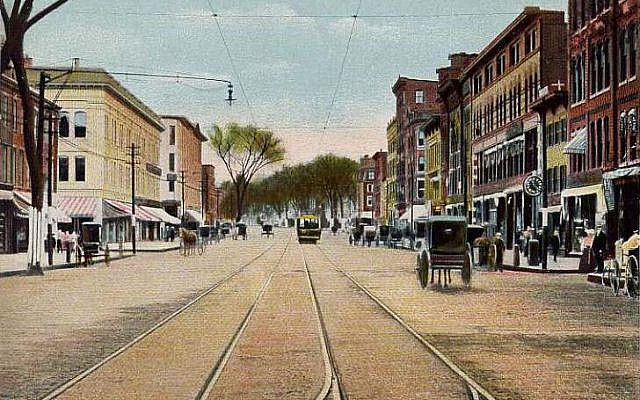 The Feldman family enjoyed a great life, better than the vast majority of Jews alive at the time. It was the 1930s and the Feldman’s led a comfortable life in tranquil Manchester, New Hampshire, a quiet city known for its beauty and quaintness. With the Merrimack river at its center and picturesque scenery, life in America was promising. Their father Rabbi Joseph Feldman had secured a position as a rabbi in the town. Their three beautiful sons, Aaron, Joseph, and Emanuel, would have every opportunity to pursue the American dream. Joseph, born in impoverished Warsaw, Poland, had won the dream ticket to the best of America. While many Jewish parents might have been concerned for their children’s Jewish education, the Feldman’s were in the unique position of having their father, Rabbi Joseph Feldman, right at home.

Yet suddenly, all that changed. Joseph Feldman and his wife noticed that nothing would substitute for a Jewish Day School education despite everything they would impart to their children at home.

Taking a huge risk, in a tough economy and insecure world, they gave their community notice, packed up everything, and left to the far less affluent or beautiful, Baltimore, Maryland. In Maryland, they raised their three children and allowed them to attend a full-day Jewish day school. They did so during an economic depression when certainty was little, and jobs were hard to come by.

The Feldman’s children who grew up seeing the sacrifices their parents made for their Jewish education and took that to heart; the sacrifices paid off and would leave its mark on Jewish history. Their son Emanuel grew up to become the rabbi of Congregation Beth Jacob in Atlanta, becoming one of America’s most respected and well-known pulpit rabbis. Their son Aaron had gone on to become the dean of the Ner Israel Rabbinical College in Baltimore. In this role he would inspire thousands of young Yeshiva students to study Torah and often to go on and become rabbis, educators, and community leaders.

The Feldman’s third son, Joel (who was married to my cousin Shoshana OBM), had gone on to become the principal of Talmudical Academy of Baltimore, educating thousands of young high school students to lead proud and dedicated Jewish lives. We can say with certainty that this family has changed the trajectory of American Jewry, inspiring generations with their passion and commitment to Judaism.

The balance between livelihood, lifestyle, and Jewish education is one that has impacted every Jewish family. Affording tuition, choice of schools, tutoring, whom kids should socialize with, and so much more are questions Jewish parents give much thought and consideration to as they make an effort to raise their children with the values and history they cherish.

This balance finds itself at the center of a historic moment in this week’s parsha.

Even as the Jewish people reach the gates of the promised land, after decades of wandering in the desert, the tribe of Gad and Reuben decide to remain at the gates. Needless to say, this sentiment struck a raw nerve with Moses.

Moses, who had seen the spies dissuade the Jewish people from entering the promised land before (Numbers 13), leading to God punishing them with forty more years in the desert does not spare any words:

“[Thereupon,] Moses said to the descendants of Gad and the descendants of Reuben, “Shall your brethren go to war while you stay here? Why do you discourage the children of Israel from crossing over to the land which the Lord has given them? This is what your fathers did when I sent them from Kadesh barnea to explore the Land” (Bamidbar 32)

The scars of the past are still fresh in Moses’s mind. Moses remembers why they are still wandering the desert thirty-eight years later. Another rejection of the land of Israel does not resonate well with him, so much so that Moses starts getting personal:

“And behold, you have now risen in place of your fathers as a society of sinful people, to add to the wrathful anger of the Lord against Israel. If you turn away from following Him, He will leave you in the desert again, and you will destroy this entire people.” (ibid)

At this point the tribes of Gad and Reuven could usually pursue two different options: they can back off of their request, or they can outrightly rebel against Moses as the children of Israel have done in the desert—several times. Thankfully, cooler heads prevailed and in a major change to the course of history, Reuben and Gad came up with a third idea:

“They approached him and said, “We will build sheepfolds for our livestock here and cities for our children. We will then arm ourselves quickly [and go] before the children of Israel until we have brought them to their place. Our children will reside in the fortified cities on account of the inhabitants of the land. We shall not return to our homes until each of the children of Israel has taken possession of his inheritance. For we will not inherit with them on the other side of the Jordan and beyond, because our inheritance has come to us on the east bank of the Jordan.”

Initiating a new offer, the children of Gad and Reuben address one of Moses’s concerns—that they won’t assist with the conquest of the land of Israel—by assuring him otherwise. Not only will they take part in the conquest of Israel, but they will be at the forefront of the fight. They will build temporary cities for their cattle and children on the eastern side of the Jordan and rush to the forefront of Israel’s conquest. They will share the burden of battle to an equal and even superior extent than the rest of the children.

While their proposal seems reasonable, there is a part of it Moses finds unacceptable, as Rashi here citing the Midrash [Tanchuma Matot, 7] states:

“We shall build sheepfolds for our livestock here- They were more concerned about their possessions than about their sons and daughters since they mentioned their livestock before [mentioning] their children. Moses said to them, “Not so! Treat the fundamental as a fundamental, and the matter of secondary importance as a matter of secondary importance. First ‘build cities for your children,’ and afterward ‘enclosures for your sheep'”

Yes, the offer was appropriate, but the priorities were skewed. Moses urges the tribes of Gad and Reuben to “Treat the fundamental as a fundamental”. Their children’s education must be their first priority. Businesses can follow after that.

Moses understands the real concerns the children of Gad and Reuben have for their livelihood and does not discourage their financial ambitions, yet he does correct their priorities—children’s education must come first.

The importance of this sentiment cannot be overstated. Tragically, our nation has lost too many children to indifference and lack of priorities. This is especially true about Jews settling in America before the day school movement got momentum.

So, is Jewish education worth the sacrifice?

Let us take a look at the children of Gad and Reuben.

The verse in Proverbs chapter 21 states:

“An inheritance may be acquired hastily in the beginning, but its end will not be blessed.”

The rabbis, quoted by Rashi on that verse state:

“An inheritance may be acquired hastily in the beginning: Which one hastened to take hurriedly, e.g., the sons of Gad and the sons of Reuben, who hastened to take their share on the other side of the Jordan, and they spoke hastily, as it is said (Num. 32:16): “We want to build sheepfolds for our cattle here and cities for our children.” They made the main thing of secondary import, for they placed their flocks before their children.”

Similar to what we have seen before, the rabbis criticize the way the tribes of Reuben and Gad prioritize their financial ambitions over. The time, Rashi goes on to share the consequence:

“but its end will not be blessed: For they were exiled many years before the rest of the tribes”

While the financial considerations of Gad and Reuben were legitimate, prioritizing their business over the education of their children, led to their early expulsion from the land of Israel. While deprioritizing Jewish education might have its short term benefits, it can have catastrophic long term implications. The tribes of Reuben and Gad were lost first to the Jewish people as their share in the land was deemed “hasty”; they did not think through what they were doing.

Few cases in history point to this truth like that of American Jewry. Contrary to public perception, American Jewry, with a plethora of Jewish organizations, has existed now for hundreds of years. Millions of Jews have arrived on the shores of North America, starting as early as the 1400s. Synagogues were built, culture was sustained, and social connections were maintained. And yet, it was not until the emergence of the Jewish Day School Movement that Jewish life in America became sustainable. It was not until Jewish education became a top priority that you began to see a generational commitment to Judaism, not only sustained but even increased.

The momentum of the day school movement did not come without sacrifice. Many people, life Rabbi Joseph Feldman, had to make sacrifices. For some, it was financial, for others geographical, and for some in lifestyle. Interestingly, with the rise of the day school movement, American Jewry had not only become more solidly Jewish, but it had also grown in affluence and job market success, all while managing a strong and proud identity.

It is no coincidence that when marching every year on Fifth Avenue in New York for the Celebrate Israel Day parade, the majority of those marching proudly for Israel are either day school students, or day school graduates. A long-term Jewish identity is only possible when Jewish education is a high priority.

The lesson of the children of Gad and Reuben is simple: priorities matter. Of course, we must balance many different things when making big life decisions, yet children’s Jewish education must rank highest. Like the Feldman’s leaving Manchester, New Hampshire, it may seem like a compromise or a loss. It might involve sacrifice, inconvenience, and even hardship. Yet, we can only look at our decisions through a long-term prism. As Jews around the world confront multiple hardships, may we blessed with a world in which people do not need to make difficult decisions and tradeoffs and see only goodness, happiness, and pride in who we are. Shabbat Shalom!