In Judaism it does not matter how long one lives, what matters is what one does with ones life. Max Steinberg packed more meaning into his twenty-four years than most people manage in a lifetime.   As Billy Joel wrote, “only the good die young.”

Max Steinberg was, until last week, a name most of us were unfamiliar with. He was one of the few thousand of Chayalim Bodedim (“lone soldiers”) in the IDF. Those brave ideologically motivated and selfless individuals who leave the comforts of their homes and family in the western world and come to serve our Jewish homeland in the most meaningful way.  All of these soldiers swear the induction oath of the IDF:

I swear and obligate myself on my word of honour to remain loyal to the State of Israel, its laws and its legitimate administration … and to devote all of my strength, and even to sacrifice my life, in the defense of the homeland and the freedom of Israel.”

Max was laid to rest at Mount Herzl Cemetery today, where his family was joined by tens of thousands of fellow Jews from across the political, religious and ethnic spectrum from all over Israel and abroad who came to pay tribute to his memory and his heroism. They came to pay their last respects to someone who “walked the walk” of Zionism. Max’s name and deeds will live into eternity.  (https://www.timesofisrael.com/thousands-lay-lone-soldier-to-rest-on-mount-herzl/) 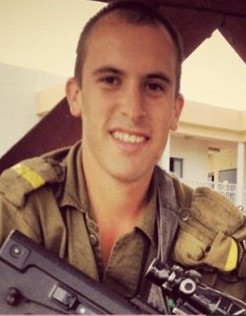 Chana Szenesh, another youngster from the diaspora, also buried at Mount Herzl, wrote a generation ago about striving to seek meaning in purpose in life. At the age of seventeen on the eve of her Aliya to Israel, just prior to the outbreak of WWII she wrote:

“I don’t know whether I’ve mentioned that I’ve become a Zionist. This word stands for a tremendous number of things. To me it means, in short, that I now consciously and strongly feel a Jew, and am proud of it…One needs something to believe in, something for which one has a whole-hearted enthusiasm. One needs to feel that one’s life has meaning. That one is needed in this world. Zionism fulfills this for me.”

Max felt that Zionism gave his life meaning. It was something for which he had a whole-hearted enthusiasm. It made him proud to be a Jew and it makes us proud.

Much has been made of the fact that Max went on a Birthright trip and that is where he found what he believed in and acted on it. As a guide for Birthright since its inception (and a former lone soldier in a combat unit) I can say that the only “agenda” of Birthright is to try and foster the participants with a positive connection to their land and heritage. Most participants come away from a Birthright experience and realise that is not a burden to be a Jew but rather a privilege.

One of the ways this connection is made is through the Mifgash. “Mifgash” is the loosely translated Hebrew word for a “meeting,” that is in this case a direct physical encounter between Israeli and American peers during the Israel trip.   The Mifgash enables Israelis and Americans an opportunity to spend time getting to know one another in both formal and informal settings. The Mifgash is a uniquely effective pedagogical tool for increasing the participants’ understanding of one another. It is a structured encounter between individuals and also, a meeting of two worlds.

Max, after meeting these special young men and women, and hearing the stories of those who gave their lives for our freedom during the visit to Mt. Herzl decided that passive Judaism is an oxymoron. He realised that “to Jew is to do!” He was inspired by the words of another American Lone Soldier, Michael Levin, who gave his life for the defense of Israel in 2006 during the Second Lebanon War. Michael wrote:

You can’t fulfil your dreams unless you dare to risk it all.

Max died as he lived, leading by dugma ishit (“personal example”). Zionism gave a meaning to his life and he gave a meaning to Zionism by his life, and ultimately with his life. It does not matter how long one lives, what matters is what one does with ones life. Max lived a full life with no regrets. May his life and memory be for a blessing.

Remember that there is meaning beyond absurdity. Know that every deed counts…Above all, remember that you must build your life as if it were a work of art.”