The State Department’s deputy spokesperson, Mark Toner, declared this week in connection with the new construction in the Shiloh Bloc that

this settlement’s location deep in the West Bank, far closer to Jordan than Israel,

He is, I will admit, correct.

Here’s a roadmap (no not that one) from Shiloh to Fatza’el, where a friend hails from, quite near Highway 90, the Jordan River Valley road, 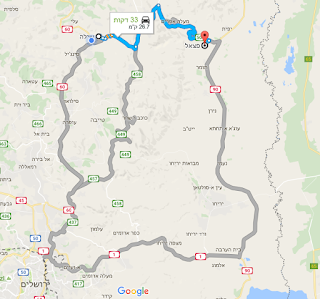 and the distance is almost 27 kilometers.

To Jerusalem, at the bottom, this distance from Shiloh, is 46 kms and if no roadblocks, firebombs and stones, not to mention regular traffic problems, it’s about a hour.

Once the rail line is finished, time-wise, we’ll be there to the former, and by then long-forgotten Green Line, almost in no time, we trust.

And as a rocket flies, Shiloh acts to make sure those dangerous armaments stay far away from Israel’s main population centers.  And that’s quite an important “distance” measurement factor.

One more thing, as I’ve told almost every single journalist who has interviewed me here in Shiloh, my community village is not far or distant from anything.

It is right in the middle of the Land of Israel.  We are not “deep in the West Bank”.

That is its main geographic factor.

Remember that Mr. Toner, and State Department officials in Washington and in Jerusalem (even if you cross off “Israel” from press releases and move Mt. Herzl cemetery to Tel Aviv).