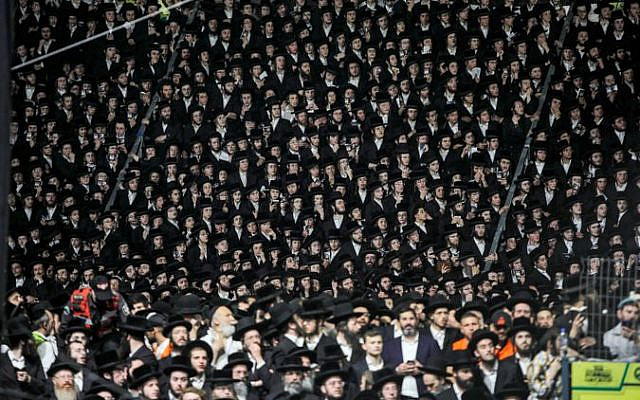 The 45 bodies have been buried.  Hundreds of family members have completed their shiva for the victims.  And while the news in our community has recently focused on the thousands of rockets launched by Hamas that terrorized Israeli citizens, and the wave of anti-Semitism that has surfaced in the United States, I’ve personally been thinking a lot about the dozens of individuals who lost their lives on Lag b’Omer in Meron.

Not surprisingly, many rabbis have suggested that there was a spiritual shortfall in our community, which was responsible for this horrific tragedy.  One Hasidic rabbi said it was men and women mixing together at Meron that was the reason why this heartbreaking episode happened — even though there wasn’t a woman in sight at the Lag b’Omer event.  Other rabbis blamed sinat chinam within our community; still others pointed to women not properly covering their hair as the reason why 45 innocent victims were crushed to death.

The idea that a particular rabbi knows the reason why God acts the way he does is not only theologically problematic.   It’s also terribly insulting to any believing Jew — and particularly hurtful to the families who lost their loved ones at Meron.  What’s even worse is trying to explain a spiritual cause for a tragedy instead of looking for a physical cause … or ignoring the physical cause completely. That’s exactly the opposite of how Hashem wants us to act.

When a situation exists that puts individuals in jeopardy, it is clear from the Torah that we must do what is necessary to prevent that danger from happening. That’s why we are specifically instructed to build a fence on a rooftop, in order that people won’t fall off the roof and die.  It is not enough to simply leave things alone and say that Hashem will protect us … that if someone falls, it is just the will of God.  Instead, we must proactively do whatever we can to prevent such an occurrence from happening.

Let’s be clear.  The fault of what happened in Meron lies mainly with the organizers of the annual event.  They allowed 100,000 individuals to enter a site that they knew could safely accommodate only 10,000 people.  The official engineer’s report specifically stated that the Toldot Aharon area of the site could hold a maximum of 3,000 people — yet there were an estimated 20,000 people in this location immediately before the disaster occurred.

Some Haredi leaders have blamed the episode on the police.  But it was certainly not all their fault.  For years, the Haredi authorities refused to give up any control of the site to government authorities, and blatantly ignored safety protocols that should have been in place — and that would have limited the size of the crowd.  Had they followed these rules (instead of maximizing the crowd), those 45 individuals might still be alive today.

Yet many in the Haredi community refused to discuss the possibility that mistakes were made that led to this incident.  One leading Haredi columnist suggested that the investigations and articles about the cause of the tragedy were a smokescreen, and the real question we should be asking ourselves is why God would allow such a tragedy to happen.

Sadly there are many others who prefer to focus on fixing our spiritual shortcomings rather than analyzing the decisions made that directly relate to the Meron tragedy.  Blaming the deaths of 45 innocent observant Jews on our own religious behavior instead of directing our attention to the organizers who encouraged massive crowds to visit Meron on Lag b’Omer is terribly misguided.

Fortunately, there finally seems to be some cracks in the Haredi position.   Rabbi Betzalel Cohen, a Haredi school principal in Jerusalem, wrote the following after the Lag b’Omer tragedy:  “I find similarities between the disaster in Meron and the conduct in Corona … both stem from the same worldview. The Haredi public is a champion when it comes to helping those who are in trouble, but is far behind when it comes to preventing safety, health or economic distress.  We hear the words of rabbis in the style of ‘God takes the best, and it is a Divine Decree.’  I understand that it is comforting, but when I hear these things, I explode.  In order to prevent the next disaster, we need to distinguish between an act of God and an act of man.”

Rabbi Joseph B. Soloveitchik, zt’l, famously said that asking why is the wrong question to be asking after an inexplicable tragedy.  Instead of asking why such a calamity occurred, explained the Rav, we should be asking ourselves what we should do now that such an event has happened.

So while there might be some in our community who are trying to answer impossible theological questions, I prefer to gain comfort in what I actually witnessed after this horrific incident occurred.  In Tel Aviv and Haifa, hundreds of secular Jews volunteered to give blood to their Haredi brothers.  In Givat Shmuel, a young man distributed free food to families with loved ones who had not yet made it home, who were too busy to cook for Shabbat.  Hundreds of strangers attended a funeral for a Jew from Montreal who had no family in Israel … in order to offer their final respects.

David Wolpe summed it up well: “Please don’t tell me that if I give more, pray more or become more, tragedy won’t happen. I have given and prayed enough for a hundred lifetimes and I still paid with the ultimate sacrifice.  I’m pretty sure that the families of the dozens of victims of Meron have done, prayed and given. What is not lacking is emunah. What is lacking is the simple task to do our earthly job of caring for others in the way humans should. We need to tend to our sheep before rising to holy heights. Let’s not let our heads rise above the clouds. We have very common humanly tasks to attend to here. Let’s do our hishtadlut before demanding mashiach and Hashem save us from ourselves.”