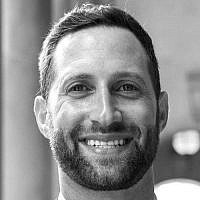 The Blogs
Oren Jacobson
Civic Entrepreneur, Consultant, and Policy Advisor
Apply for a Blog
Please note that the posts on The Blogs are contributed by third parties. The opinions, facts and any media content in them are presented solely by the authors, and neither The Times of Israel nor its partners assume any responsibility for them. Please contact us in case of abuse. In case of abuse,
Report this post. 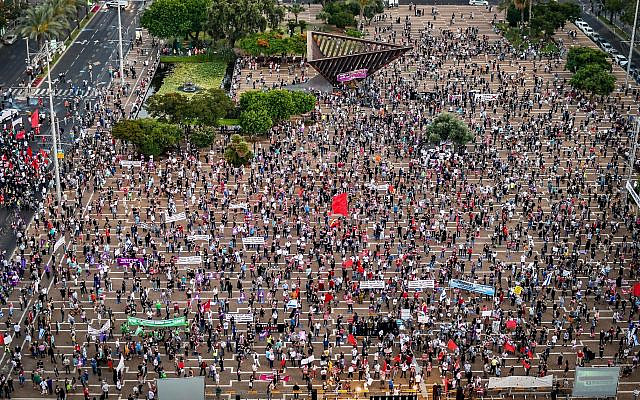 Thousands attend a protest against Israel's plan to annex parts of the West Bank, at Rabin Square in Tel Aviv on June 6, 2020. Photo by Avshalom Sassoni/Flash90

I am a Jew. I say that with tremendous pride. I’m part of deep, rich history which stretches back more than 4,000 years. We are a people who have suffered the very worst trauma imaginable, but have never lost our capacity to celebrate the joy that is life. Certainly, behind the joyful exclamation L’Chaim (to life) must be a lesson learned through thousands of years of persecution and pain.

Our focus on celebrating life isn’t the only lesson we’ve learned from our trauma. We’re also a deeply resilient people. This, above all, may be the thing which makes me most proud to be a Jew. With apologies to sacrilegious nature of defacing my own body, which our religious texts reject, I wake up proudly each morning to see the reflection of a tattoo on the left side of my chest which serves as a constant reminder of our pain and our resilience. It includes the Hebrew word for strength set inside a design that replicates the patch Jews had to wear on their clothes in Nazi Europe.

There’s a third lesson learned from our trauma which has moved front and center in my mind in light of the moment we find ourselves in. The greatest trauma in Jewish history have not simply been the byproduct of anti-Jewish hate. Not simply the byproduct of an antisemitic state or mob. It’s also been the byproduct of those who remained silent, too. What might have happened, I wonder, had more people spoken up against injustice when raising their voices may have helped prevent it?

It’s an impossible question to answer. Nonetheless, it’s a refrain that comes to mind for many in our community as we confront injustice around us in our daily lives. In fact, knowing what it’s like to be attacked, marginalized, and oppressed is often a driving force for our civic action.

Today, we are confronted with two distinct crises as a community. The first is how we will respond to systemic racism and the white supremacy which has fueled it in America. This question is made complex by the fact that antisemitism, and/or anti-Jewish bias, isn’t the problem of any single community, even though antisemitism always rises when white nationalism rises. Rather, it’s present in all eras, all nations, all communities, and all political movements, though its various manifestations shouldn’t be conflated as equal. Antisemitism is real and rising, and that creates understandable fear.

The second crisis is how we respond to the government of the world’s only Jewish state as it considers a unilateral move to annex portions of the West Bank. This question is made complex by the emotional ties we have to the people, the land, and our shared history. And, understandably, by the fact that we feel compelled to protect the right to national self-determination for Jews in a portion of our indigenous homeland after thousands of years of persecution. To us, this appears to be the only way to ensure Jewish safety and continuity as the world has shown us countless times it’s unwilling or unable to protect us.

As Jews in America, what are we called to do, by the Torah and our history, to address racism and the systemic causes of racial inequity in America? We know that, as a people, we cannot stay silent as Black lives in America are cast aside. And, we must do more than speak out, for saying Black Lives Matter is not enough. It’s not enough to confront police brutality, or individual racism. That’s the starting point. The finish line, which is far in the distance, can only be reached with sustained action to confront and change the stark reality that Black people today are likely to have disproportionately worse outcomes in virtually every aspect of American life. That reality is predicated in racist policies that must be addressed at every level of government. Do we have the will, not just the ambition, to meet this moment?

As Jews in America, what are we called to do, as part of a global Jewish family, though as people without citizenship or real power in another country, as we watch some in our family inch toward a precipice with annexation which threatens the concept of a Jewish and democratic homeland? By the analysis of the vast majority of Israel’s retired national security leaders, annexation risks plunging Israel into a future where the only way to preserve Jewish self-determination is to reject democracy. Consequently, annexation threatens core Jewish values and will cause additional unacceptable harm to the Palestinian people. While their mobility is already severely restricted, annexation could create a series of more than 100 disconnected Palestinian islands. It could dash their hopes for a state of their own, which would threaten the legitimacy and stability of their own government, and increase the risk of violent confrontation. And, most unacceptable of all, annexation could set off a chain of events which could permanently lock the Palestinian people into being ruled by a government they can’t vote for, living permanently as second class citizens with no democratic or civil rights. Can we really stay silent now when speaking up could prevent this reality?

I know how complicated and at times straining this work can be. In some cases, we risk tarnishing or losing relationships with friends and family over these issues. This complexity, in a way, is what inspired me to create a new approach to engage on issues of core concern to our Jewish community. And, it’s why I’ve started working with Jewish organizations to help them better understand these complexities and improve our bridge building and advocacy. No matter how hard, we cannot let our fears get in the way of the action we must take.

In order to rise to this moment, we must ground ourselves in our roots. Our history and our faith calls upon all of us to confront injustice when we see it. And it’s staring us right in the face. At home and in our ancestral homeland.

About the Author
Oren Jacobson is a progressive civic entrepreneur and organizer whose work spans local to international engagement. He’s the co-founder of Project Shema, which offers training programs to help Jewish organizations improve their advocacy with progressives on issues of core concern to the Jewish community. He holds a Master’s in International Relations from the University of Chicago, a Master's in Economics and Policy Analysis from DePaul University, and an MBA from Regis University. As a multi-sector consultant, Oren's professional work spans startups, Fortune 150 companies, non-profits, advocacy, and policy advising. For more information visit http://www.orenjacobson.com/.
Related Topics
Related Posts
Comments